You are here: Home / Shop / Special Items for Special Kittys / Trapped in the Trapacat – and Giveaway! 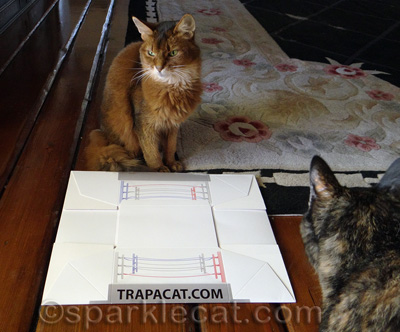 I was really hoping to review this Trapacat without any tortie intervention but I guess that was asking for too much. Just what is a Trapacat, you ask? It’s the most logical cat toy you could possibly think of: it folds into a box! 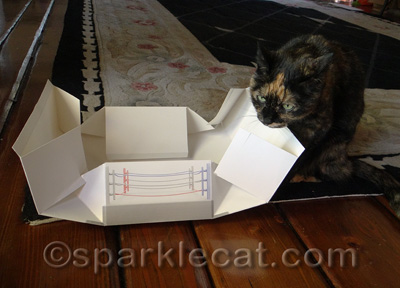 It comes flat and is fairly easy to assemble. It took a little bit of brain power from my human to get it right… and of course she only realized afterwards that there is a diagram right on the website! 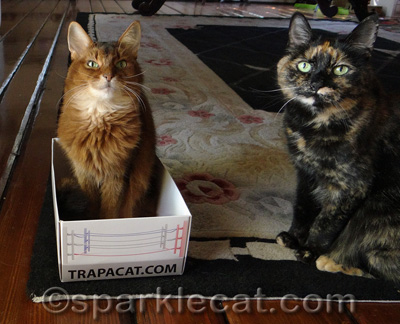 Ta-da! Done! And I got to hang out in it first. The Trapacats come in three different designs, the Beach Theme, the Jungle Theme, and the Boxing Ring theme. My human picked out the Boxing Ring because she thought there was a 50-50 chance there would be smacky paws over it. 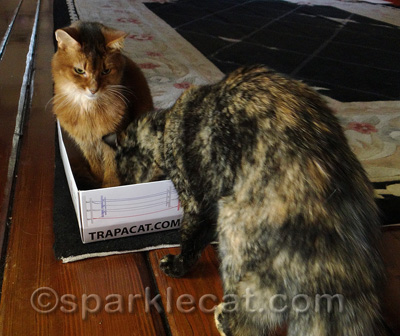 I did try to control myself… 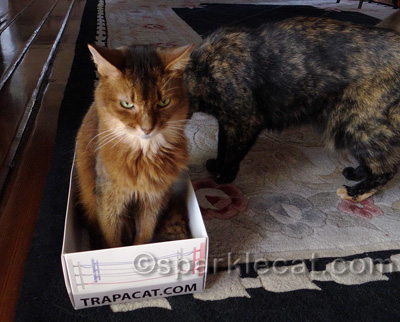 But somekitty was way out of bounds! 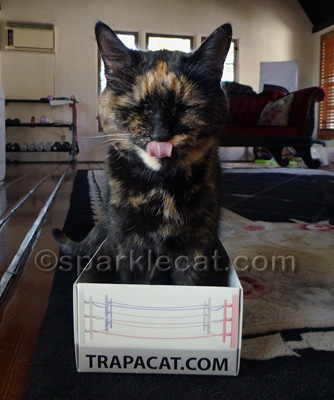 I only count this as a temporary setback. 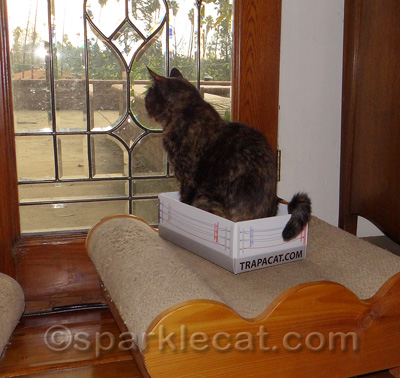 The Trapacat may seem like sort of a silly concept, but it really did work! During the time we’ve had the box it got moved around a few times, and somekitty would go hang out in it, no matter where it was. And my human liked that it looked nicer than the shipping boxes we usually want her to keep for us. It is a little bit of a tight fit for a large cat — Boodie sniffed around it, but so far hasn’t gotten in it (she prefers her boxes large). A big cat who likes a snug fit will like it, though. 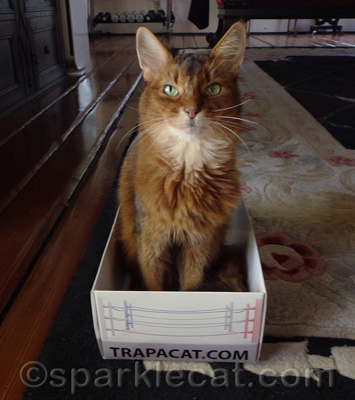 But the best news is that the Trapacat human said I could give one away to one of my readers! All you need to do is look at the Trapacat website and tell me in the comments below which theme you would like. Do this by midnight Pacific Time on Sunday, December 8 and I will randomly pick a winner! The company is located in Canada, so the giveaway is open to readers in Canada and the continental United States. Good luck!

Disclosure: I got the Trapcat for free from the Trapacat human and received a small compensation for my review. Opinions are strictly my own.