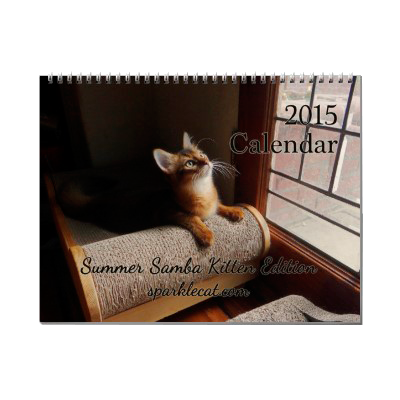 But just barely! My human was not going to make one because she had basically only three months of photos to choose from, and she actually hates doing them! According to her, this is the eleventh time she has said, “Never again!” Zazzle’s interface for putting images on their products is difficult and not very professional or exact and she hates that.

But then she realized she didn’t have a calendar for 2015 for herself! So she quickly made one up. There’s no text or cool sayings — just the best landscape-oriented photos she could find of me that could have “bleeding edges” (I still don’t know what that means). Of course, since it’s a calendar, she couldn’t put it together without messing it up — the first one, she accidentally used the 2014 Zazzle calendar template (why is that even still live?), so she had to delete that and redo it all.

But it’s done now, and it’s live on the Zazzle shop if you want one. She hasn’t proofed it because she just created it yesterday. But it should look fine, since she is used to how her photos reprint on Zazzle now.

You can see it, and get it here. And between now and December 31, you get 15% off with the code CALENDAR2015. Zazzle may have other deals for calendars at some point, but the 15% off one will be around for a while.