You are here: Home / Kitty Wisdom / Why Kitty Loyalty Counts 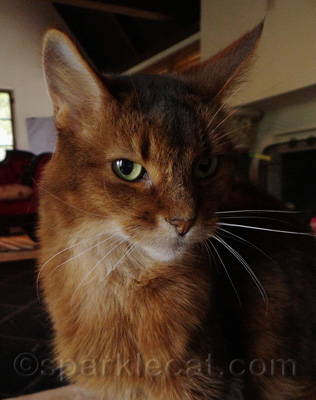 I read an article this week in the Pussington Post that debated whether cats or dogs are more loyal. The writer made some great points (in favor of us kitties, of course!), but I felt the topic deserved a deeper look — because I believe our kind of loyalty is richer and far more valuable than dog loyalty.

Dog loyalty is a very simple and uncomplicated thing, because it comes from instinct. Dogs are pack animals that work together in a hierarchy that makes loyalty a necessity of life. To go rogue and stray from its pack means a dog becomes less effective in providing for itself. So it is in a dog’s best interests to cultivate loyalty and to have it become part of its make up. Dogs don’t put any real thought into their loyalty. While dogs and humans can establish very tight relationships, at its very base, the beginnings of a dog’s loyalty is pretty meaningless.

Loyalty for a cat is a matter of choice. Yes, feral colonies do establish hierarchies, but it is more a matter of keeping things organized and avoiding fights rather than working together. Cats mostly work on their own, making plans and catching prey without answering to anyone or soliciting help. To gain a cat’s trust and loyalty, you must earn it, and unless she intuitively senses your goodness, the cat may take a good amount of time deciding. A cat makes a conscious decision to become loyal, and offers it as a gift that goes against her natural inclination.

So tell me, which do you think holds more value: the kind of loyalty that is ingrained and indiscriminate, or a loyalty forged by careful consideration?