You are here: Home / Kitty Wisdom / What Are Cat Shows Anyway? I Answer Some Questions 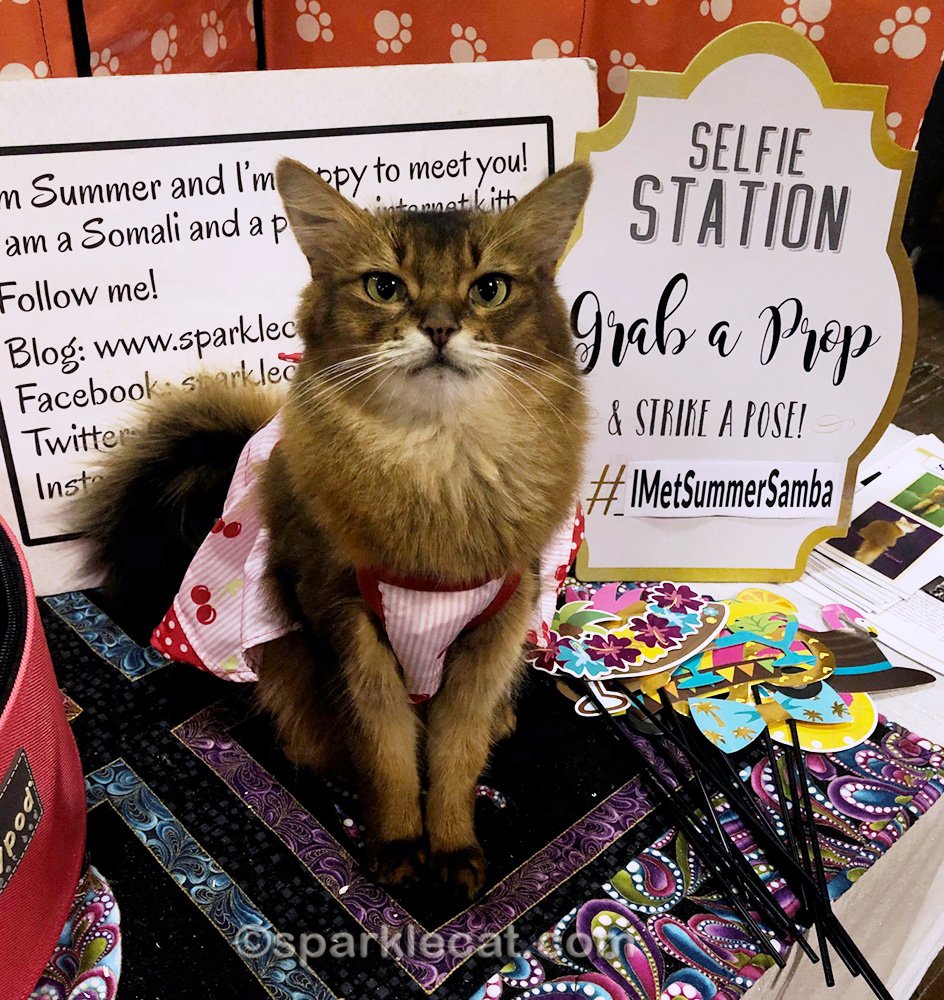 I’ve been writing about my cat show appearances for, basically, my whole life! But I don’t think I’ve ever explained fully what they do at cat shows, or even what they are. So I thought I would answer some questions you might have here.

What are cat shows?

The primary purpose of a cat show is to judge cats according to a set breed standard. The judges hand out awards to the cats that best represent their breeds at that particular show. This can change from show to show depending on the cats entered, and the condition and presentation of the cats. Sometimes a cat will show well at one show, but not so well at another.

These awards are important to breeders. The prestige of a national or international award winning cat means their kittens will be in greater demand, and they are upholding the standards of their breeds.

So… cat shows are only for pedigreed cats?

Nope! There is a Household Pets category for non-pedigreed or mixed breed cats. These judging rings are the most fun to watch, since the cats are judged on personality, presentation, and how they carry themselves. The judges really enjoy the household pets, and some cats have their own little cheering sections. Plus some cat rescues will enter more outgoing cats because all the Household Pet cats get ribbons even if they don’t get in a final. And let’s face it, who wouldn’t want to adopt an award-winning cat?

What’s the deal with the judging rings?

There are usually between four and six rings at a cat show, and there is one judge in each ring. (Unless there is a trainee judge. Then he or she will be there alongside the more experienced judge.) Each judge has a long history in cat fancy, and went through an extensive training process once they decided to pursue being a judge.

There are different classes of cats at each show. The main ones are Kittens, Cats (intact pedigreed cats over 8 months of age), Altered or Premiership (pedigreed cats that have been spayed or neutered, Household Pets, and Veterans (pedigreed cats over 7 years of age). The judge in each ring will go through the classes and judge all the cats. Then they will look at the scores they’ve given out to decide which are the best cats in each class. Depending on the number of cats entered, there can be a top five, top ten or top fifteen in each class.

Because judging is subjective and cats aren’t always predictable, cats will often get different scores from different judges. Plus at a certain level of excellence, sometimes it’s difficult to decide on one cat over another. But usually a cat that does well in one ring will place in at least a couple others.

Why are the cats’ owners so grouchy?

I’ve heard that question a lot from attendees, and it’s a reasonable complaint. But if you look at it from the owner’s perspective, it starts to make sense. The owners who enter the cat shows have spent a lot of time grooming their cats to perfection. In the case of a longhaired cat like a Persian, that can mean hours of work! And they may have spent several hundred dollars to travel to the cat show, not to mention the cost of the entry fee. They are very focused on making sure their cat is at the top of their game in the judging rings. That is their priority.

So here comes a spectator, asking questions and wanting to pet their cat. The owner may be listening for the call to take their cat to a ring, or preparing their cat for a call already given. So they may not have time to answer questions. And as for touching their cat, that is just not going to happen. On top of potentially messing up the groom, they don’t know where your hands have been. Many owners are also breeders, and if you’ve touched a cat that is carrying a disease, and then touch their cat, you could make that cat sick. Even worse, that cat could bring home a disease to any kittens they may have at home. And that could be deadly, since young kittens haven’t developed their immune systems yet.

So this is why many owners are short with the spectators. Also, they are mainly regular people with day jobs, or who are retired and devoting themselves to the hobby of cat fancy. They don’t necessarily have great people skills. I hope this helps you to understand better. So don’t take their behavior personally.

Is this why there are Pet Me and Ambassador Cats at the shows — for the spectators?

That’s right! The cats in the Ambassador program are there to interact with attendees, and their owners can answer most questions the attendees have about cat shows, breeds, and often cats in general. I’m proud to be one of them. In fact, I’m a bit special because I do tricks, happily wear outfits, and I’m friendly! That’s kind of like a kitty trifecta. Plus I have a fairly large social media platform, and I draw people as something of a celebrity. People who only know me from Instagram or TikTok but have never been to a cat show before have come to see me.

Did I answer your questions? Or do you have more to ask? Let me know in the comments! I may do another post. 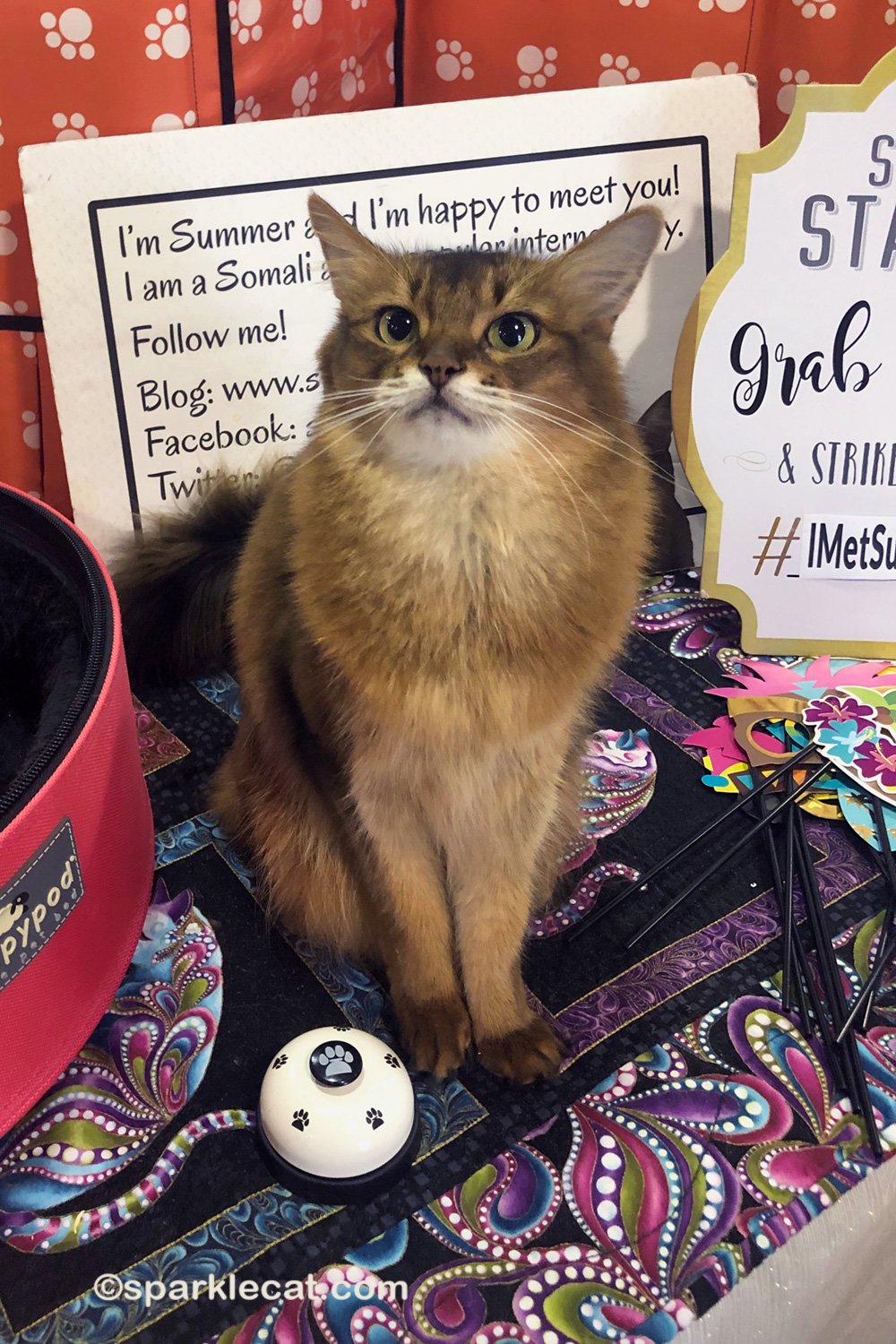