You are here: Home / Kitty Wisdom / Going Before You Go, or Using the Litter Box Before Traveling

One of my readers (from When the Cat Is Away) asked yesterday how my human gets me to use the litter box before traveling. When I first came to live here, my human had the same question! She asked on a private therapy cat Facebook group, and one of the members told her what she did. So I am passing along the information to you. 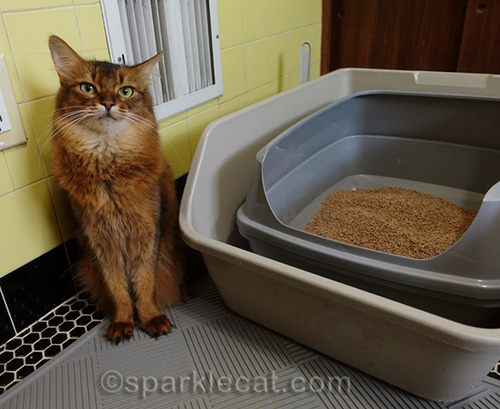 The whole process of getting me to use the litter box started before I even went anywhere! My human kept track of when I used the litter box. Whenever she saw me there, she would tell me, “Go potty.” (She actually thinks it is a silly thing to say, but that’s the phrase the other therapy cat human used and she couldn’t think of anything better. You are welcome to use whatever you want. I hope you come up with something just as brief but maybe more eloquent.) Then after I went she would pet me and praise me and say, “Good go potty!” She did this every time she saw me in the litter box… in fact, she still does it.

This has basically become one of our many routines, and that is part of the secret. Cats thrive on routine. When you make something into a routine, it becomes a part of our life and we find comfort in the repetition. So keep in mind that everything that follows has also become routine with us. We follow the exact same steps, with slight modifications depending on where we are going, and for how long. 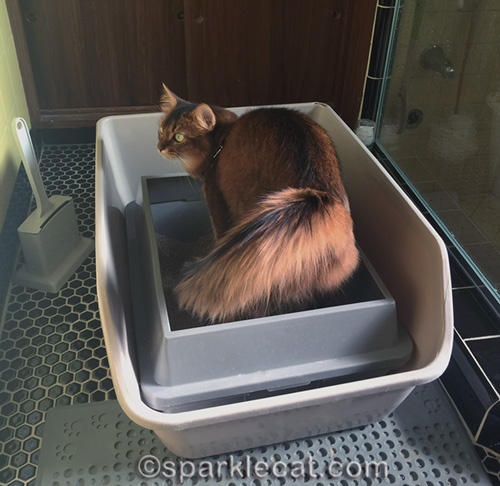 Eventually, my human would try to predetermine when I might want to use the litter box, and now and again she would place me in the litter box and ask me to “Go potty.” (After so much observation, she often guessed right.) If I did, she would praise me when I was done. This was how the two of us practiced before I ever traveled.

Then, when my human started taking me out places, the final thing she did before we left was place me in the litter box and tell me, “Go potty!” Since we’d been practicing this for a while, I knew exactly what she wanted me to do. I also knew that I’d get praise when I finished. So I went.

At first, my human wasn’t consistent about putting on my harness before our litter box routine, but now she always puts it on me first. That way I know she’s putting me in the litter box because we are going somewhere. It’s a signal that I’d better use the litter box now because I won’t get to again for a while. 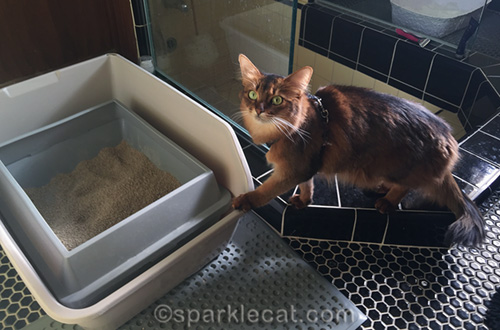 Do I use the litter box every single time? No, because I don’t always need to go. And sometimes I dawdle because I don’t really need to go that badly. My human always saves an extra ten minutes of travel prep time for me to use the litter box in case I don’t go immediately. She says it’s the equivalent of kids not wanting to use the bathroom before they go on a trip. Putting me back in the litter box a few times is like a parent saying, “You’d better go or you’ll be sorry!” (I bet some of you humans out there heard that one when you were kids… maybe you even used it on your own kids!)

The funny thing is that I know how long I’m going to be away from home, and I behave accordingly. If my human is messing around with my therapy cat bag, or she has not been packing a suitcase, I know I won’t be gone for all that long. So I don’t always use the litter box if I don’t really feel a need. If she is packing up stuff, then I know I have a travel day ahead of me, and I almost always go those times. When I was coming back from St. Louis on Monday, I used the litter box right before we left, even though I had already used it just a couple of hours earlier. I knew we were leaving.

So that’s the routine. Here is an extra-added trick that my human uses to discourage me from peeing in the carrier. She slips me in and then gives me one of my favorite treats in the carrier. Instead of letting me take it from her hand like normal, she puts it on the bottom of the carrier. She knows that we cats don’t like to relieve ourselves where we eat, so this shows me that the carrier is not meant as a litter box. She still lines it with a pad, though, just in case!

I hope you found this helpful, or at least interesting, since I know some of you were wondering about this. 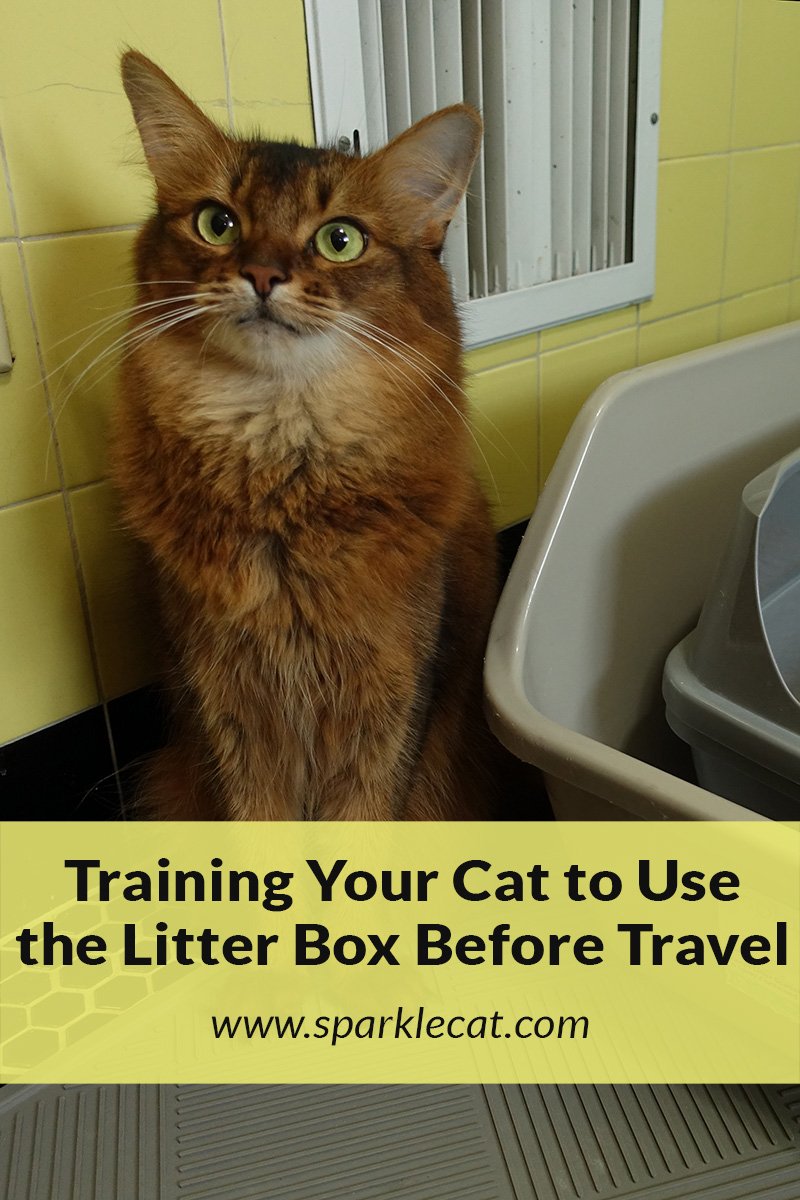