You are here: Home / Kitty Wisdom / Update on Bono 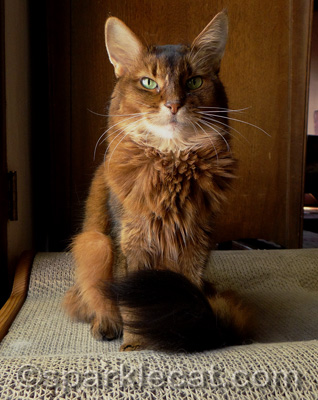 It was a funny coincidence that I mentioned recycling cats in my Earth Day post yesterday, because later on, I found out what happened with Bono, the gorgeous black rescue kitty being fostered by best-selling author Helen Brown!

First off, I want to say that my readers are awesome! You all worked very hard to find Bono a home! My blog post about him was shared 290 times on Facebook! My friend Dash and his human worked extra hard on Twitter to get the word out, which is really cool because they live in New Zealand, which is where Helen Brown was originally from (she now lives in Australia). Bono became an international sensation, thanks to you! Of course, the only thing that mattered was finding one single family in New York that was willing to share their lives with Bono, knowing that his chronic renal failure would probably shorten the time they had together.

As you have probably figured out, yes, Bono did find a home! Monique, an oncology nurse, was drawn to Bono by Helen Brown’s Huffington Post blogs about him, and by all the social media attention he had received. And it had been five years since she lost her beloved cat Onyx. Monique loves house panthers… don’t you like her already?

Well, when Monique came over to Helen Brown’s apartment, Bono decided he liked her too! They connected immediately and almost mystically, and as soon as Monique’s husband agreed, they adopted him! You can meet Monique and find out the whole story from Helen Brown herself in her Huffington Post story. 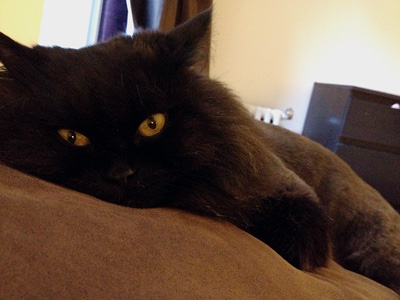 Good luck and happy times to you, Bono — you deserve them!