You are here: Home / Kitty Wisdom / Twenty Years Ago Today 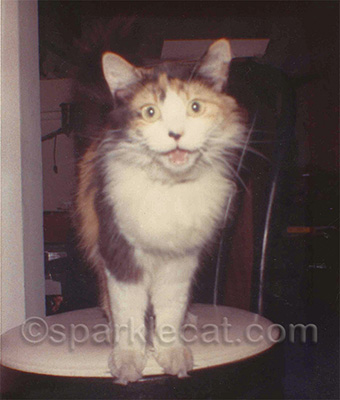 Anybody, human or animal, who lived in southern California in the mid-1990s remembers what they were doing 20 years ago today. On January 17, 1994 at 4:31 A.M., Los Angeles was devastated by the 6.7 Northridge earthquake. My human, who has lived in Los Angeles her whole life, certainly remembers. The only thing is, she was not in L.A. that morning.

It was sometime after 7:30 A.M., Eastern Time, and she was on a couch belonging to a couple she knew who lived in Astoria, New York. She had just spent nine days doing business in New York City, interviewing the metal band Pantera for a magazine cover story, visiting band guys she knew and ending her trip by spending a couple days with her friends Mike and Daina (since divorced). She was waiting for the car to come pick her up and drive her to JFK airport and Mike switched on the TV… and there was Los Angeles in rubble and flames!

My human immediately called to see if her flight had been cancelled. It was still on schedule, customer service told her, so she headed right for the airport… where she found out the flight was cancelled after all. It took eight and a half hours before she was able to get a flight back home. Eight and a half hours of alternately sitting at the bar and trying to call friends, family and coworkers to make sure everyone was all right. (She even called the teachers of the meditation group where she later wound up taking home a foster cat.) Everyone she reached was okay, if shaken up. The only one she couldn’t call, however, was the one that mattered most: the cat before me, Harlot. She had no idea where Harlot was or if she was safe.

Although my human has been a big proponent of indoor-only cats since she can remember, Harlot paid her no heed. She was happiest as a mostly-outdoor cat, having adventures, hunting small game and chasing other cats off her territory. Whenever my human went out of town, whoever was living in the sublet attached to her house would feed Harlot, but she would spend nearly all her time outside, making her rounds and keeping an eye on things. There was really nobody, however, to keep an eye on Harlot, and that’s what worried my human. While she was waiting for a flight home, she did get hold of Pete, a guitar player who was the current sublet resident. He said things were calm at the house, but there was no word about Harlot.

So after an eight and a half hour wait at JFK, then a five hour flight home, my human finally set foot in Los Angeles. A mysteriously dark and quiet L.A. She had possibly the worst shuttle driver of her life taking her home. It took an hour of wrong turns and almost-accidents before she was finally standing in front of her Silver Lake home, suitcase in hand and heart in her throat. She lugged the suitcase up the long, winding walkway, up the hill past the brush and trees up to her house — a familiar post-trip routine under the most unusual of circumstances. The silence was even spookier than the usual rustling of night creatures. Until finally, my human neared the base of the staircase leading up to her door. A sweet and slightly whiny meow called out. It was Harlot, wondering where she had been and what took her so long.

It was possibly the happiest reunion my human had ever had.

The odd thing about that earthquake: up until then, whenever the earth shook, it would send Harlot flying under the bed. She was deathly afraid of earthquakes before the Northridge quake hit. But when my human arrived home that night, she realized that everything was going to be all right. And for the rest of her life, every time there was an earthquake, she stayed by my human. She knew that as long as she was there, she was safe.