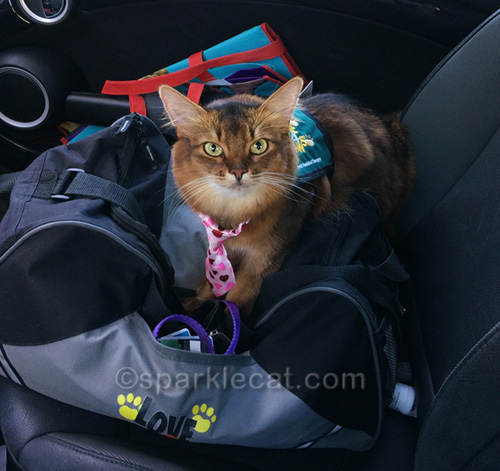 You might recall that a few weeks ago, my human and I spoke to a group of Boy Scouts about the differences between therapy pets, emotional support animals, and service animals. They were still a little confused. A lot of people seem to think the terms are interchangeable, but in the United States, the three designations are very different, and with each one, the cat, dog, or other animal provides services that are specific to their category.

To clear up any confusion, I decided to put together this tutorial that explains the differences. That way, if you know anyone who has questions or doesn’t understand the designations, you have somewhere to point them!

Therapy Pets, like me, visit people in nursing homes, hospitals, schools (special and regular), colleges, and anywhere else where there are people who are stressed out, suffering from depression or need some fur therapy. Spending time with dogs or cats can lower blood pressure and release endorphins to help calm humans in distress. We therapy pets have gone through an evaluation process for temperament and interaction with people, and we usually belong to either a national organization like Pet Partners or Love on a Leash, or like me, are part of a local group. Therapy pets that are associated with an organization or group are insured for their assigned visits.

In addition to dogs and cats, therapy pets can be other species — bunnies, horses, even lizards or snakes! But most often therapy pets are dogs, and sometimes cats. Therapy pets work as a team with their human, and the work they do is on a volunteer basis.

Therapy animals are allowed in facilities that have contracted with their organization for their services. Other than that, they have no special rights as far as places they are allowed to go. In every other instance, therapy pets are like any other pet, with the same rights and restrictions.

Emotional Support Animals have been prescribed by a therapist for a patient that needs an animal for comfort. They are allowed on airplanes for free, and can sit on their human’s lap during the flight. They are also allowed in housing that normally does not accept pets. These are the only two permissions that an emotional support animal has. Outside of these, they have no more rights than any other pet. Emotional support animals are generally dogs or cats, but they can be other animals too.

You may have seen the news item a while back about someone who tried to get their “emotional support” peacock on a plane. In fact, a lot of people try to get their pets on flights for free by claiming they are emotional support animals. I can’t say I blame them — the airlines charge anywhere from $95 to $125 — or more! — for small pets to fly in the cabin, each way. That means if my human and I are flying somewhere close like Phoenix or San Jose, it could cost more for me to fly than her own ticket. That is wrong, but it does not make what these fakers are doing right. Unless you have a letter from your therapist saying you need your emotional support animal for flying or housing, you do not have a real emotional support animal, no matter how good they make you feel. So please, either get the paperwork or stop claiming your pet is something she is not. Don’t just get your cat or dog a vest and make things up. Meanwhile, if you don’t like the airline fees, work to make them change it to something more reasonable like $25. I bet if they lowered the fees, there would be a lot fewer “emotional support animals” coming on board.

Service Animals are the only ones who are allowed in many public areas where pets usually aren’t welcome. That’s because they have specific tasks they perform, such as helping their blind or wheelchair-bound human get around, signal if their humans are about to pass out, fetch meds for their human, and many other duties. For a person who is disabled, their service animal is their lifeline, and that is why they are allowed to accompany their humans to so many places. Being a service animal is a very important job, and a lot of training is involved.

Right now, only dogs are designated as service animals under the ADA (Americans With Disabilities Act). Occasionally miniature horses serve too. Technically, cats can’t be service animals, at least not according to the ADA. But there are some — you may know my pals Deztinee and RaenaBelle who blog at Dezizworld. They do a lot of things for their human! Although they have to be considered emotional support animals because the ADA won’t recognize them as service animals, they go way above and beyond what an emotional support animal does.

If you are out and you see a dog with a service animal vest, you should never, ever try to pet it or distract it in any way. A service animal is not a regular pet, but a working animal, and is busy helping its human. (That is the big difference between service animals, and therapy pets — we therapy pets are meant to be petted and cuddled!)

There are not that many service animals around, and because what they do is so essential for their humans, you should never try to pass off your everyday pet as a service animal. I think I’ve made the difference really clear, so now you have no excuse.

I hope this helps! Now that you know, you can help educate others too. 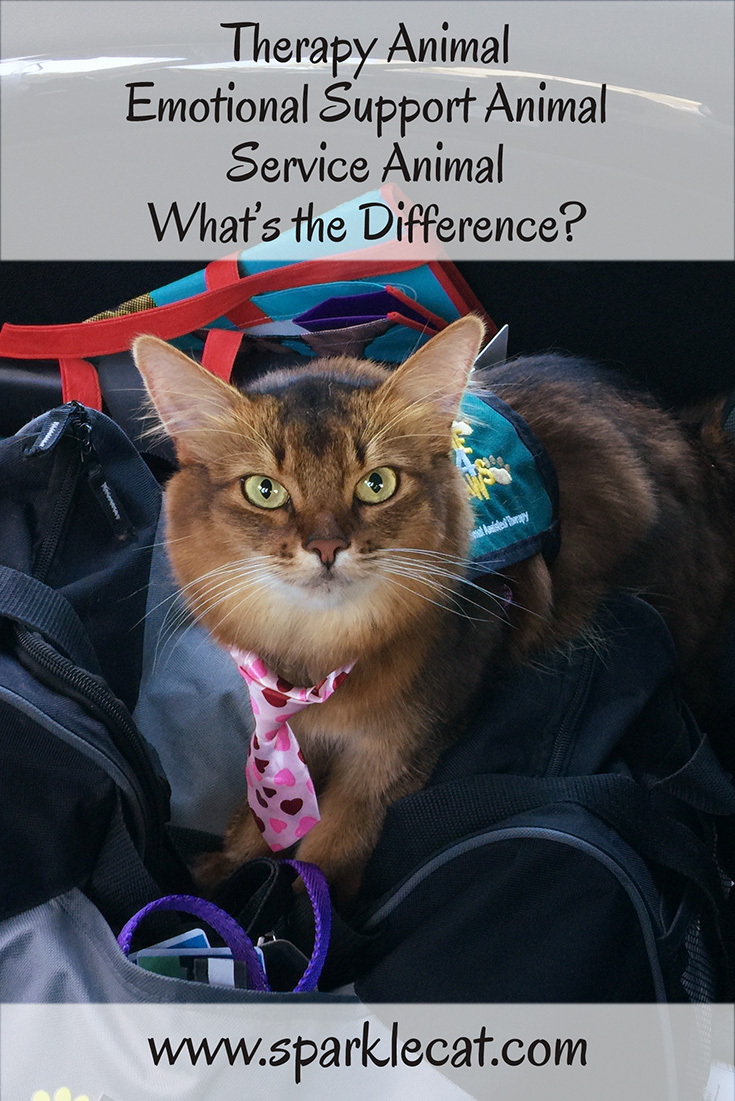