You are here: Home / Kitty Wisdom / The True Christmas Spirit 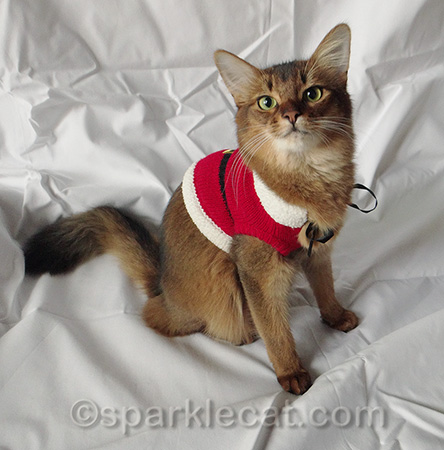 As many of you may have gathered, we are not really having Christmas here. My human wanted to put up the fake tree and the decorations, but she had so much work to do on the cat rescue anthology that is coming out at the end of January that she never found the time. And the humans here are having a pretty awful year financially for a bunch of different reasons, so they aren’t even giving each other gifts, much less anyone else. And I decided that instead of gifts for myself, I wanted to help other kitties who don’t have homes yet — and that became the Santa Kitty Toy Hop. So even there had been a tree, there would have been nothing to put under it this year.

But as you know, the spirit of Christmas, and the whole holiday season, isn’t really about getting gifts at all. Some say it’s about giving, but that’s not quite right either. The true spirit of Christmas, especially for secular households like the one I live in, is both simpler and deeper. Christmas is about caring.

Caring does not necessarily have anything to do with gift giving. It is about being thoughtful and looking out for your fellow creatures. My human says that when she brought the toys for the blog hop to the Kitten Rescue kitties, it wasn’t the toys that were important, but the time she took to play with the adult kitties, who don’t get enough interactive play in their life. Just giving a gift does not do that. Taking action to make someone’s life better, even if it is not costing you anything, is what is important.

So this Christmas, think about what you can do to make someone happy, or to help them if they are suffering. It does not have to be money or stuff. It can be words. It can even be sitting and just being there for them. I do a lot of that with my human. And actually, I think she needs that more than she needs a lot of the other things she thinks she does. And I have a sneaking suspicion that she knows it, too.

Merry Christmas. Happy holidays. Let the spirit of the season live within you. Now can I take off this Santa sweater? I outgrew it about three months ago!