You are here: Home / Kitty Wisdom / The Rescued Cats and Their Causes, Part 2 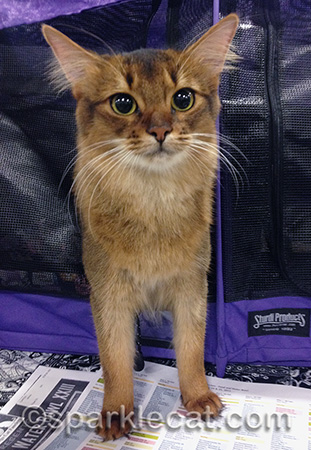 Here I am, reporting from the San Diego Cat Show! I’ll tell you all about it tomorrow, but right now, I’m sure you want to hear about the rest of the cats who have stories in Rescued, and the rescues they are supporting! If you recall from Friday’s post, there are 12 rescues, one for each author, and each author was assigned a month to promote the book, with a third of the profits from that month going to the rescue. On Friday, you met the cats from February through July, 2015. Now here are the rest.

Tuffy’s month is August 2015, and he is supporting Friends of Feral Cheshire Cats. Tuffy, like so many cats, was callously discarded by his former humans. Fortunately, he discovered a new home, with humans that were willing to accept him on his own terms (well, sort of). Now he is the muse for a series of cozy mysteries. Tuffy has his own Facebook page.

Michael’s month is September 2015 and he is supporting Stark County Humane Society. Michael had quite a life — He traveled from Florida to Mississippi to Ohio to Mississippi and then back to Ohio. Michael lived for 19 years and had more than the usual nine lives.

Magoo’s month is October 2015 and he is supporting Valley Cats Cat & Kitten Rescue. Magoo may not be a big cat but he has a big attitude! This swaggering guy was found on the streets and his larger-than-life personality inspired his human to become an amazing cat rescuer. Thousands of cats he will never meet (and a few foster FAILs) have Magoo to thank for their lives. Magoo has his own Facebook page, plus a blog he is working on (he’d kill me if I neglected to mention this).

Gemini’s month is November 2015 and she is supporting Purrfect Pals. Maybe you recognize Gemini — she’s the quieter sister of Chey of the blog The Cat Post Intelligencer. But don’t let her sweet face and good looks fool you. She has always known her own mind, from the time she was a tiny kitten, lost in the rain. She was looking for her mother, not a human and she was quite firm about that. Of course, just because she knew her own mind, it didn’t mean she always got her way.

Rascal’s month is January 2016 and he’s supporting Santa Cruz County Animal Shelter. You may know Rascal and his brother Rocco from their blog. But you may not know where they came from. Twice they had nice lives with senior humans, and twice they lost their humans to elder care facilities! What a traumatic experience for them, and there they were, stuck in a cage once again, hoping that they would be chosen instead of some younger, cuter kitties. It’s the kind of story that is repeated in shelters every day.

Harriet’s month is February 2016 and she is supporting PAWSitively CATS No-Kill Shelter (which also happens to be her home). This sweet-faced girl was permanently disabled when she was protecting her kittens from a dog. This story could have had a bad end, but she wound up in the right hands. She was able to raise her kittens and happily watch them find new homes, and now she is the sweetheart of the shelter she is supporting. This giving girl not only tells her own story, but shares a little bit about some of the other cats she calls friends. I’m sure you’ll love her as much as I do!

Those are the cats of Rescued. Maybe you are wondering what happened to December 2015? It was left out on purpose! My human knows from her experience in the world of publishing that December is a huge month for book sales and that any cat given that month would give their rescue an unfair advantage, so she held it back and is using it as an extra-added incentive to the authors. The author who sells the biggest number of books in their own month will also see December’s donation portion go to their rescue. So she was not kidding when she said that this book’s promotion is a year long!

If there is a cat whose story really speaks to you, or you think highly of their rescue, I do encourage you to share the book with those you know during their month. Or if there are several, you can keep sharing because you know people don’t always buy something the first time they hear about it. If you are a blogger, you can write about these cats or the humans who helped them write their stories — not all, but many have agreed to interviews. And you can support them now by giving something to Rescued’s Pubslush crowdfunding campaign. It is still less than halfway to its goal, and the more money it brings in, the more expenses get paid and the sooner the writers and the rescues will see money! There aren’t just book-buying options. There are also art and graphic options, and you can even have a short story or chapter edited by my human! Even the smallest reward levels help.

I will be doing my part — expect to see each author profiled here during their month — and I will write a little bit about their shelter too!