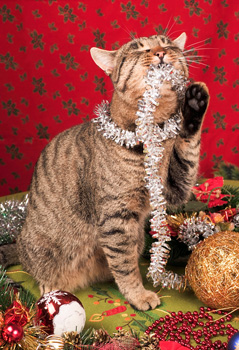 It happened while the family was decorating their house for Christmas. They went out for a while and came home with a tree that was taller than the Dad. Bad Kitty watched with big eyes. It was the most wonderful thing he had ever seen. As the Mom and the Dad were putting up the tree, he ran around their feet and tried to play with the branches. The pine scent made his nose tickle and he sneezed.

“Ryan, could you take the kitty to your room until we are finished getting the tree in the stand?” asked the Mom.

Ryan took Bad Kitty to his bedroom, along with Bad Kitty’s favorite toyÂ â€” a long plastic stick with a lot of feathers on one endÂ â€” and they played until the tree was ready to be trimmed.

“We have to do something different this year,” the Mom told Ryan and Emma. “We can only put plastic ornaments on the bottom branches of the tree. We don’t want the kitty to knock off any ornaments that can break and hurt him.”

It was while Ryan, Emma and Bad Kitty were choosing ornaments that the phone rang. The Mom answered it in the kitchen, and Ryan could hear her talking.

“Yes, with a black tip on his tail. He’s very cute. I found him, or I should say, my son found him outside the school. Really? Are you sure? Really sure? Well, what’s his name? Okay. Thank you. Good-bye.”

The Mom came back to the living room with a strange look on her face.

“That was the kitty’s owner,” she said.

Everyone looked up at the Mom with worried expressions. Even Bad Kitty. He could tell something important was happening.

“Yay!” Emma squealed, and Ryan was so relieved he didn’t even get mad at her.

“But why don’t they want him?” he asked.

“The lady said he was too rambunctious,” said the Mom.

“It means he gets into too much trouble,” said Ryan, proud that he knew. “That is just silly. He’s curious and playful. That’s all.”

“Did his owner tell you what his name was?” the Dad asked.

“Let’s see what the kitty thinks,” said Ryan. He crouched down and petted Bad Kitty. “What do you think, Fred? Freddie? Freddie-boy?”

“I guess that settles it,” said the Mom. “Freddie it is.”

Freddie sneezed in agreement and everybody laughed.

But it wasn’t the tree that was making Freddie sneeze. He began sneezing more and more over the next couple of days, and his eyes began to water. He stopped playing with Ryan and did not jump on the kitchen counter even once. Instead of knocking the plastic ornaments off the Christmas tree branches, he slept next to the presents. He wasn’t even interested in scratching on the new cat tree that the Mom and the Dad brought home for him.

“Let’s take him to the cat and dog hospital and see what they say,” said the Mom.

Freddie did not complain when the Mom bundled him up and put him in a cat carrier. The Mom dropped off Emma to play at a friend’s house, but she said Ryan was old enough to come with her and Freddie.

At the cat and dog hospital, Dr. Lowen examined Freddie. She listened to his heart and looked in his mouth and ears. Freddie did not complain. He just looked sad.

“Freddie is a very sick boy,” Dr. Lowen told the Mom and Ryan. “He has a nasty upper respiratory illness.”

“It’s like a cold, only worse,” Dr. Lowen explained. “If he was any sicker, I would want to keep him here. But I will let you take him home with some medicine. If he doesn’t start getting better in a few days, please bring him back.”

Freddie only struggled a little bit when the Mom and Ryan gave him his daily dropper full of medicine, but he did not get better or worse. He just looked sad and watery-eyed.

“Is Freddie ever going to get better?” Emma asked.

“But Christmas is day after tomorrow,” said Ryan. “What if he gets sicker and they’re closed?”

“I don’t know,” said the Mom. “We will either have to wait or take him to the emergency pet hospital.”

The next day was Christmas Eve, and even though Ryan and Emma were excited, they were still worried about Freddie. Freddie continued to sleep a lot under the tree. He was very quiet. Ryan slid under the tree and scratched Freddie under the chin.

Freddie stretched out one long, striped paw and pushed his head into Ryan’s hand.

Emma helped the Mom put out a glass of milk and the Mom’s special sugar cookies for Santa. Then she and Ryan reluctantly went to bed. Ryan looked back at the Christmas tree, but he wasn’t thinking of the presents he was getting in the morning.

The Mom and Dad went to bed a little while later. Before the Mom turned off the Christmas lights, she kneeled down and stroked Freddie on his cheek.

The house was dark, but Freddie had a hard time sleeping. He had slept so much, he was starting to get bored. He stood up and stretched his front paws out as long as he could. Then he batted at an ornament that glittered in the dim glow from one of the outdoor lights. He sniffed the sweet pine smell of the tree. It reminded him of that time, long, long ago when he was a kitten and lived outdoors. He wondered what it would be like to climb the tree.

Slowly, he got up on his hind legs and began grabbing at branches with his front paws. It was fun! He climbed higher and higher up the tree, playing with the silvery garland and batting at ornaments that bobbed back and forth. About halfway up the tree, one of the ornaments Freddie pawed at fell to the ground with a crack! The noise startled him and he tried to scramble away, but he got stuck in the tree. Suddenly he felt the tree start to topple over. Freddie panicked and pushed away from the tree with his strong hind legs. The tree landed on the floor with a crash and tangled up Freddie in its branches.

As Freddie struggled to escape, the living room lights came on.

“It’s Santa!” yelled Emma as she ran in from her bedroom.

Freddie poked his head up from the ruined Christmas tree, bright-eyed and surprised.

“Freddie! You knocked down the tree!” said Ryan.

“Isn’t that great?” he asked the Mom and the Dad. “That means he’s feeling better!”

“Well, I don’t know how ‘great’ it is,” said the Dad, “but it is good that Freddie is feeling better. We were worried about him.”

Ryan scooped up Freddie and hugged him. “No he’s not. Who cares about a dumb Christmas tree anyway? Freddie is the best cat ever!” 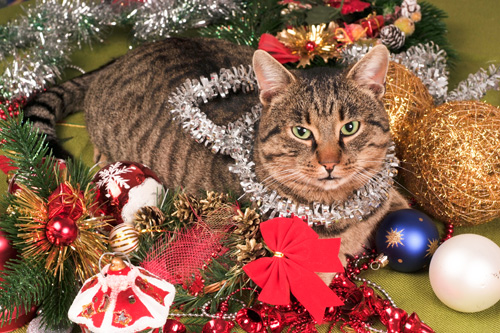