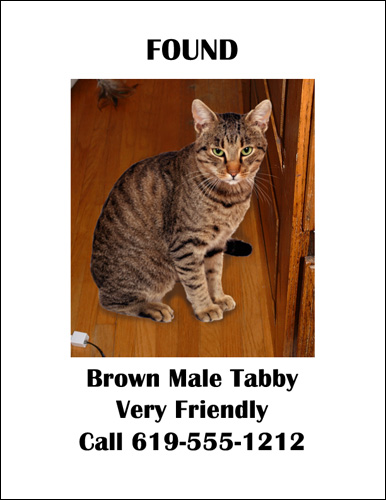 It was a gray morning when Bad Kitty woke up. He crawled from under the porch and looked at the sky. There were lots of clouds and he could smell the dampness of coming rain mixed in with the salty breeze from the nearby ocean. He looked back at his old house and made a decision.

“If they don’t want me, I don’t want them either.” And Bad Kitty trotted down the street.

Bad Kitty did not know where he was going, but he had a long ago memory of when he was a kitten. He had lived outside before when he was very young and he knew he could find food in the big plastic bins that sat outside people’s houses. He could smell that many of the bins had food in them and he was lucky enough to find a one that was open. He found some bird that tasted like what he had stolen the night before, only it was dry and stale. He ate his fill and kept trotting down the street as raindrops started to fall.

Soon the rain began to pour down and Bad Kitty had to find shelter under a bush. He could no longer remember where his old house was. Even though he did not want to go home, he did not want to be stuck outside either. Several wet days passed and he took shelter wherever he could — under cars, in dry corners of buildings and once even in an old doghouse that only had the faintest smell of dog.

Finally, the sun came out and Bad Kitty wandered past a large asphalt lot with a chain link fence around it. It was afternoon and children were coming out of a gate onto the sidewalk, laughing and playing. Bad Kitty thought maybe he should run and hide, but then he saw a boy with brown hair and a girl who looked a little like him, only smaller. They seemed friendly, so he walked up to them and meowed hello.

“A kitty!” the girl said in a shrill voice.

He held out his hand for Bad Kitty to smell. Bad Kitty sniffed his hand for a moment and then rubbed up against it. He could tell that the boy was kind.

“You said you wanted a kitty for Christmas!” said the girl, just a little less loudly. “Are we going to keep him?”

A white car drove up and stopped by the children. The woman inside opened the door. She had yellow hair, but blue eyes just like the boy’s. Bad Kitty guessed it was the Mom.

“What have you got there, Ryan?” she asked.

The girl answered for him. “It’s a kitty! Can we keep him?”

“She asked me, Emma!” said Ryan, and then added, “He is very friendly.”

The Mom looked at Bad Kitty, and then at Ryan.

“If he’s friendly, maybe he belongs to somebody,” she said. “He could be lost. We can take him home and make flyers to see if someone is missing him.”

“Shhh,” said Ryan as he picked up Bad Kitty. For the first time in a long time, perhaps ever, Bad Kitty felt wanted.

That night, the Mom and Ryan worked together to make a flyer with Bad Kitty’s photo on it. They made a lot of copies and the next day, they posted them for several blocks around the school.

But then something happened that upset Emma. She and the Mom were in the kitchen and the Mom was helping her make a sandwich. Emma was holding a slice of turkey and Bad Kitty couldn’t help himself. He jumped up on the counter and took it right out of her hand!

“What a bad kitty!” said Emma as Bad Kitty ran away with the turkey.

“He’s not a bad kitty,” said the Mom. “He just doesn’t know any better. Maybe we can show him that if he waits and does not try to take the turkey, he will get some of his own.”

They tried it and after a couple of days, something amazing happened — it worked! Bad Kitty learned that when he tried to take food, he was not allowed to have any, but when he waited, he got a treat.

Another day, Bad Kitty needed to stretch his paws, so he began to claw the sofa.

“No, no, no — bad kitty!” said the Dad, who looked like a grown-up version of Ryan. Bad Kitty got scared at his stern voice and ran under the bed.

“Uh-oh,” said the Mom, “I knew we should have gotten him a scratcher. I’ll go to the pet store tomorrow.”

“But we don’t even know if he belongs to somebody,” said the Dad.

“It has been a week and no one has called,” said the Mom. “I am sure he doesn’t belong to anyone.”

But that weekend, the phone did ring.