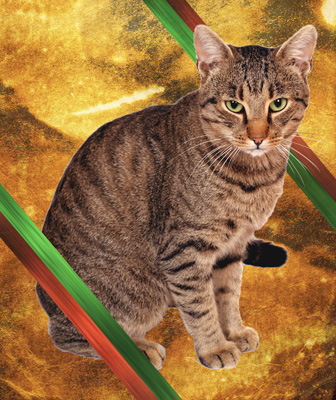 I have a surprise for you today! My human wrote a short story for Christmas. Actually she has only written the first part of it. There are two more parts — Part 2 of the story is here and Part 3 will run on Christmas Eve. She was not expecting to do this. It just sort of happened. It is a story about a misbehaving kitty and it is a children’s story… but anyone who loves cats will enjoy it.

Once upon a time, there was a little cat who was a big troublemaker. He liked jumping on the kitchen counter and stealing whatever was there, whether it was some yummy cheese that was meant for a sandwich or a cherry tomato that would make a fun toy. He also loved climbing the back of the sofa so he could nap on top of it in the afternoon when the sun was nice and bright. He did not care that he was tearing the sofa with his claws.

There was only one problem. His family did not like his antics. They were always telling him, “No, no, don’t do that! Bad Kitty.” After a while the little cat could not remember what his name was anymore. He just thought his name was Bad Kitty.

One day his family was planning something that was a Big Deal. It involved a lot of work in the kitchen. The female human was putting food into dishes and there was a gigantic bird on the counter. Bad Kitty had never seen a bird that was so big, or that smelled so wonderful. So when the female human walked out of the kitchen, just for a moment, Bad Kitty took a chance and jumped on the counter. He attacked the big bird, tearing out mouthfuls of flesh. It was amazing. He had never tasted anything so good!

Then something really awful happened. The female human opened the back door to the outside and threw him out!

She slammed the door shut and it was suddenly quiet. Bad Kitty padded up to the door and scratched at it and meowed but nobody answered. He could still smell the bird inside the kitchen and he could hear people talking, but nobody came to the door.

Bad kitty sat outside the door for a long time. The sun disappeared behind the house and it got dark. The lights came on in the house. Through the window, he could see people arriving and talking and laughing. But nobody seemed to miss him at all. Bad Kitty realized that nobody wanted him around. Or worse yet, maybe nobody even cared about him at all. He went to sleep under the porch, hoping that when he woke up, he would discover it was just a bad dream.