You are here: Home / Kitty Wisdom / Thankful Thursday: A Legacy of Gratitude 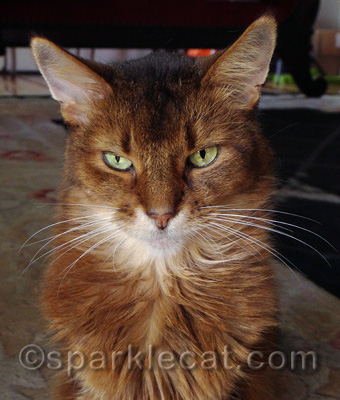 Two very special kitties left us recently: one world-famous and another mainly well known to social media-savvy kitties. Homer, the star of the best-selling book Homer’s Odyssey, had been in ill health for many months and it was finally time for his human, author Gwen Cooper, to say good-bye to him. Jami’s death was sudden and unexpected. You might remember my blog post about him last October, when he was rescued and transported to his new home. He snuck out the door one evening about a week and a half ago and was killed by a car. While I was deeply saddened by these events, I’m not here to mourn these two wonderful cats. Rather, I want to honor their lives by celebrating their legacies instead. 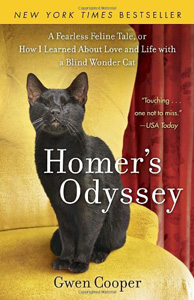 Homer had two strikes against him: he was blind and a black cat. But it did not matter because his personality was so large it filled a book and changed the way people thought about cats with special needs. Homer passionately embraced life and was so loyal to Gwen that he even protected her fiercely when someone broke into their home. The thing about so-called “disabled” cats is that they have no idea there is anything the matter with them, so they don’t put limitations on themselves the same way humans might do. Homer helped the readers of Gwen’s book understand this, and as a result many of them went out and adopted special needs cats themselves. That legacy was never more clear than in the days after Gwen posted about Homer’s death on her blog and on Facebook. In addition to all the condolences, many people posted photos and told stories of the blind and special needs cats they had adopted after reading Homer’s Odyessy. That was beautiful to see.

Gwen’s latest book, Love Saves the Day, is coming out in paperback on October 22, and she will be donating 100% of her royalities from all presales and sales of the paperback through October 27 to a rescue (to be announced) through Homer’s Heroes Fund, which she is establishing in his memory. Buy Love Saves the Day by clicking my Amazon Associate link here, and I pledge to donate 100% of my commission for the book to the same rescue. (I just want to mention that it would make an awesome birthday or holiday gift!) 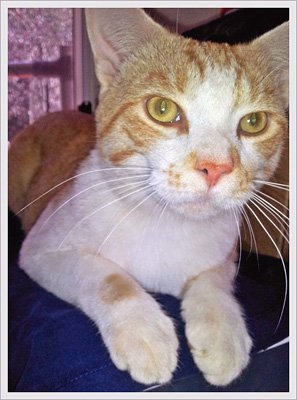 Now Jami. I felt so awful when I heard the news about him, not only because he died, but because his human felt so guilty. The truth is there was nothing she could have done. Jami was an escape artist, and the humans in his household frequently had to go after him and bring him back in. And even if they had known right away that he had gotten out that night, it was dark and it would have been very difficult to find him. There is no blame, and I hope his human has begun to understand that.

But Jami did leave us with a very valuable gift: his rescue back in October energized the feline social media community. He had been dumped at a dog rescue in Greenville, SC, a place where he could not be kept. Word got out all over Twitter and the Cat Blogosphere about his plight and many of us worked hard to get him rescued. Finally Mizz Bassie’s human, all the way down in Hollywood, FL, offered to adopt him, and a transport was arranged. Many of us watched on Twitter and Facebook as each leg of the transport was completed. Everyone who drove Jami fell in love with him! Heck, we all were in love with him, even though we had never met him in person. And his transport was so inspiring that many humans (mine included) signed up to be transport volunteers. Jami’s life ended too soon, but in the short time he was with us, he made a difference. There will be kitties who will get to their new homes, all because of the story of Jami’s transport.

Homer and Jami — thanks for the memories, and thank you even more for the legacy you have left us, and for cats yet to be rescued.