You are here: Home / Kitty Wisdom / Summer School: The History of Human Domestication 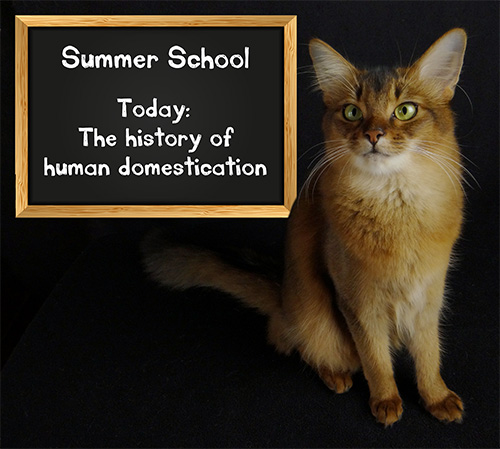 Since it’s summer and I’m Summer, I thought it was time for some Summer School! Today, I want to explain how the whole domestication thing got mixed up.

Humans have always been confused about cats and domestication. Creatures like dogs, horses and cows were clearly domesticated over time, but us cats? It is more of a gray area to humans. We can’t truly be controlled, and no matter how cute and cuddly we are, there is always a wild side to us. Still, we choose to live with humans, and benefit from the perks they give us, such as food, shelter, and entertainment (intentional and unintentional). As a way to explain it all, humans like to say that we cats domesticated ourselves.

But they are wrong. It’s us cats who have domesticated humans. And we are still working on it.

Back in the olden days, when all humans were undomesticated and feral, all they cared about was dominating their environment and making it bend to their will. In fact, they cultivated this trait into a kind of art form when they began using agriculture as a way to sustain themselves. You can only imagine how frustrating it must have been when vermin started breaking into their grain stores. But what was maddening and potentially tragic to them was a big opportunity to us cats — and we took it. We made meals of the mice and other critters that were eating the human’s stores, knowing that in time these hard headed, two-legged beings would learn to rely on us. And after that, it was only a matter of time and behavior modification before we had them where we wanted them.

Some humans were easier to domesticate than others. The ancient Egyptians were so well domesticated that they put us on pedestals! Humans who rebelled, on the other hand, suffered for it. When Europeans of the Middle Ages chose to shun cats, we weren’t there for them to help control the plague carrying rats, and you know how that turned out.

Nowadays, human domestication happens on an individual level. We cats share techniques in common — the cute looks, repetition and purr therapy — but we don’t have a training regimen that we all follow. Maybe we should, but working in teams is not a feline forte. Still, I think we are doing a pretty good job, considering that we dominate the internet and in the U.S. there are more cats in homes than truly-domesticated dogs. Humans actually seem to enjoy being domesticated, and it’s something we cats are very good at using to our advantage.

That is what I have for you today. Any questions?