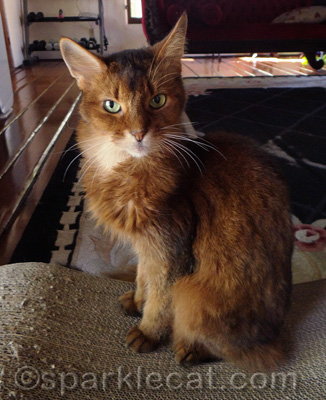 Did you know that scientists did a study on whether humans could understand what a cat was meowing about — and the humans failed miserably? They recorded a dozen cats in five different situations (getting fed, being in a car, etc.), and then asked people to listen and guess what was going on. They had no clue! Humans who lived with cats, or who were cat lovers scored better, but it was still pretty abysmal. But do you know what was really abysmal? The scientific study itself!

It is important for a scientific study to ask the right questions, if the researchers expect to get any meaningful results. And these guys were way off the mark because we cats don’t use our vocalizations as our primary means of communication. In fact, meowing is a last resort, and we only use it because humans seem to respond better to the sounds we make than to our more eloquent body language or facial expressions. When it comes to the nonverbal language we speak, humans are even worse at comprehending than when we meow at them. If scientists want to improve feline-human relations, that is what they should focus on, not meows.

Fortunately, smart humans who spend a lot of time with cats can easily learn feline body language. They know if we are blinking at them, we are being friendly, and that when we rub against them, we are marking territory as much as we are showing affection. And if any human has no idea what airplane ears mean, they probably are pretty bad at reading human facial expressions too. Compared to our nonverbal queues, meows are a clumsy and ineffective way of getting our point across. We only meow because you humans are always talking — so we are trying to lower ourselves to your level.

I bet if scientists did a study on whether we cats understood what humans meant, judging by their vocalizations, we’d score lot better that the humans who couldn’t understand us cats. What do you think, kitties? Am I right?