You are here: Home / Kitty Wisdom / Striking Back for Lux the Cat 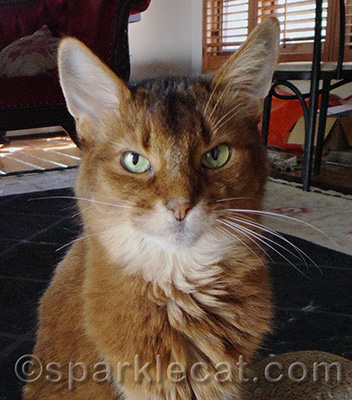 I have something serious to discuss with you today. But first I want to pose a hypothetical situation to you humans:

What would you do if something that was close to your size hurt you — some creature that was kind of scary and unpredictable? Would you automatically try to defend yourself, or at least do something that might warn them off? And then what would you do if some other giant creature, much bigger and more powerful than you, came along and kicked you really hard? There is no easy escape, so wouldn’t you try to fight your way out?

Well, that is exactly the situation that happened to a cat the other day. You have probably heard about it on the news or online: a cat named Lux struck out at a 7-month-old baby when it pulled his tail. When Lux scratched the little boy, the kid’s father kicked him. Lux went ballistic, ultimately forcing the family, and their Pomeranian dog, to hide in the bathroom and call 911 to subdue the cat.

There are so many things wrong with this scenario, it is hard to know where to begin. So I think I will start with the biggest guilty party: the media that has been making light of this serious situation. It even got covered on entertainment website EOnline and the video clip from channel KPTV calls the situation “both scary and funny.”

Believe me, there was nothing humorous about this situation. These parents have failed both their infant and Lux. Here are my thoughts, from a feline perspective.

1. How much do you want to bet that this cat has been abused before? Because yes, physically striking a cat is abuse, and I am sure this cat had been hit in the past before this incident where he was kicked. The thing about us cats is that we don’t understand punishment, and physical punishment especially is perceived as a threat. Some cats will cower and hide from this kind of threat — and others will fight back. Either way, it does not create a bond with the abusing human. It teaches the cat that humans are scary creatures that might harm them.

2. Why wasn’t the baby being closely supervised with the cat? A 7-month-old child should never be allowed to touch a cat without a parent either holding the cat, or hovering and watching both the cat and child closely. The baby should never have been allowed to pull Lux’s tail. Yes, infants and toddlers have grabby hands — which is exactly why very close supervision is essential. Even a friendly cat doesn’t understand that giving a warning whap does more damage to little human skin than it does to another cat that is getting too rough.

3. The father said that Lux has been aggressive in the past. Okay, well then why were these parents letting him anywhere near their baby? That was just plain stupid.

4. And in addition, how come they weren’t trying to figure out the source of Lux’s aggression from the start? It was a clear signal right then and there to take Lux to the vet to find out why he was behaving this way. Cats act aggressive for any number of reasons. They could have something wrong with them physically. Pain can cause many animals (not just kitties) to become aggressive. Or could Lux have a brain tumor? If his aggression is behavioral, that should have been looked into also. Cats aren’t aggressive for no reason, and there are many ways to lessen that behavior.

5. Lastly, the reporters and parents kept calling Lux a “Himalayan.” He is not a Himalayan. He is a big, fluffy black and white cat. Himalayans have color points like a Siamese, but with long hair. What, did these people get Lux from a lying backyard breeder or something? Calling him a Himalayan makes them look even more ignorant than they already do.

My biggest hope for Lux is that someone steps up and takes him away from these parents. They are not good pet owners, and they aren’t great parents either. They did not protect their baby from an aggressive cat and set a bad example by physically abusing it — punishing the cat for neglect they caused. Unfortunately, the kid is stuck with his family. Maybe Lux at least can get a new home.