You are here: Home / Kitty Wisdom / Interview with Sparta 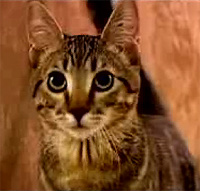 Sparta is your average, everyday kitten. He loves to make surprise attacks on his humans, use their hands as teething devices, and enjoys hiding in secret spots that drive them wild. Oh, and Sparta also is a huge YouTube sensation. He’s the star of the music video for “The Mean Kitty Song.” shot by his human, Cory Williams, also known as Mr. Safety, owner of SMP Films and the host of The Fizz, a unique TV show made by video bloggers. While Williams’ career seemed to be moving along just fine (both YouTube and MySpace employ him), it was only when Sparta’s video hit YouTube that it went into overdrive: within a week, “The Mean Kitty Song” had over 1.7 million views! Clearly, while Williams is no slouch in the talent department, Sparta’s charisma is even greater.

Even though he is still very young — not even four months old — Sparta already understands the wisdom of using his human’s talents to bring on fame and fortune. And of course, being a kitten, he doesn’t really care much about money and status symbols. For Sparta, it’s all about salmon steaks and having fun. In this exclusive interview, Sparta discusses his humble beginnings, the making of the video, and reveals a depth rare in a kitty his age, as he ponders the meaning behind his overnight success.

Sparkle: A little background, please. How old are you and where did you come from?
Sparta: I was born in Los Banos, California to a family with a little girl. The family didn’t have room for me in their home, so the little girl went knocking door to door to find me a new family. After knocking on every door on the block, the little girl had only one more door left. Steve Karp answered the door and saw the little girl crying and Steve knew that the girl had done all she could to rescue me from the animal shelter. So Steve took me into his home and loved me and the little girl was happy again. I stayed with Steve and Bernie (his wife) for about a week, then one day they had friends over. Their names were Stephanie and Cory. Instantly, I was playing with Cory. After an hour of play, I felt tired and decided to sleep on Cory’s lap. The next thing I knew, I woke up in a new home. Cory had brought me to his home in Turlock, California. I knew everything was OK, because Steve and Bernie were moving to a new home that wouldn’t allow me. My humans were fun and kept me out of trouble. Their home at the time was very small so there wasn’t much room to play, but that changed about 2 weeks after I moved in. We made one more BIG move to Thousand Oaks, California and this home was huge! Finally I was able to run and play all I wanted, but I learned that there were still places I could not play. Now I am about 13 weeks old and life is good.

Sparkle: Only 13 weeks? You are quite the prodigy! What is your favorite way to attack your human?
Sparta: I love wrestling! I always try to put my human in submission with my mighty jaws. They call me Sparta, after an ancient village of warriors (as seen in the movie 300). Cory and I play every day, but I don’t always bite. Sometimes playing involves hide and seek. My favorite places to hide are behind the guest’s bathroom toilet, under my human’s bed, and inside Cory’s costume closet (which I’m learning, isn’t the best place). 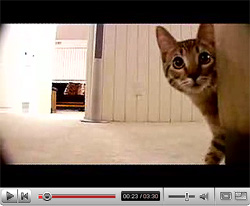 Sparkle: I think a costume closet sounds like a great place to hide — all the better to leave cat fur! Are there any other toys, aside from your human’s appendages, that you especially favor?
Sparta: My favorite toy in the whole world is a fuzzy pink squeeky bone. I’ve heard that the bone used to belong to Sasha, a dog that my humans had once. They rescued Sasha from an animal rescue, but Sasha had an extreme case of separation anxiety. After a year of having her, they gave her to an elderly couple who would be home more often to spend time with her (my humans fly a lot). After moving to Thousand Oaks, my humans gave me many more toys to play with. In fact, I can’t seem to figure out which one is my favorite anymore! They even got me a great big climbing tower so I could exercise and sleep on it. They say I’m spoiled, even though I won’t admit it.

Sparkle: Ha, it’s impossible to spoil a cat. Do you have any good tricks you’d like to share for ambushing humans?
Sparta: My humans have a laser pen and I love chasing the laser! My humans spend about 30 minutes each day playing with me using the laser. It’s a great work out and it’s really fun too! I just wish I could catch it one day. 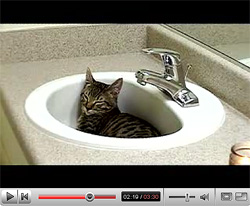 Sparkle: Okay, so I see you want to keep your ambush tricks to yourself. Be that way. But do tell me — why, in your opinion, does the sink make a better sleeping area than a cat bed?
Sparta: Well, I have a new bed now… it’s on my climbing tower. Before I had the climbing tower, the sink was the most comfortable thing in the house! It just seems to fit my body perfectly and they never use that sink anyway. From time to time, I like to wake up and play with the kitty in the mirror, but I still don’t understand why the kitty never plays with me in other parts of the house. As for the cat bed that I have, maybe I don’t use it because I’ve never tried to sleep in it yet. My humans keep showing me the bed, but I’m always too busy playing to realize what it’s for.

Sparkle: I’m sure the climbing tower is a better place to sleep anyhow. Now, tell me, if your human got you a running water fountain instead of just putting still water in a bowl, would you stop drinking out of the toilet? Or would the water fountain just be yet another expensive trinket for you to shun?
Sparta: I actually drink out of my water bowl, more than the toilet, but I just find it more fun to drink from the toilet because the water is harder to get to. I play with the water in the toilet more than I actually drink it. Lately, my humans have been keeping the toilet lids in the house closed because they don’t want me to slip and fall in. I guess that’s one reason why they call Cory, “Mr. Safety.”

Sparkle: Mr Safety, huh? Humans can be such spoilsports with their safety concerns. Tell us about shooting the video — was it fun? Annoying? Tiresome?
Sparta: The video shoot was fun! My human always plays with me, but this time he had a camera in his hand while he did it. The filming took about 2 days and it seemed like the camera never left his hands the whole time! He just wanted to make sure the shots looked great. Over the past week, I’ve been getting very used to cameras because we have had many strangers come inside with really big cameras to take pictures of me. Just the other day, I saw myself in a paper! I wonder how long it will be until I score my first feature film? My human is going to be in his first feature film in October, so maybe I’ll be able to play as an extra on the set!

Sparkle: If the director was smart, he would star you and maybe just let your human support you. But back to your video. Did you get any special treats for starring in it?
Sparta: I have had 2 steaks of smoked salmon to myself, ever since the first video was filmed! My human says he’s going to bring me more treats, but he wants to make sure to bring me the best stuff. He thinks real food is better than processed food.

Sparkle: Are you getting more fan mail than you human?
Sparta: YES! My human has been spending day in and day out reading it to me. It’s flattering, but I kinda feel sorry for him. LOL.

Sparkle: POL! [ed. note for humans: that’s catspeak for “Purring Out Loud.”] I hear you have a new video! Can you share some details about it?
Sparta: My new video shares my history with those who have seen my music video. It seems that my life has impacted many other lives around the world in a positive way. All because of that little girl from Los Banos, who had a kind enough heart to save my life. Everything we do in life creates a ripple effect that impacts other lives and the ripple that girl made that day she rescued me, moved the lives of millions. Believe it or not, this ripple was just a small ripple compared to the ones that every day people make on a regular basis. THIS ripple was just a visible one. Rare and unique, but not any more important than the ones that impact your life every day. In fact, this message is composed of millions of ripples caused by people from around the world, just as many ripples as it took for you to read this. 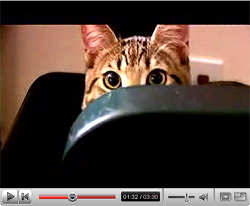 This just in! Sparta is starring in his own video series! See http://www.youtube.com/smpfilms to find out more!