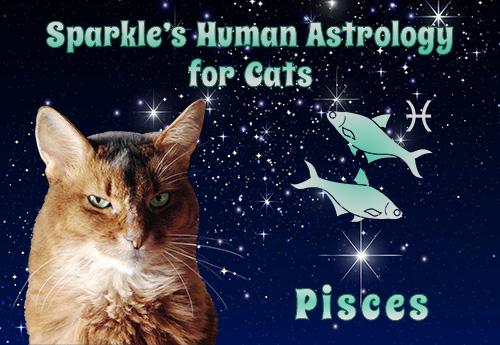 With their sympathetic, intuitive natures, you might be tempted to manipulate your Pisces human to bend to your every will. I bet you won’t, though. As a cat, you can sense what sensitive, sweet natures they have, no matter what they display on the surface, and that will make you stop before taking advantage of them (or at least taking too much advantage). The funny thing is, when it comes to kitties, that is Pisces’ strength. That is how they get you on their side.

See, the thing about Pisces humans is that far too many mean people consider them pushovers and walk all over them. And barring other, stronger planetary influences, Pisces would rather let that happen than make waves or cause unpleasant scenes. So they come home to you and you can feel that negative energy dragging them down. Doesn’t it immediately make you want to help them feel better? So even if they come home late or don’t have the energy to play with you, you are just as happy to curl up with them and give them your healing purrs. It’s a good thing that so many Pisces humans are cat people — they need us more than your average sun sign.

Cats really like the fact that Pisces humans will never try to be the boss of them. In fact, most Pisces people don’t want to be the boss of anybody. They’d rather have someone else take over that responsibility. So they are perfectly happy if you let them know when it’s your dinnertime, or that the litter box needs changing. And you may have to remind them sometimes because they spend a lot of time living inside their imagination, dreaming up art or music or writing… or just dreaming. The only time the Pisces lack of leadership becomes problematic is when they latch onto a take-charge partner who has needs they think should come before yours. Those are the seeds for a very unhappy household, and Pisces will be torn between the two of you. Keep your paws crossed that any long term hookups your Pisces human may have will also be cat lovers.

Because Pisces is a very emotional sign, these humans sometimes feel the need to escape from the rest of the world. That is when they need you most. Hang close to them, purr lots, and do things to make them laugh. Pisces love laughter. Since Pisces rules the feet, some of them may enjoy it if you curl up and nap on their feet, especially on cold nights.

One of the best things about the Pisces/ cat relationship is that it almost doesn’t matter what sign you are. Pisces personality traits that might bother humans of other sun signs generally don’t apply to kitties. Take Gemini, for example: humans born under this cerebral sign might consider Pisces people a tad irrational. A Gemini kitty does not care about that, and your Pisces human will probably be fascinated by watching you do things like figuring out how to open up cabinets and turn on faucets. And while let’s-get-to-the-point Sagittarius humans may bristle at Pisces’ evasiveness and slower rhythm, a Sagittarius kitty won’t care. A Sagittarius kitty will just enjoy clowning around for his Pisces human. Pisces humans will also be amused by the Aquarius cat’s quirky nature, but you may have to remember that Pisces needs more physical attention than you cool kitties are used to giving. Virgo kitties, however, might have a few issues — you guys are veritable time clocks, and Pisces people are kind of lazy about schedules. But isn’t that a small price to pay when you have such a nice, soft-spoken companion? Capricorn cats may also find Pisces to be less orderly than they would like, but your Pisces human understands you on a level you won’t get from anyone else, so you are likely to forgive. Leo kitties, you may be just a little frustrated with a Pisces human because while they have no desire to lead, they are generally not terribly worshipful either. Pisces will appreciate you quietly, but you won’t get quite the fanfare you long for. The sometimes-bossy Aries cat, on the other hand, may find it easy to temper his or her aggressive nature because it will be obvious that Pisces puts a high value on your relationship. Taurus kitties find Pisces humans comfortable companions and won’t mind their flights of fancy (except when it makes dinner late). Same with Cancer cats — you guys are a little needy! But Pisces humans usually take very good care of their animal companions and you will always feel loved. Libra kitties find Pisces humans to be pleasant, peaceful companions, while Scorpios will find a unparalleled depth and loyalty with Pisces that is only rivaled by a relationship with a Scorpio human. Notice how Pisces seems like a different human with each sun sign kitty? That’s part of their magic.

Are you a Pisces kitty? Your relationship with your Pisces human will have an almost dreamlike quality. Other humans and cats may not get what is going on between you two because it is happening on such a profoundly psychic level. But who cares what they think? Not you two.

Pisces is ruled by the planet Neptune and is symbolized by a pair of fish swimming in opposite directions. No, this does not guarantee you will get tuna coming and going — it means that there is a certain duality that goes on inside every Pisces: will you get the empathetic human who seems to be able to read your mind? Or will you get the escapist who buries themselves in alcohol or fantasies or denial? As your Pisces human’s feline, it is up to you to help keep this sun sign on the right track. And they will love you for it.

This is part of Sparkle’s Human Astrology for Cats series — see the other entries here.