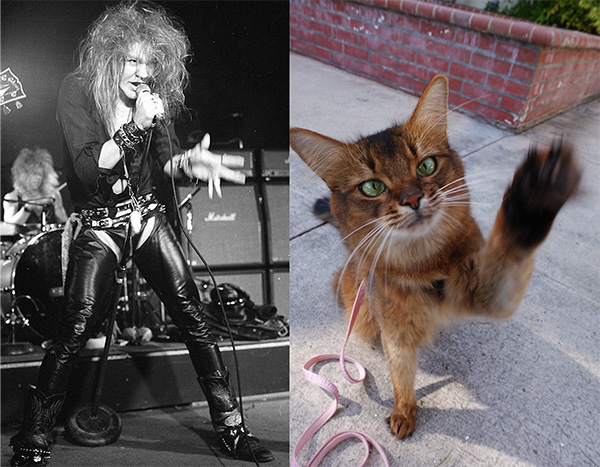 Many of you know that my human started off as a rock journalist in the 1980s and 1990s. Most of you don’t know she began as a rock photographer, even before she was a writer. She had photos published in national magazines and local weeklies alike, and most of the pictures were from live shows. Little did she know that many years later, that experience would help her photograph cats! And I’m sharing some tips that can help you photograph your own cats (or dogs… or rock stars, for that matter).

1. You don’t need fancy equipment. You just need to know the capabilities of the equipment you have on hand. 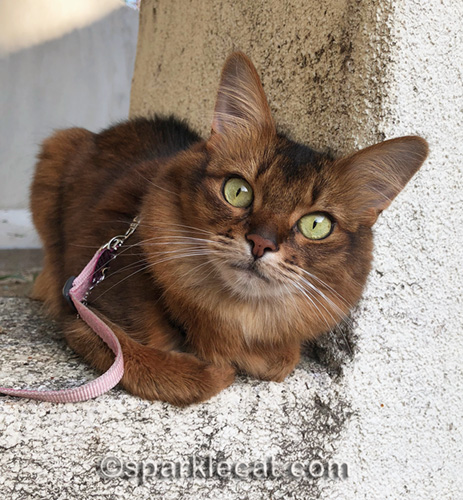 My human had two cameras, and both of them were hand-me-downs from her dad. They weren’t fancy-name cameras, but they did the job. They did the job because my human knew what to do with them. Nowadays, she uses a high-end point-and-shoot camera — not even a DSLR. But honestly, to take awesome photos of me for the blog and for my Instagram account, she doesn’t even need the point-and-shoot. She often uses her iPhone. The thing is, she knows all the things the iPhone can do (for example, you can hold your finger on the phone to set focus, and a slider will appear to change the exposure). Phone cameras these days have a lot of different functions, and you should learn them because they will make your photos — and the process of taking photos — more interesting.

Back when my human was photographing rock bands, there were two schools of photography. One used flash; the photos did get published by one rock magazine in particular, but they were not very attractive and did nothing to evoke a mood. The other school, which my human belonged to, exposed for the stage lighting only, and the resulting photos were exciting, and the mood of the show really came across. 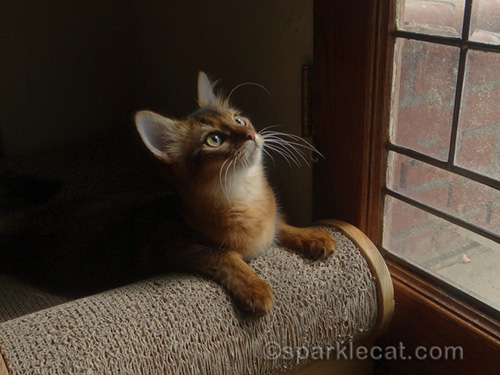 It’s the same for your pets: ambient light is the most flattering. Try to catch your four-legged family member near a window with filtered light coming in, and expose so that you get details in the face. Or out of doors, out of direct sunlight. Always make sure the part of the subject you’re focusing on has the best light. Avoid flash whenever possible. 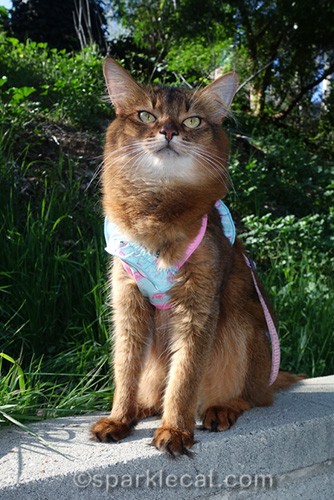 What’s the exception for the no-flash rule? My human used it in rock photography sometimes, and she also sometimes uses it with us: use the flash to fill in shadows when the contrast is too strong. In that case, you use both the ambient light and the flash. Take the flash off auto and just turn it on so it always goes off. Play around with it for a few photos when you have bright, contrasty light. Sometimes when the light is low, and your cat or dog is too busy, you’ll also have to use flash. Experiment — unlike the old days of the 1980s, you don’t have to buy film in rolls and risk wasting your money! 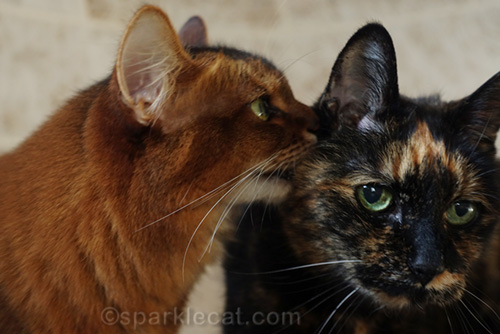 My human created what she called “concert portraiture.” She framed the musicians tightly in her viewfinder, often waist up or closer, and focused on their facial expressions when she took the photo. Unless you are photographing a scardey cat, get as close as you can to your pet. Fill the camera frame with them. Unless something in the background is meaningful, or you are setting a location, you shouldn’t take a photo from far away. If for some reason you have to take a photo from a distance, then crop it before posting it. 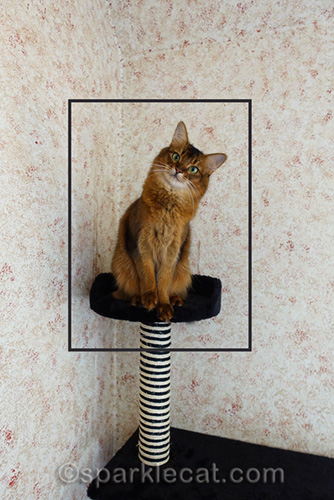 There are all sorts of composition rules, like the Golden Spiral and the Rule of Thirds, that artists and photographers know. The important thing to remember is that empty space should have meaning and that the eyes should usually be the focus of the photo (unless you’re taking a photo of another body part, of course). If you spend some time looking at great photos other people have taken, you can see composition in action. The most beautiful scenery or prettiest face can be made dull by bad composition, and pop with good composition.

Another tip: make sure the surrounding area is uncluttered. If your pet has favorite places to hang out, make sure those areas are clear of stuff. Even when you are tight on your subject, a pile of dirty laundry, an open bag of dog food, or just general messiness is distracting in the finished photo.

4. Fall in Love With Your Subject

No, my human was not a groupie! But most of the time she loved the music by the bands she was photographing. She would let the music move her as she took the photos. Being in the flow of the songs really helped her take some nice shots. 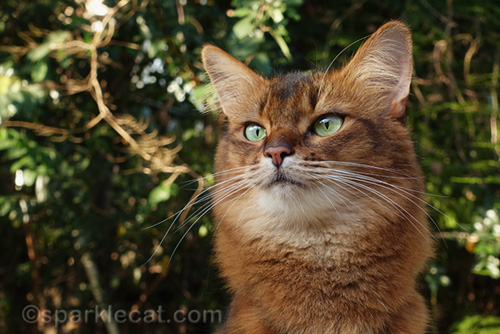 This one should be easy for people photographing their pets because you already love your subject! So go with their rhythm and flow. Lock in with your pet’s groove, whether it’s wild and crazy, or calm and serene. You’re capturing a mood, along with taking a pretty photo.

1. You can use the outtakes! 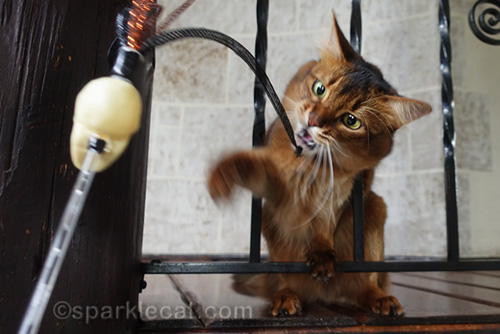 If a professional photographer takes a bad photo of a rock star, you can bet the rock star doesn’t want it published! In fact, they may even ban you from shooting them again if they are really upset. But with your pets, sometimes the photos that are the most fun are the mistakes, the outtakes of your pet making a silly face, or when something goes wrong. And best of all, your pet doesn’t care and won’t ban you from shooting them again. I regularly have outtake posts on my blog, and they are some of my most popular posts.

2. Treats and toys help pets pose — not so much with rock stars. 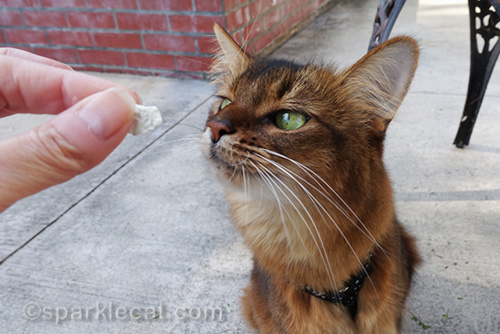 When we are doing a photo session, my human can get my attention with a toy or one of my favorite treats. She always has a few of both on hand before she starts taking photos. You can’t do that with rock stars — wave a bottle of whiskey at them, and that will distract them instead of making them pose better.

3. You can train your pet to stay — you can’t train a rock star. 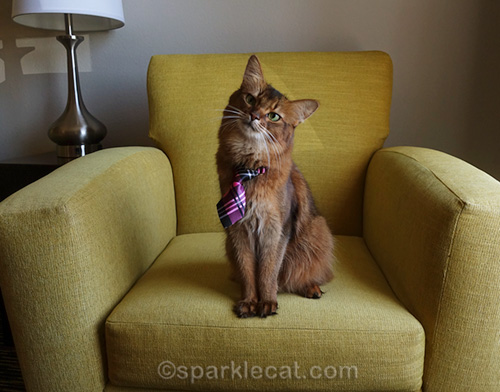 My human learned when she was doing studio work that some rock stars were fidgety and restless and getting them to stay still for a session was difficult. This may be true of your pet too — but chances are you can train your pet to stay. I learned how to stay for treats. She taught me how to sit by holding the treat over my head until I backed up and sat down. Then she would make me stay for a beat before giving me the treat. That beat became a few beats, and then long enough to get a photo of me posing nicely (sometimes with a product). People are always impressed with my ability to follow orders, but honestly, with a little patience (and maybe some treats, or toys), most cats can be trained to do a few simple commands. If your cat understands she is going to get paid for good behavior, she will cooperate.

I hope these suggestions are helpful! You don’t need to be a techie or have special equipment to take good pet photos. You just need a good eye, a warm connection with your pet, and the willingness to practice and experiment. And we are more fun to photograph than rock stars because we don’t demand photo approval!