You are here: Home / Kitty Wisdom / Out of Sight, Out of Scent

At one of the cat shows I was in, my human saw this guy who was selling a kind of litter he swore was amazing! It was made of specially formulated silica gel granules that absorb odor and last for a really long time. He offered to give my human a bag of it for me to review. Because Binga and Boodie have used silica gel litter in the past, she agreed. She figured if I didn’t use it, maybe at least they would. 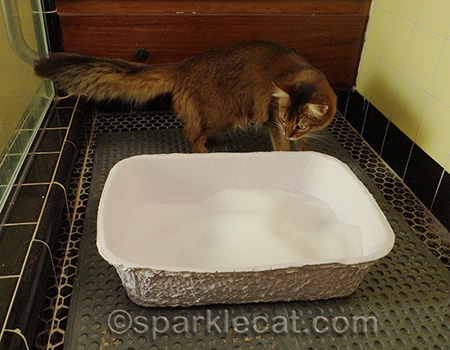 The first thing we all (my human, Binga and I) noticed about Almost Invisible Cat Litter is that it has virtually no scent. That is a huge relief because the only thing more disgusting than a smelly, dirty litter box is a fresh litter box containing some kind of disgusting faux floral scent. The texture is very sand-like — the granules are very small and they make a really satisfying crunch when you dig around in them. I will be honest — both Binga and I were anxious to give it a try right away! 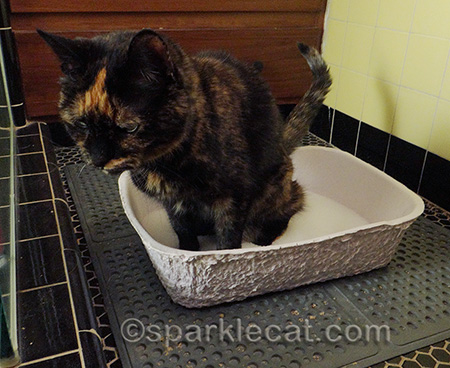 Practically the moment my human took a step back from the box, Binga was in there! 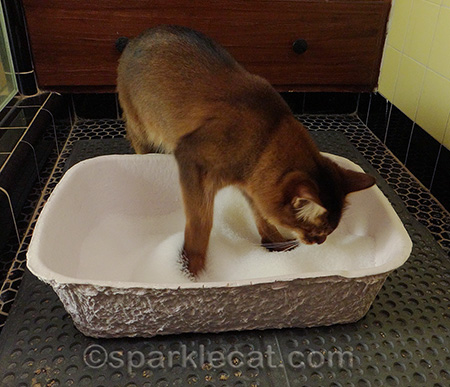 I was thoroughly disgusted that she got in there before me. But the thing about Almost Invisible Cat Litter is that it absorbs cat urine in virtually seconds and there is no odor! At least no odor that humans can smell. Anyhow, I was determined — I had to outdo Binga. 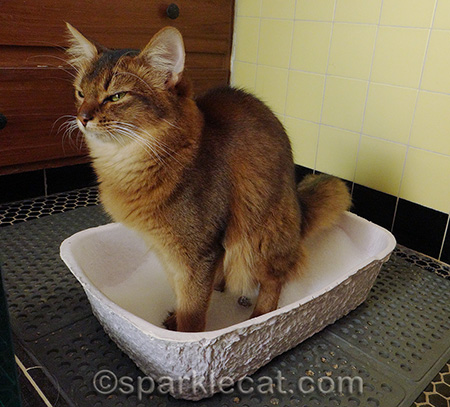 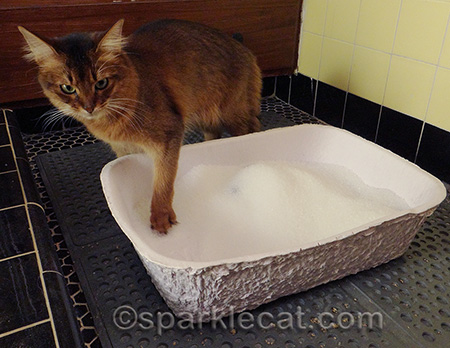 Actually, the scent to that got absorbed pretty quickly too! And the silica gel sucks the moisture right out of it, so it is easy to scoop. In fact, all you have to do is scoop the solid waste and stir around the litter daily and it lasts for up to a month for one cat, or up to 15 days for two! Since my human left two litter boxes in the bathroom — one with our usual litter, and one with the Almost Invisible Cat Litter, it lasted for a good, long while. 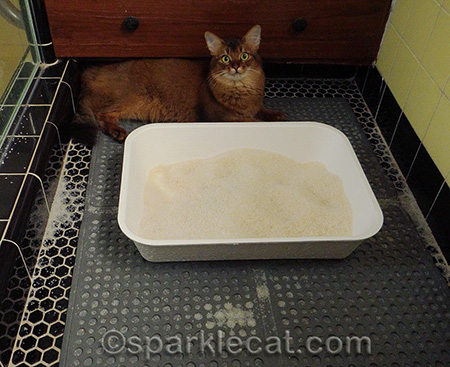 You know it is time to change the litter when most of the granules have turned yellow, which will probably be before you actually start smelling it. When my human could smell a litter box in this bathroom, it was always the other litter box and not this one!

So what was our consensus about Almost Invisible Cat Litter? Binga and I used it regularly, but my human never saw Boodie use it (which does not necessarily mean she didn’t — she tends to do her business when no one is around). We used the other litter box a bit more, but we pretty much traded off between the two. It’s not a total miracle litter — while it is almost totally dust-free, it is not scatter free as you can see in the photo above, especially if you have a litter flinger like Binga… and are like my human and have a bad habit of overfilling the litter pan. Hey, you only need an inch! Even though we used the Almost Invisible Cat Litter box regularly, the big bag we were given lasted months.

We give Almost Invisible Cat Litter a paws up here! 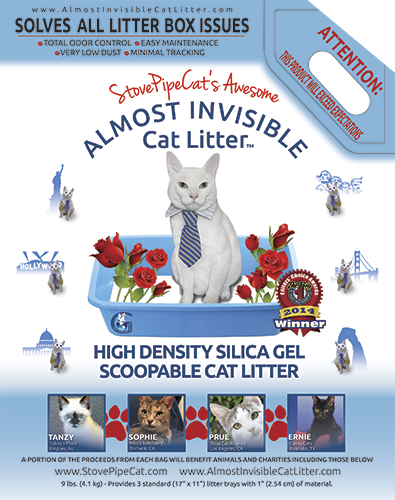 This is the new 9-lb. bag with a handle to make the litter easy to pour.

Disclosure: we were given a bag of this litter to try out, but all opinions are our own.