You are here: Home / Kitty Wisdom / Myths About Humans – DEBUNKED! 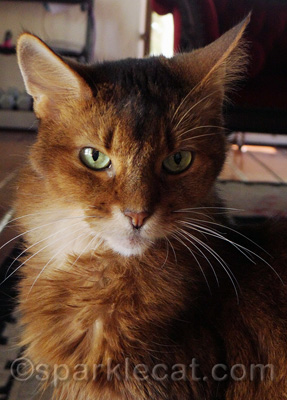 When we kitties talk amongst ourselves, we are bound to spread some untruths about humans. All too often we rely on rumors, conjecture and old cats’ tails when trading information on how to deal with humans and what they can and can’t do. Since I’m the internet’s foremost feline advice columnist (at least according to the cover of my second book), who better to debunk these human myths than me? So I’ve put together some of the most common human myths and given you the real scoop (and I don’t mean litter scoop)!

Humans were put on earth solely for the purpose of serving cats
Myth? Maybe

The truth is, nobody really knows why humans are here. Some say they evolved from lesser creatures, and if true it means they still have a ways to go before reaching the heights of feline status. Others say humans originally came from outer space… but I’ve heard the same thing said about us kitties. In any case, humans seem to do a lot of other things besides catering to our every whim, most of it either useless activity (playing with computers and reams of paper in sterile cubicles) or downright destructive (cutting down the rainforest, hurting other people and animals, etc.). Of course, nothing else they do, good or bad, is quite as important as serving us — that part is truth.

Humans use vocalizations to communicate
Myth? Sort of

Humans do use vocalizations. A lot. But often it seems to be a miscommunication tool, since they so often argue about things amongst themselves. If you look at the bigger picture, the vocalizations humans use tend to cause misunderstandings and bad feelings more often than not, so I lean towards this myth being mostly false. It is a good thing that when we cats communicate amongst ourselves, it is with a minimum of vocalization. We are more direct and to the point, and we don’t try to trick the other kitty with “words.”

Sometimes humans don’t even know what they are going to do next, so thinking they can foretell events seems kind of silly. We kitties are better at judging weather changes and the coming of natural disasters than they are. If you see humans bringing in supplies for a storm, trust yourself, not them. On the other hand, when you see them picking up the ring with their keys on it, it does usually mean they are headed out somewhere. Same with the dreaded suitcase. And if they are putting a lot of things in boxes — watch out! Everybody is probably leaving the house, for good. So it really depends on the event being foretold.

There are actually a lot of myths regarding humans and litter box scooping. This is just one of them. There is another, more alarming myth in which humans use these scoopings to cast spells on us kitties! Fortunately, these are all untrue. It’s quite simple, really. Humans scoop the litter box in hopes that we will keep using it and not use other parts of the house to “do our business.” They also have an aversion to the way used litter smells and they are just trying to get rid of the scent. It’s nothing personal and certainly nothing nefarious. This myth is just a case of kitties letting their imaginations run wild. Most humans realize it is impossible to have any sort of dominance over a cat. And humans who don’t know that are just plain dumb and have probably never lived with a cat or scooped a litter box.