You are here: Home / Kitty Wisdom / Molly to the Rescue, Part 2 – and About Red Boy 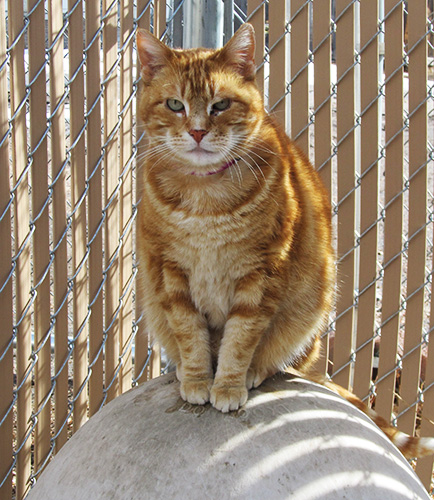 Here is the second part of my story “Molly to the Rescue” (Part 1 is here). At the end I’ll tell you about the big guy above who is standing in for the character of Red Boy!

Molly to the Rescue, continued

It wasn’t the two dozen cats swarming around the woman that made Molly pause, or the big bag of food she held.

It was the woman herself — Molly knew her! She was a friend of her person’s. A nice, older woman named Linnea.

Cautiously, Molly crept towards Linnea, keeping low. It was not Linnea she was afraid of, but the cats.

Linnea turned towards Molly but her welcoming smile turned to shock. “Molly!” she said. “What are you doing here!”

Molly sat up, but as soon as she did, a couple of the cats ran at her. They paused nearby, ears back, hissing.

Red Boy charged at the cats and blocked them, but Molly didn’t see. She had already run back through the fence.

Back under the bush, Molly watched Linnea feed the cats. Every so often, Linnea looked up, searching for Molly.

Molly saw Red Boy looking for her too. But she didn’t move. All those strange cats made her feel nervous.

But Molly heard something that neither Linnea nor Red Boy could — the two men she saw earlier were talking.

The men were behind her, nearby but out of sight. Their very presence made the fur stand up on Molly’s spine.

“Yeah,” the other man agreed. “She’ll just think the coyotes or a dog got ’em. There are lots of coyotes around.”

His partner chuckled. “Heck, there are enough dangers out there to make a whole colony of cats disappear.”

“Meanwhile we’ll make a nice profit from the dealer,” the first man said. “A lab will put them to good use.”

Although Molly couldn’t understand everything the men said, she could tell it was very bad for the cats.

Linnea finished feeding the cats and gathered her things. She looked for Molly once more and called out to her.

Molly wanted to answer, but she was still too scared of the other cats. She stayed under the bush.

A few minutes after Linnea’s car drove off, the two men came out of the shadows, holding three wire cat traps.

Quickly, they set the traps down and tossed some fried chicken legs inside. Molly could smell the tempting aroma.

A few cats came over to the traps. The chicken was irresistible. The cat in the lead was Red Boy. Molly gasped.

Before she could do anything, Red Boy dashed into the trap to grab the chicken. The wire door slammed down.

The noise of the trap door scared the other cats away. The two men walked over to the trap, where Red Boy was.

“Well, one is better than none,” said the taller man. “Let’s get out of here.” But as he reached for the trap…

Molly charged at him and jumped on his back, all claws out. Nobody was going to take her friend away!

“Get it off me!” the man screamed as his friend tried to help. Molly held firm. Suddenly she heard her name.

“Molly? Molly!” It was her person, holding a bag of her favorite treats and staring at the men. Molly jumped down.

“Liar!” Molly’s person said. “I’m his daughter and he loves these cats. You will be fired when I tell him.”

The two men ran off and Molly’s human released the latch on Red Boy’s trap. He walked out and shook himself.

Molly ran up to Red Boy and touched noses with him. “Please come home with me,” she meowed.

“Sorry, Molly, but no,” said Red Boy. “I could never be happy indoors. You go home, where you belong.”

“I’m glad to have met you, though,” Red Boy continued. “You saved my life and I’ll always remember you.”

They touched noses and Red Boy walked into the shadows. “Come on, Molly,” said her person. “Dinner is waiting.”

Now about “Red Boy” — his real name is Citrus! He is at a shelter called Rocky Mountain Feline Rescue in Denver, CO… and he has been there since 2008! He is 9 years old and change, and he is a very laid back kind of guy! This gentle kitty is also FIV+, which may explain why he has been at the rescue for so long. Here is Citrus’ adoption page — can you please spread the word about him? He is much loved by the volunteers at Rocky Mountain Feline Rescue, but after 6 years, he really should have his own home!