You are here: Home / Kitty Wisdom / Molly to the Rescue – My Twitter Fiction Story, Part 1

It took three days, 64 Tweets and 1,305 words (not counting hashtags) to tell the story of Molly’s adventure. Since it wound up going on much longer than I had originally thought it would, I’m posting the story here for you non-Twitter users in two parts. Part 2 will run on Wednesday, and that is going to be a very special post! For my fiction, I usually dig up a stock photo or a Creative Commons use photo from Flickr. The two kitties representing Molly and Red Boy are from Flickr, and I’ll have something to say about “Red Boy” that you may want to know! Anyhow, here is Part 1 of my #TwitterFiction story, spaced out as the Tweets were:

Molly to the Rescue 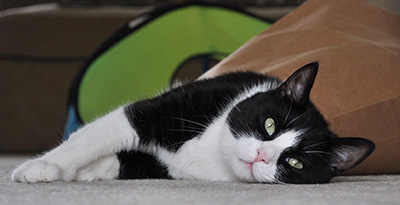 Molly’s whiskers twitched as she watched the birds dance in the tree outside her living room window.

The blue jays and little brown sparrows were enjoying the early spring’s sun rays as much as Molly was.

The birds sang so invitingly that Molly felt like she could reach out and touch them. So she tried.

To Molly’s surprise, the screen that separated her from the outside pushed open — and she fell!

Molly tumbled paws over tail and landed in the dirt a few feet from the tree. She could hear the birds laughing.

She shook off the dirt and glared at the birds hopping on the branches and flapping their wings at her.

With fire in her eye, Molly charged up the tree. It felt good to watch those smug little birds panic and fly off.

But now that Molly was sitting on a branch not far from the window, the problem was how to get back in?

The screen had not come off when Molly fell, but instead banged back into place. Molly was stuck outside.

She climbed down the tree and sat next to the house siding, wondering what to do. Her person wasn’t home.

Her person was gone most days, at something called “the job,” and she would not be home for hours.

Although she knew it would be no help, Molly trotted to the front door, meowing. Of course, there was no answer.

Not knowing what else to do, Molly wandered down the brick walkway and down the sidewalk, looking for help.

A couple of blocks away, Molly saw two men talking on the other side of a rusty, bent-up chain link fence.

Thinking that maybe the men would help her, Molly climbed through a big hole in the fence and meowed at them.

The taller man looked down on Molly with disgust, and to her surprise he shoved her away with his foot.

“Get out of here, you mangy thing!” the man yelled at her. Shocked by the man’s anger, Molly ran off.

She dashed back through the fence and crouched under a scraggly bush. She did not realize she was being watched.

A voice behind her meowed, “Stay away from those men. They are up to no good.” Molly turned to see a ginger cat.

Molly blinked at her new friend — because indeed he was friendly. “Who are you?” she asked, “and who are they?”

“I don’t have a real name,” said the ginger cat, “but the woman who feeds us at night calls me Red Boy.” 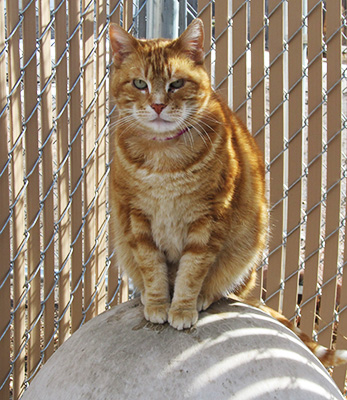 “A nice lady comes around and feeds us,” Red Boy continued. “The owner of this property told her it was okay.”

Red Boy pointed his nose toward the two men who yelled at Molly. “They work for the owner. And they hate cats.”

“They want to get rid of us, but this is our home,” Red Boy warned. “If you want to live over here, be careful.”

“Oh, but I already have a home,” said Molly. “Except, well, I got out and I’ve gotten kind of lost.”

Red Boy licked Molly on the head. “I hope you find your home. But if you are hungry, you can eat with us.”

Exhausted by the day’s events, Molly curled up under the bush and napped. By the time she woke up, it was dusk.

She stood up, stretched high on her toes and wandered back through the chain link fence, hoping she wasn’t late.

What Molly saw on the other side of the fence made her stop in her paw tracks.