You are here: Home / Kitty Wisdom / About a Marine and His Mascot

In 1927, when William H.T. Swisher joined the Marines, he had no idea where his decision was going to take him but he was in for quite an adventure. He served the United States for nearly 18 years and six periods of enlistment. During World War II, he was a combat photographer who participated in actions on Guam and Okinawa, and in the postwar occupation of China. In China, his photographic unit found a new mascot — a young cat who they named Combat. 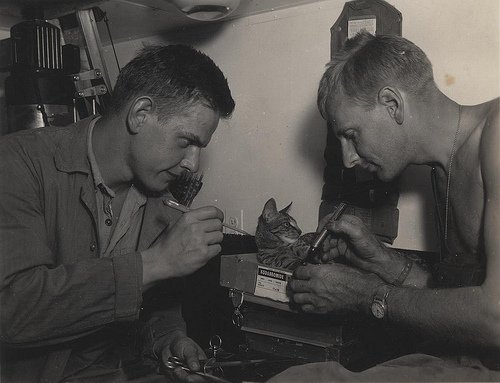 In this photo, Sergeant Swisher is to the right of Combat. Even though the men had serious business in China, they clearly enjoyed getting silly with Combat, and he was much loved in the photographic unit. 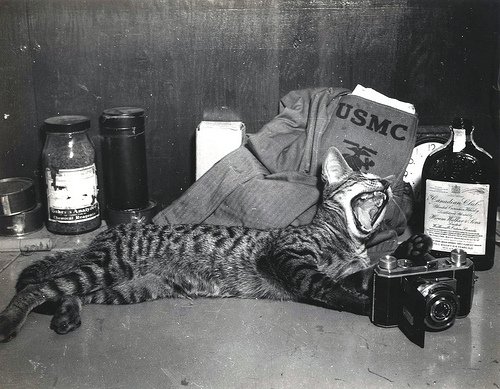 As you can see, Combat knew his way around a camera and he had good taste in liquor. Like many tabby cats, he had cute black paws.

While he was in the Marine Corps, Sgt. Swisher was a still photographer, process cameraman and photo clerk. He also could run and repair a projector. In 1944, he earned a Bronze Star medal in Guam. During all his years of service, he managed to avoid being wounded, so it is both sad and ironic that he was killed in a civilian plane crash in 1946.

This Veterans Day, I honor, Sgt. Swisher, Combat and all the other humans and creatures who served their countries. 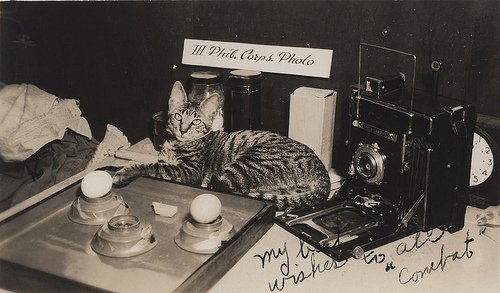 Many, many thanks to the Marine Corps Archives & Special Collections, who have so generously made these photographs available under a Creative Commons license!