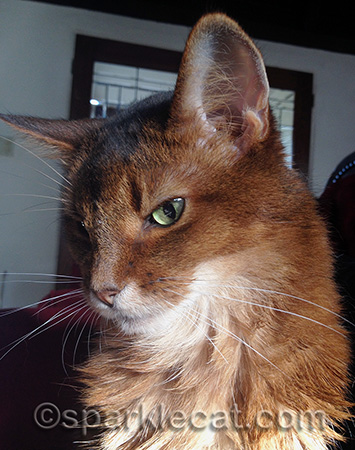 You may remember that the donation from the Cat World Domination Day commenthon went to one of our favorite rescues, PAWS of Connecticut. When my human went to make the donation, she had several choices for where the money should go. She wound up doing one of her favorite things: she sponsored some kitties! She was donating $75, so $25 went to each of three cats.

Many rescues these days have sponsorship programs, where you can either donate a one-time amount to a cat of your choice, or you can make an ongoing monthly donation to help with the cat’s upkeep. Sponsorship is awesome because it’s more personal than just making a generic donation. You get to see the face that is benefitting from your money, and you find out about the cat’s story. I’ve heard of sponsors that actually travel to the rescue to visit their special kitty.

When it comes to human romance, long distance love affairs are usually not a good thing. But with cats, it is a great thing! Especially if you have cats of your own and can’t add to your family, aren’t able to foster, or if for some reason you can’t have a cat at all. Sponsoring one or more cats at a favorite rescue is a way to get your kitty fix — even if you are horribly allergic! You’ll still have a cat that is “yours,” and whose care you have a vested interest in.

Do you want to meet the three PAWS cats my human sponsored? Of course you do! 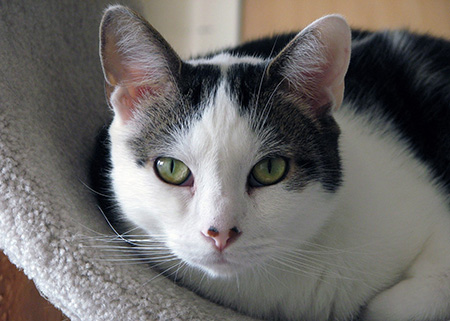 Patch had a sad start to life. He and his mother lived with a couple, but when the wife died, the husband didn’t want them anymore. When the two kitties were being taken to PAWS, Patch didn’t want to go in the carrier, and he was shoved in so violently that he tore all his back claws. He wound up spending a long time healing in the shelter’s medical room. Patch is now six and he has spent several years at PAWS. He is a sweet cat who should live in a quiet home with no children or dogs. What he does need is someone who will love him forever. 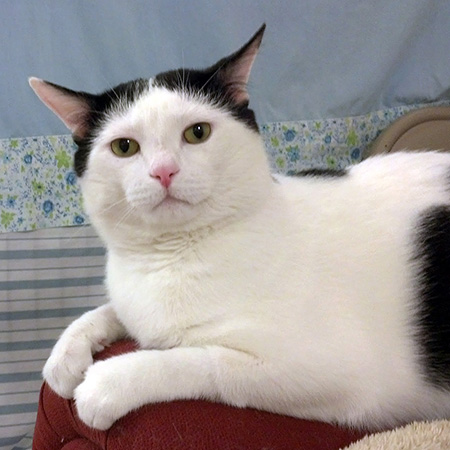 Oreo is a big, awesome guy! He had a human who cared a lot about him, but who became homeless. He is quite a character and loves nip and people. Want to know how much he loves people? Check out the video in this post about him at the Animal Shelter Volunteer Life blog. He is six years old, playful and attention-seeking and would do well in a home with older kids and/ or other cats. 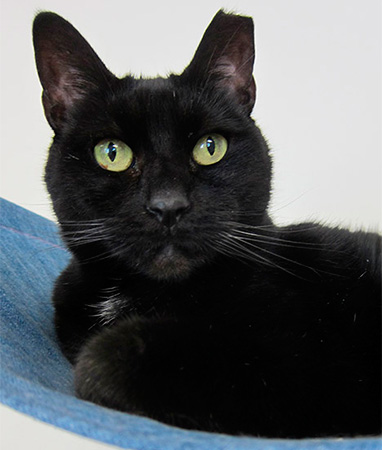 Like so many other black cats, Sweet Pea is affectionate and outgoing and just an all-around cool kitty! This easy-going girl came to PAWS after her human died. She is seven and a half years old, and with her adventurous, adaptable nature, she would do well in just about any home, including one with kids. She loves to climb and survey her surroundings, so make sure you have a nice spot up high for her to hang out!

Isn’t it time you had your own long-distance love affair? Sponsor a kitty today!