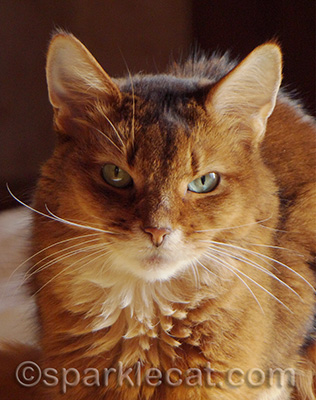 The year has barely started and I already have a stupid human-written cat story to complain about! This one appeared in the Huffington Post a couple of days ago and is called “Sorry, But Your Cat Is Actually A Total Jerk. It’s Just Science.” It proceeds to pull out a handful of biased, misinformed studies and twist around true cat facts in order to poke derisive fun of us kitties! I really hate it when humans do jerky things like this because it makes extra work for cats like me, who have to refute everything.

So here goes — I’m going to address just a few of this article’s many wrongs:

“Your cat hears you, but she won’t do what you tell her to.”
The scientific study the writer draws from leaves out several important facts, not the least of which is that we are paying attention to our human’s calls — we are just not replying vocally. It is not our fault that humans don’t understand the importance of subtle, non-verbal communication. And the part about knocking stuff off a table to get a human’s attention? Blame that on the humans for their inability to comprehend these other types of communication. It’s like the mother having to resort to yelling to get a kid’s attention. Consider that our version of yelling.

“Some cats actually hate the only thing they’re good for: cuddling.”
I find it insulting that some people think we cats are only good for cuddling when we do so many other more important things, like human supervision, guarding the house from vermin, adding beauty to homes, and showing humans that life can be fun and not to take everything so seriously! Some cats have even saved their humans lives by warning them about fires, or brought them help during a diabetic seizure. Yes, some of us cuddle and some of us don’t (and those that don’t still often lie next to or on top of our humans and purr at them), but that is certainly not the only thing we’re good for!

“Just because a cat rubs against you doesn’t mean it likes you.”
Yeah, so? And an act of marking is supposed to make us jerks? Humans have weird expectations.

“Your antisocial cat may not even be the smartest pet in your house.”
Let me quote the first sentence of this paragraph: “Dogs may be more intelligent than cats because they know how to make friends.” Then how do you explain all those socially awkward human geniuses? Social development and intelligence are not one and the same. If it were, the smartest people would all work in the hospitality industry and none of them would be scientists.

“One of your cat’s favorite ways to ‘kiss’ is through a distant gaze you probably don’t even know she’s giving.”
Whoa! This writer took a sincere feline sign of affection and called it jerky? Who’s the jerk here?

“Your love for cats could make you the butt of society’s jokes.”
Even the article’s author admits that this could be society being a jerk. ‘Nuff said.

“If you die alone with your cat, it won’t hesitate to eat you.”
Two words: Donner Party.

“Cats don’t give a damn about sugar and spice and all that’s nice.”
In other words, we don’t have the sugar taste receptors. Frankly, I know some humans who kind of wish they didn’t have that receptor either. And that makes neither them, nor us cats, jerks.

“Your cat makes you clean up toxic poop.”
Here is another bunch of bunk about the Toxoplasma gondii parasite. Let me make this perfectly clear: all humans who dig around in gardens expose themselves to this parasite constantly, cats or no cats. So stop blaming us for this thing already!

“Your cat cleans herself because she thinks you stink.”
If a human was hugged at length by another human — a sweaty one who hadn’t taken a bath in a couple of days — wouldn’t they want to bathe themselves too? Well, that’s what humans smell like to our highly sensitive feline nostrils. Case closed.

So can writers stop being jerks about us cats already?