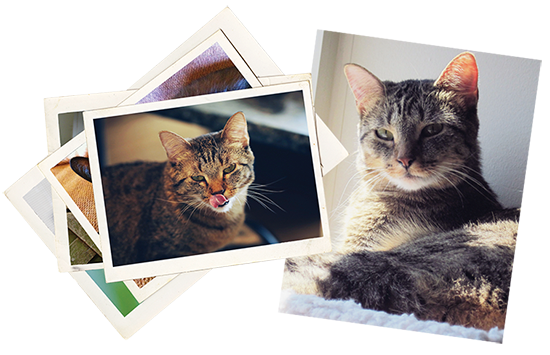 Nearly every month for the next year, I will be featuring one of the feline authors from the Rescued anthology. This month, I am proud to be interviewing Crepes, blogger at Cat In The Fridge, one of the stars of the CATastrophes series, and rescue cat. Crepes is a great storyteller, and her journey from an inbred feral colony to international stardom and glamour is one of the most colorful in the book.

As you know, every author has chosen an animal rescue to benefit from Rescued’s proceeds. Because of the part Tree House Humane played in saving Crepes’ life — and the lives of cats like her — this is the organization she picked, and it will be receiving part of Rescued’s profits throughout the month of February. You can show Tree House Humane some love by buying a copy of Rescued through February 28 — or you can donate directly via their website.

Now let’s sit down with a cup of catnip tea and Crepes.

Crepes: Hi, Summer! Wow, thanks so much for having me! Let me put on my serious hat and get ready for this interview. You may begin.

Q: In the book, your human (MomFOD) was given credit as “The Author Behind the Cat,” but really, how much work did she put into it? You were being generous, allowing her to have that credit, weren’t you?
Crepes: Well, what you say there is a true statement. MomFOD herself is, in fact, an author, and many times she’s behind me, usually yelling something annoying like, “Get off the counter!” or “Get your stump out of my bellybutton!” I never listen, though.

Q: You were already an experienced blogger when your story pitch was accepted for Rescued. Was working on your life story for the book a really different experience from your blog writing?
Crepes: Fascinating question. It was different in that I had to continue my train of thought for more than five hundred words.

Crepes’ Human: If I may cut in for a moment, Crepes has trouble maintaining her train of thought through an entire thought.

Crepes: I will get you while you sleep, MomFOD. I’m so sorry, Summer. She drove me here and I asked her to sit quietly in the corner. Anyway, it was also very cathartic for me, having to relive the nuances of my past. For instance, I had to be candid with my readers about the inbreeding of my family. For many, this would be a touchy subject, but I overcame my hesitation and showed full honesty with my readers. It is what they expect from me and I must deliver.

Q: Tell me about Tree House Humane, your alma mater, and the organization you paw-picked to receive a portion of the proceeds from Rescued. What makes them more awesome than the average rescue?
Crepes: Ah, Tree House! Actually, I’ve never set paw within its walls. And now, apparently, I’m not allowed back in, but whatever. They are doing excellent things for Chicago and its homeless cats. Did you know Tree House was the first no-kill shelter in the city? They have some wonderful programs that I think set them apart, namely, their Community Cats program, where they reach out and work with communities to trap, neuter, and return feral cats and place adoptable ones into foster homes until adopters are found. They also have a Cats at Work program where they remove feral cats from dangerous situations and place them in homes and businesses where they are wanted and cared for. The Kittens on Deck program pulls kittens under six weeks old from the Chicago Animal Care and Control where they would be euthanized, and gets them into homes willing to care for tiny bottle babies. They even have a food pantry to provide pet food to community residents who otherwise couldn’t afford to feed their pets. Also, they really love special needs animals. All around, a fabulous organization doing so much for Chicago!

Q: I love the CATastrophes videos — how does casting work? Do you kitties have to audition, or are the roles written specifically for you and the other cats in your household?
Crepes: In general, we are cast based on our abilities to do certain things. For instance, Rocky (always remembered) was always very patient and predictable and was cast in anything that required him leaving the house, talking, or sitting still for long periods. I am frequently cast when costumes or general beauty are required.

Q: Your male human (DadFOD) directs the CATastrophe films… what is he like as a director? Does he work differently with you kitties than he does with the human cast?
Crepes: He’s very patient with us kitties, but he also pushes us to our limits. I’m not afraid to swat him when he requests one take too many. I have no idea how he works with humans – I usually go to my green room and take a nap when it’s their turn.

Q: You’ve been in a lot of videos now — which role is your favorite so far? And which is your least favorite?
Crepes: I really liked my role in “Sin Kitty.” I think I looked badass in that leather jacket. My least favorite would have to be the purr jobs episode because I was passed over in favor of Louie and Peabody. A casting mistake, to be sure.

Q: The new kid in your home, Louie, is turning out to be quite the star! What’s he like in real life? Dish!
Crepes: Well, quite frankly, he’s annoying. He wrestles me to the ground twice a day immediately before breakfast and dinner. He grabs all the older cats and attempts to snuggle us. And, for some reason, he keeps pooping on his own tail while persistently talking to himself as he walks about the house. So weird.

Q: You blog, you act, you’re a writer and you’re a crusader for special needs cats — is there anything you can’t do?
Crepes: Knit.

Q: When all is said and done, what do you think has been your greatest accomplishment so far?
Crepes: No one thing. Just helping kitties as much as I can. I think it’s all part of the same package. Also, I can jump on the counters, which I’d say is a pretty great feat for a three-legged cat.

Rescued is available on Amazon. You can get your copy here.