You are here: Home / Kitty Wisdom / Humans Are Willfully Destroying Our Bird TV! 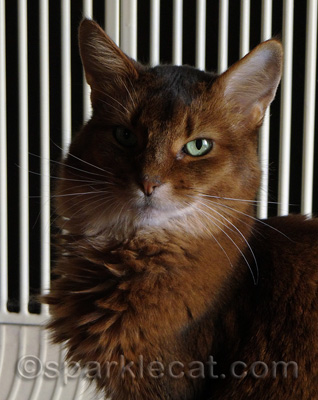 I know just about all you kitties reading this live with one or more humans, or at least live somewhere where you are taken care of by a group of humans, so you will be shocked by what you are about to read! Yes, I know humans are a very useful species — relatively easy to train, fun to play with, and they provide good food and housing. But they are not innocent creatures. Do you realize that the human you live with — the same one who dishes out your food every day, brings home fun cat toys and who lets you sleep on her head at night — is an unrepentant bird killer?

Okay, so maybe your specific human does not go around wantonly laying waste to your local population of birds, but the large numbers of humans that exist on this planet are helping to destroy birds in thousands of different ways. Let me give you some figures, conveniently provided by the U.S. Fish and Wildlife Service. Up to 976 million birds in the U.S. die by building window strikes each year, partly because humans insist on putting up plate glass windows in high rises that keep out the climate while opening up expansive views, and birds smash into them! Communication towers may kill up to 50 million birds, and high tension electrical wires electrocute up to 174 million of them. Cars — those vile things that humans consider a necessity and that take us kitties to the vet — kill 60 million birds annually. Pesticides account for another 72 million bird deaths. Birds die because of wind turbine rotors, aircraft, oil spills, by accidents in fisheries. This does not even take into consideration environmental encroachment — destroying native habitat to build factories and housing. Add that to the equation and we can safely assume that humans are responsible for billions of birds dying each and every year.

Are you as shocked as I am? Why haven’t humans invented ways to keep birds from smashing into windows, created farming methods that will not harm bird populations, found ways to keep them from being electrocuted, etc.? Are humans cruel, bloodthirsty creatures who enjoy watching a bird ram into a windowpane and laugh when one lands on a high wire and gets electrocuted? Are they selfish beings who really don’t care about the species that die off when new housing projects go up? Or are they just ignorant and think that turning a blind eye will make the problem nonexistent? Who knows? Humans can be very mysterious creatures, and sometimes it is impossible to explain their actions.

If humans keep up the direction in which they are going, all the birds we enjoy watching through our own windows may grow fewer in number and could even someday disappear. That would be a terrible tragedy!

The vast numbers of humans in the world are having a very negative impact on the bird population. What can we kitties do? Sadly, not much. While spaying and neutering are accepted practices among pets, humans refuse to do anything about their own population problem. And of course it would be inhumane to euthanize any — I think all us kitties can agree on that. However, there is something you can do right in your own home to help keep your Bird TV thriving: encourage your human to take steps to make sure your local birds don’t hurt themselves on your windows. There are a number of simple solutions. Because saving birds from deadly human behavior starts right here at home.