You are here: Home / Kitty Wisdom / How to Work With Your Cat’s Love of Routine 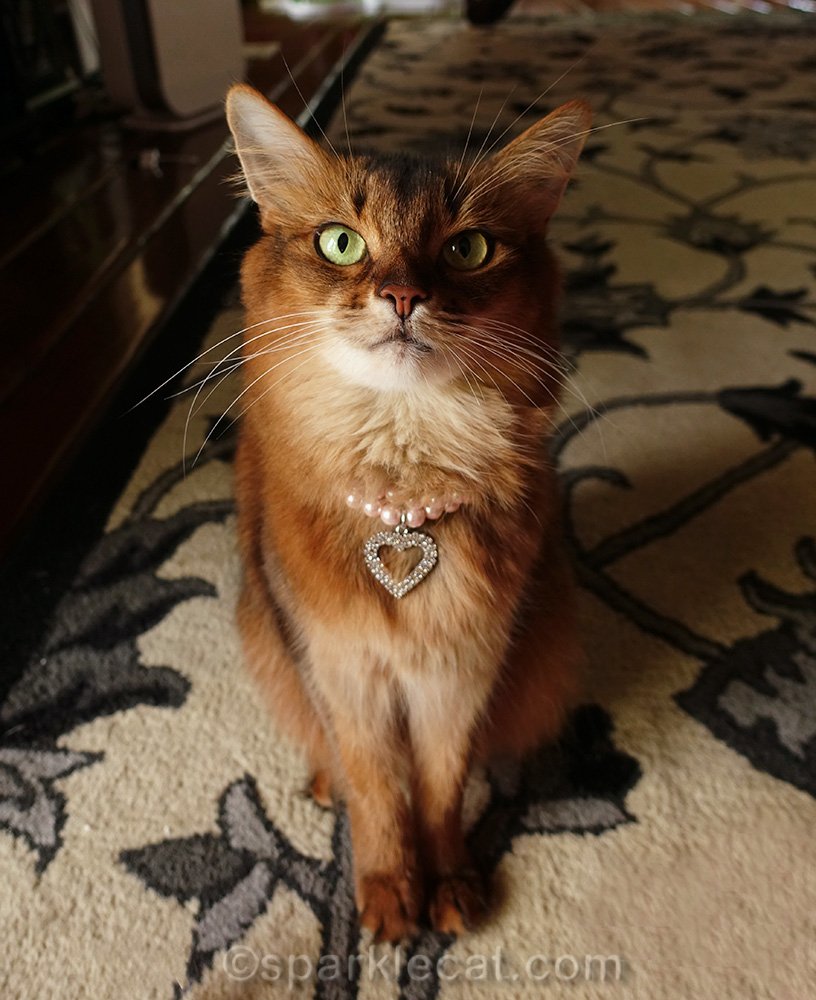 It’s common knowledge that we cats like routine. What isn’t common knowledge is what exactly routine means to a cat. It’s not always what you think. And it is possible to change routines and make new ones, if you understand what your cat is looking for. So I am going to help you with that.

First off, let’s see what routine is and isn’t, from a cat’s perspective.

Routine is a series of steps, repeated in the same order and the same way, repeatedly.

Yes, it is really that simple. Humans, however, tend to complicate it, or assign the idea of routine to specific routines, and not generalize it. They look at their routine of, say, going to and coming home from work. They may believe that when they go away on vacation the cat is upset that their routine is being disrupted. No, they are upset that you are leaving them. They see the routine you have of pulling out the suitcase and packing it. You see, the act of preparing for travel is another routine, and we recognize it.

A cat’s life consists of many different routines, and not all of them are daily routines.

Routines can be good or bad — for both cats and humans.

Cats have routines humans don’t like, such as waking them up at 3 AM for a snack. But you know what? That routine always seems to result in food, so why stop? And humans have routines that cats don’t like, such as hunting them down to take them to the vet. Yep, the whole hunting down part is a routine! I bet you didn’t think of it that way. Chances are your cat goes to hide in the same place, or series of places every time. She has ingrained this “going to the vet” routine in her brain. It’s a series of steps, repeated in the same order, and the same way, remember?

Some good routines are the mealtime rituals, the times when you pull treats or toys out of the special place you keep them, evening couch time, sun puddle time. They are all routines that make your cat happy.

Here is some food for thought for you humans about cats and routines.

The mealtime routine, the 3 AM routine, the vet visit routine — all these didn’t exist at one time. They developed over time and repetition, usually unconsciously. If humans want to improve a cat’s life, and their relationship with their cat, one of the best things they can do is consciously think through and create routines. That way, it’s easier to make up positive routines, and less likely to form negative ones.

If you let your cat create the routine, it’s your fault if you don’t like it.

Hey, you were the one who got up to dispense treats in the middle of the night instead of figuring out an alternate, more satisfactory routine.

You can change routines over time, and your cat won’t freak out, at least most of the time.

Don’t all of a sudden do everything different! Change one element of the routine, and leave it that way for a while. Then change another part of it. Keep going and eventually you will have an all new routine! Rewards for following the new steps along the way are helpful too. Cats enjoy rewards as much as they like routines.

Make up new, fun routines for you and your cat.

Set aside a new playtime, or way of playing. A new treat ritual. One routine my human has had for literally decades is getting her cats to sit up for tastes of our breakfast before she gives us our full meal. And we all like it! So she was teaching cats tricks for a long time before I came along.

Cats understand the differences in routines.

Do you know that I have different carriers for different trips? I have a small carrier for visits to the pet shops and therapy pet visits, my round Sleepypod for cat shows within driving distance, and my Sleepypod Air and Atom carriers for plane travel. (There is also the carrier that only gets used for vet visits.) When I see what carrier my human has pulled out, I know what kind of trip I’m going on.

Think before you act when it comes to your cat, and you will create much better routines! It’s never too late to start. Once your cat realizes there’s an order and a repetition, she will adjust. It’s easier for some cats than others, just as it’s harder for some people to change routines, but eventually nearly every cat will come around. 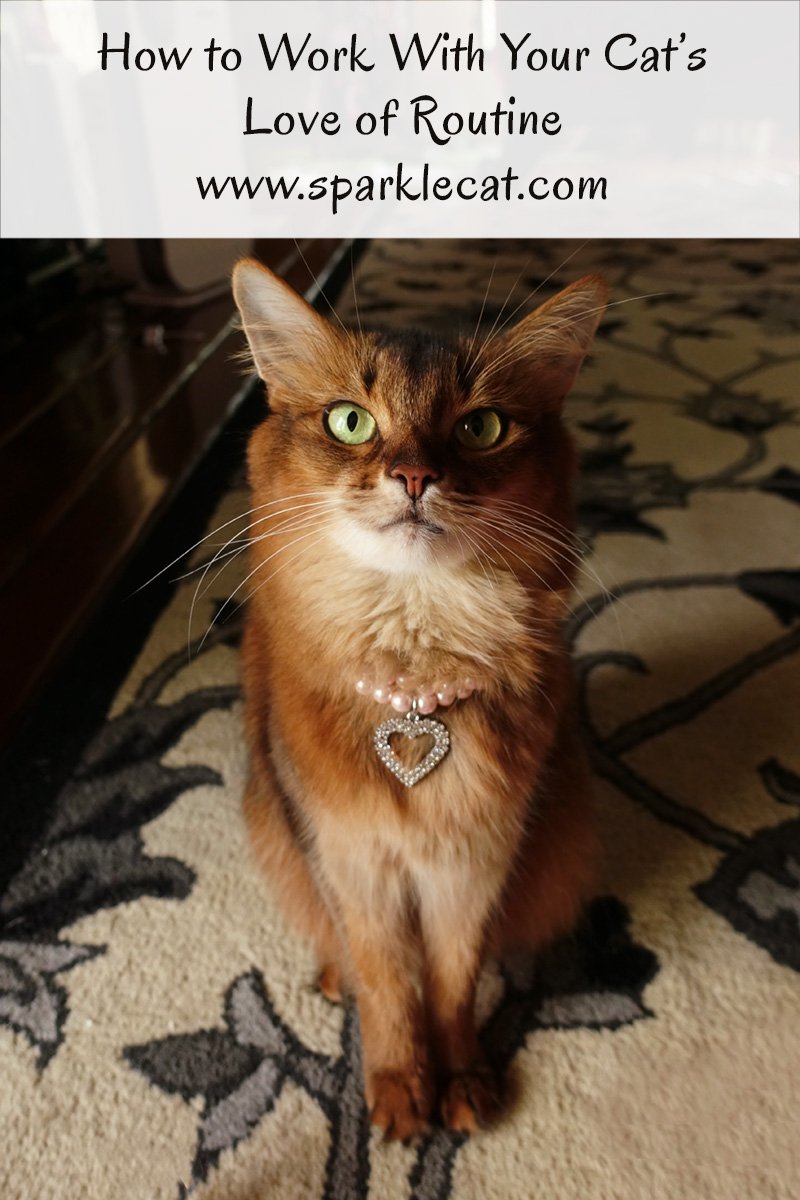 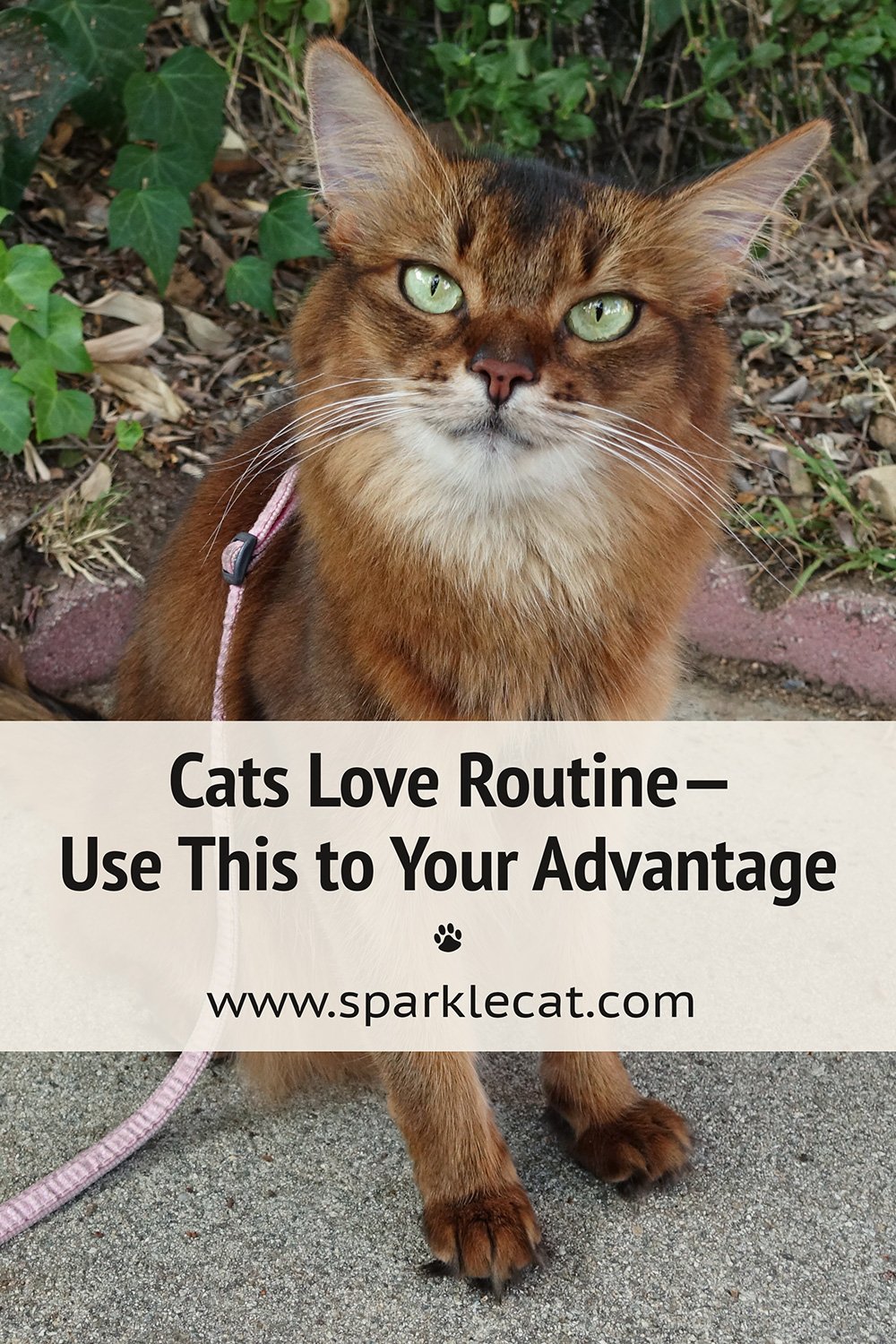