You are here: Home / Kitty Wisdom / How to Pick the Right Human 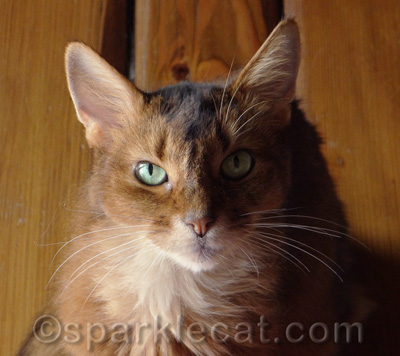 I know there are a lot of kitties out there looking for homes, and many of you are confused. You know you want a place you can call your own, and a human or humans to supervise, but you don’t know how to choose. There you sit in your cage at the rescue, or in the common room with a bunch of other cats, or maybe you are in an enclosure at a pet store, and you see lots of humans walk by. Which one is right for you? This is a crucial decision, and not one to be taken lightly, so I want to offer a few notes about different types of humans and what you might expect out of them.

Young Single Humans
On the positive side, humans who are grown up but still young can be lots of fun. They have loads of energy and will play with you and make your life feel like an adventure. On the negative side, they tend to be less responsible and may not have as much money as older humans, which means you will probably get cheaper food and possibly inconsistent veterinary care. They are also less settled than older humans so they may move around a lot. If you are an older kitten or young adult kitty, you can probably handle the perpetual movement of a young, single human and in return you will get a companion who sees the world in much the same way you do. But be careful how you choose. Make sure the young single human is ready for a lasting commitment! You don’t want to be an impulse acquisition that they may regret later. You also don’t want the type of irresponsible human who will abandon you if he or she has to move and is having a hard time finding an apartment that allows pets. You want a human who is going to be with you for the long haul, because chances are you will be with this human through relationships, maybe a marriage and perhaps parenthood. Looks can be deceiving — a conservatively dressed young human may not be any more responsible than one that wears all black and has piercings. The best way to judge any human, young or old, is to smell them out. There is honesty in scent, and if you smell anything a little off, run in the other direction!

Families
A family can be good if you are an outgoing kitty who likes having lots of human friends. If you are shy or like a lot of privacy, hang back from parents with kids because you won’t get much peace in their household. If the children are young, say five or younger, you may not want to be part of this family if you are a young kitten yourself. You kittens want to be around children that are mature enough to understand when the grown up humans explain how to handle you. Young adult kitties or older, outgoing kitties may enjoy a family with kids of any age. But proceed with caution in any case — make sure you aren’t just a whim. If the parents are looking for a cat only because they are being nagged by one of the kids, that is not a good sign. Again, you want to make sure that this family will be committed to you for life and won’t give you up when the kid grows tired of you (as kids often do). Suss them out, and make sure the parents are as enthusiastic about you as the kids are. Remember, even with families, you will probably have one special human you gravitate towards. If you find yourself drawn to one of the adult humans, and they return the interest, then that is a good sign.

Middle-Aged Humans
These are possibly the best types of humans a kitty could wish for! They are more responsible than younger adult humans, and if they have any kids, they are probably older and don’t need as much attention as school-aged kids — this means more time for you! They usually have more money than young adult humans too, so you will get better food, more regular health care, and perks — lots of toys and treats and maybe some high-end cat furniture! If a middle-aged human is looking for a cat, they generally have given the idea a lot of thought and understand the responsibility and commitment you deserve. While they are not as energetic as younger humans, they can still handle kittens — but they also like older cats too. With middle-aged humans, there are not many downsides — it is more a matter of seeing whether your personalities mesh than anything else.

Senior Humans
These humans are the nicest to have if you are not so young yourself. Seniors are the most understanding of all humans. They will be patient with you if you are shy and if all you want to do is sun bathe most of the day, they totally understand. Senior humans aren’t the best choice if you are a kitten or an active young adult kitty, however — they won’t be able to keep up with your busy, rambunctious ways! Older humans are also more fragile and sharp kitten teeth and claws can hurt them, and they may trip over you and hurt themselves (and you) if you try to ambush them. My biggest caution for senior humans is to really check them over for any health issues. One of the worst things that can happen to a cat is to be with a devoted senior human who dies and who has not made any arrangements for you. You could wind up homeless all over again, and you do not want that to happen! For that reason, cats who are middle-aged or older are safest choosing a senior human. If the older human is accompanied by a younger one (probably a son or daughter) who seems as taken with you as the older human is, then you have less to worry about — you probably have somewhere to go if you lose your human.

No matter which human you choose, remember, it is a lifelong commitment! Picture yourself spending years with that human you are tempted to rub up against. If the thought makes you hesitate, keep looking! The right one will come along.