You are here: Home / Kitty Wisdom / How to Discipline Your Human, if You Are a Cat 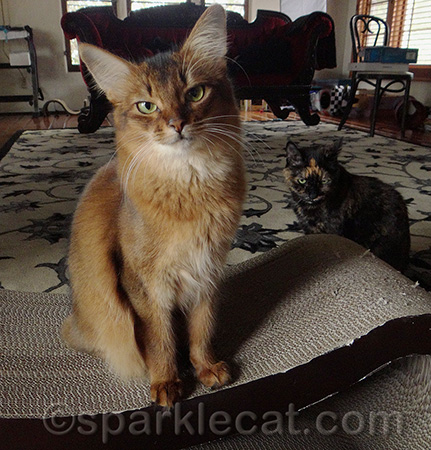 I have a very unpleasant topic to discuss with you today! And I’m afraid it’s one in which I am not very well versed. In fact, I am going to rely heavily on Sparkle’s notes. I confess, I am pretty bad about disciplining my human. I am a very easy-going kitty and I know I don’t discipline her enough! Sparkle would probably think I am spoiling her because I let her kiss me without getting mad and I eat whatever is put in front of me, even if I’m served something that’s not my favorite food. I even let my human give me baths and I don’t fight her. I can’t help it — I just want everybody to be happy!

But the truth is that humans can easily go out of control if you don’t train them properly, and part of that training involves discipline. You can’t get around it. Occasionally your human will display bad behavior. What constitutes bad behavior is different for every cat. I don’t mind wearing costumes, especially if I get toys and treats. Other cats may consider this a criminal offense. Some kitties hate being manhandled, kissed and hugged (for me, it’s part of my job). Trips to the vet, while often necessary, are grounds for punishment in the eyes of many cats. Being yelled at for scratching the couch when you have nowhere else to scratch — that is human misbehavior, no matter how easy going you are! So I guess we need to discuss discipline techniques. How else is a kitty going to keep her human in line?

Here are some methods to discipline your human, and how well they work — or don’t:

Washing yourself after being kissed/ fondled
Effectiveness: Medium
When a human touches you inappropriately (i.e., when you “did not want”), your first impulse is to lick all the human smell off so you feel like yourself again. And that is the right thing to do for human discipline because it also shows your disapproval of her behavior. The only thing is that humans often aren’t properly insulted by your grooming. Some really delinquent humans, in fact, seem kind of amused by it! So it only works if you have a really sensitive human whose feelings are easily hurt.

Passive-aggressive punishment (i.e., shredding something when you have been wronged)
Effectiveness: Low
Humans are not very bright. They will usually not be able to connect the dots between the bath you were forced into and the fact that you’ve unrolled every roll of toilet paper in the house. Or your leaping on the curtains after you’ve been told you can’t go outside. Oh, some smart humans will understand what is going on, but they merely think it is you who is misbehaving or “having a tantrum,” and they are still too obtuse to get that your actions are meant as punishment for their infractions. So if you feel like chewing the straps off a sandal because your human took you to the vet, do it for your own pleasure and don’t expect it to make your human behave better.

Attacking your human’s hand when she tries to pet your tummy
Effectiveness: Moderately high
Humans are best dealt with in a direct and to-the-point manner. When time lapses between the bad behavior and the punishment, as in the passive-aggressive tactic, they often don’t connect the two. So letting your human know right away that they have infringed on your space will work wonders for getting them to stop. The only problem with humans who rub tummies is that they tend to persist in this misbehavior, even after being disciplined time and time again. It’s like an OCD issue, and if we kitties were doctors and scientists, we would have already created a drug to treat it. As it is, we can only keep attacking the hand that rubs our tummies until it finally stops. The good thing about that is that once your human learns, she will generally warn other humans away from your tummy, no matter how temptingly it is offered.

(For the record, I love having my tummy rubbed.)

The back of disrespect
Effectiveness: Low to moderate
This is a cat’s go-to form of discipline when a human has done something to humiliate her. It’s good in that it clearly illustrates your displeasure. But it’s bad in that it doesn’t do a whole lot to stop your human from repeating her actions. Humans tend to think that the back of disrespect comes with the territory when they live with a kitty. They never consider that maybe they would not be subjected to it if they behaved better.

Ignoring and withholding of affection
Effectiveness: High
Kitties, if you really want your humans to suffer for their transgressions, this should be your go-to form of discipline. The longer you do it, the more effective it is. But you have to be strong and not give in right away, otherwise its impact will be lost. If you just ignore your human for a few hours, she may barely notice and will shrug it off. It won’t change her behavior. But if you manage to ignore her and even refuse to be in the same room as her for a few days or a week, you will really get to her. Your human will be begging you to be nice again. Just make sure you eat all your meals and do not hide — just walk away every time you see your human. If you don’t eat and you hide somewhere that’s not your usual getaway, she may think you are sick and take you to the vet — and that causes a whole new set of problems. Make sure she knows you are ignoring her on purpose, and it should be one of your best disciplinary tools.

So how’d I do? Do you have any other human disciplinary methods that work for you?