You are here: Home / Kitty Wisdom / How I Became A Therapy Cat

Each therapy cat has their own journey to passing evaluation and starting therapy cat work. And they are all pretty unique. My story is probably even more different from most. 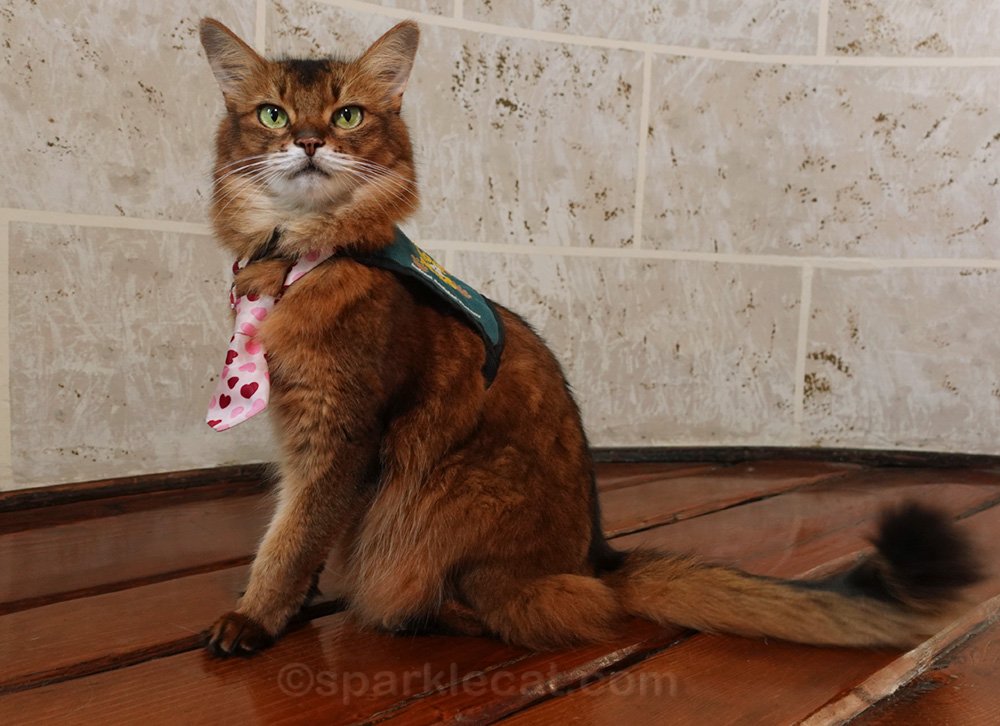 Therapy Cats Can Be Rescues or Breed Cats

There are both pedigreed and rescue cats that become therapy cats. I’m the former, of course. A lot of times the purebred are retired show cats, since cat shows are great training grounds for this type of work. We spend the day in a chaotic show hall, being carried around and handled by all these judges. If we adjust to that, and even learn to enjoy it, it’s a good foundation.

My human had already chosen my parents a couple of years before I was born, and that’s one way my story is different. She had met an older sister of mine at the San Diego cat show and was deeply impressed by her calm demeanor. She knew the breeder (she was Sparkle’s breeder, the founder of this blog). So she let her know she would like a cat with that temperament for therapy cat work.

My human had wanted to have a cat to bring to hospitals and other facilities since the mid 1990s. But she never found the right cat until I came along, a couple of years after she met my older sister. I was starting my show career at four months when she met me. She could see right away that I was totally comfortable and enjoying myself, even as a newbie. 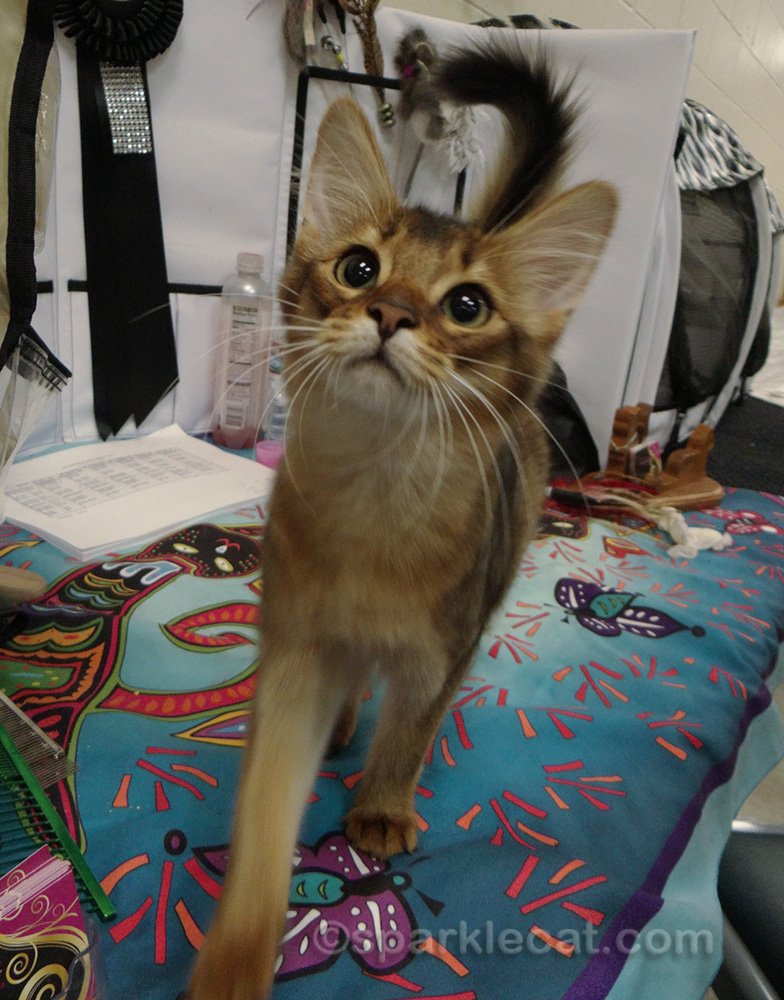 My breeder had my human take me back and forth to the judging rings. After a couple of shows, she agreed that I should go home with her, as long as she continued to show me. So that’s what we did. I had a good couple of seasons and even placed in my region in both big cat registries, TICA and CFA. Even though I no longer compete, I’m still a Ambassador for the Somali breed for CFA, and attend shows in that capacity. 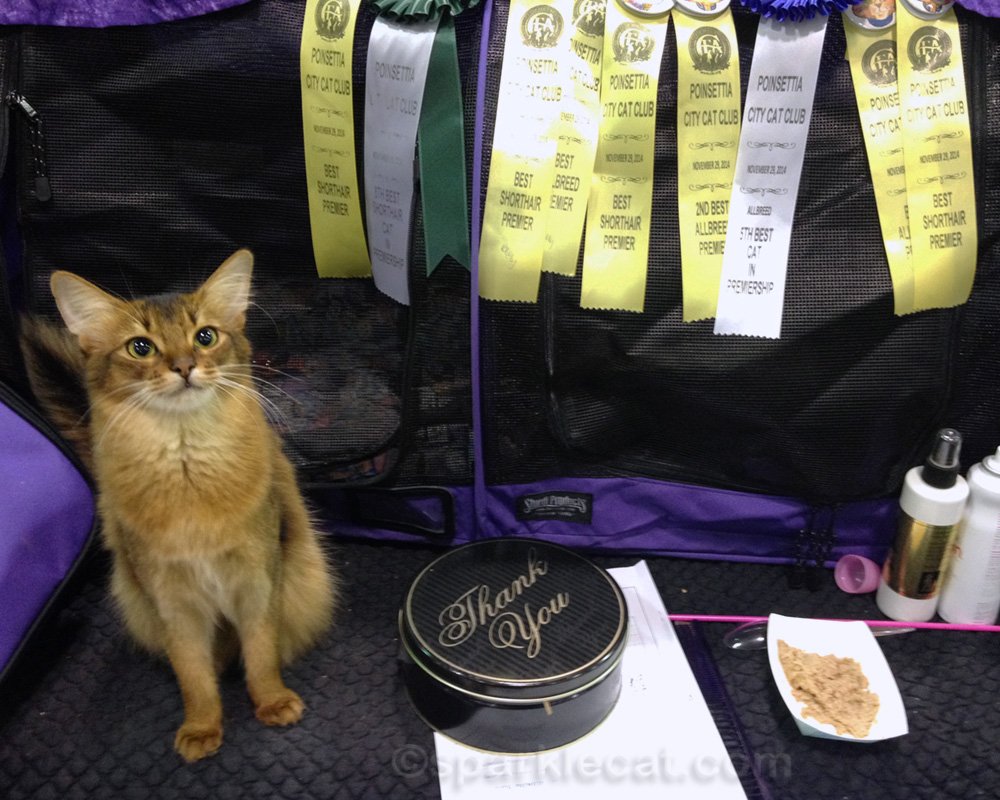 Being in shows wasn’t my only therapy cat training. A lot of it included travel, like staying in hotel rooms (which I still love!), and going for walks in the corridors. I even love airports, and having people make a big deal out of me at TSA (I know, I’m weird!). I also went to a lot of pet stores, and anywhere else my human was sure I was allowed to be. Anyone who wanted to pet me was allowed, and I loved it. 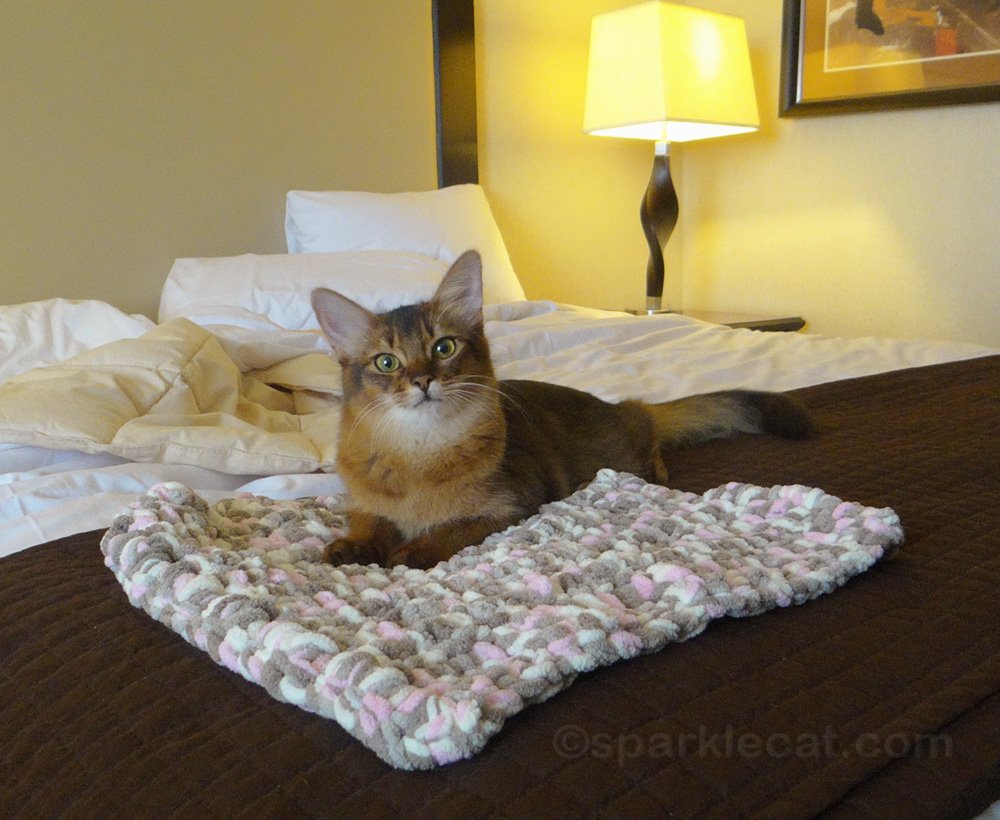 A few things cats need to know before qualifying for therapy work. We have to be okay with baths, getting our claws trimmed, and are harness trained. Therapy cats actually don’t have to walk on leashes, just be comfortable in a harness. Josie, the other cat in our program, rides in a stroller to the patients, as did the therapy cat before me, Tank. I happen to enjoy walking on a leash because I’m active and curious.

I already was used to the baths and claw trims because my breeder had started me with them for my show career. Harness training was easy for me because it turned out I was comfortable wearing things in general! Leash training was almost as easy — it just took a few treats to get me up and walking. I was attending events like the L.A. Feline Film Festival a month after I came to live with my human! 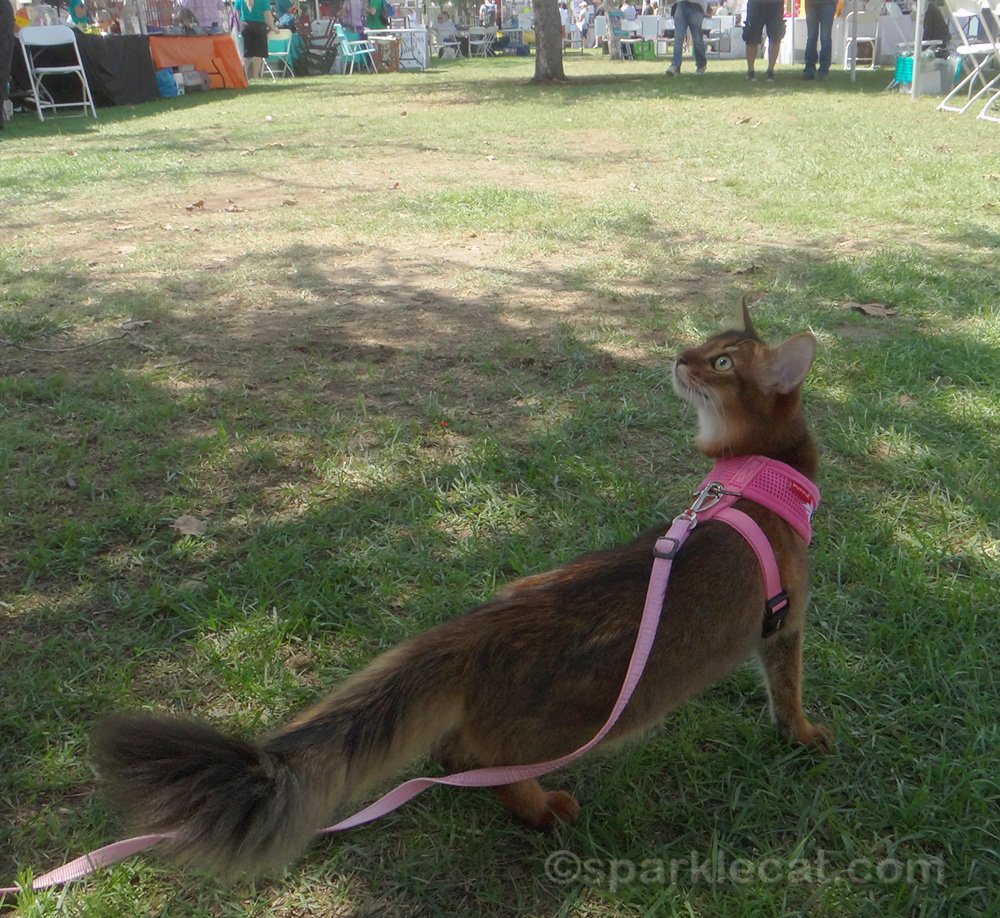 Therapy animals need to be at least a year old before getting evaluated. My human actually waited until I was two, because it took her that long to do research, and feel comfortable with her own responsibilities as the human half of our team. Human therapy pet partners have lots of rules they need to follow! 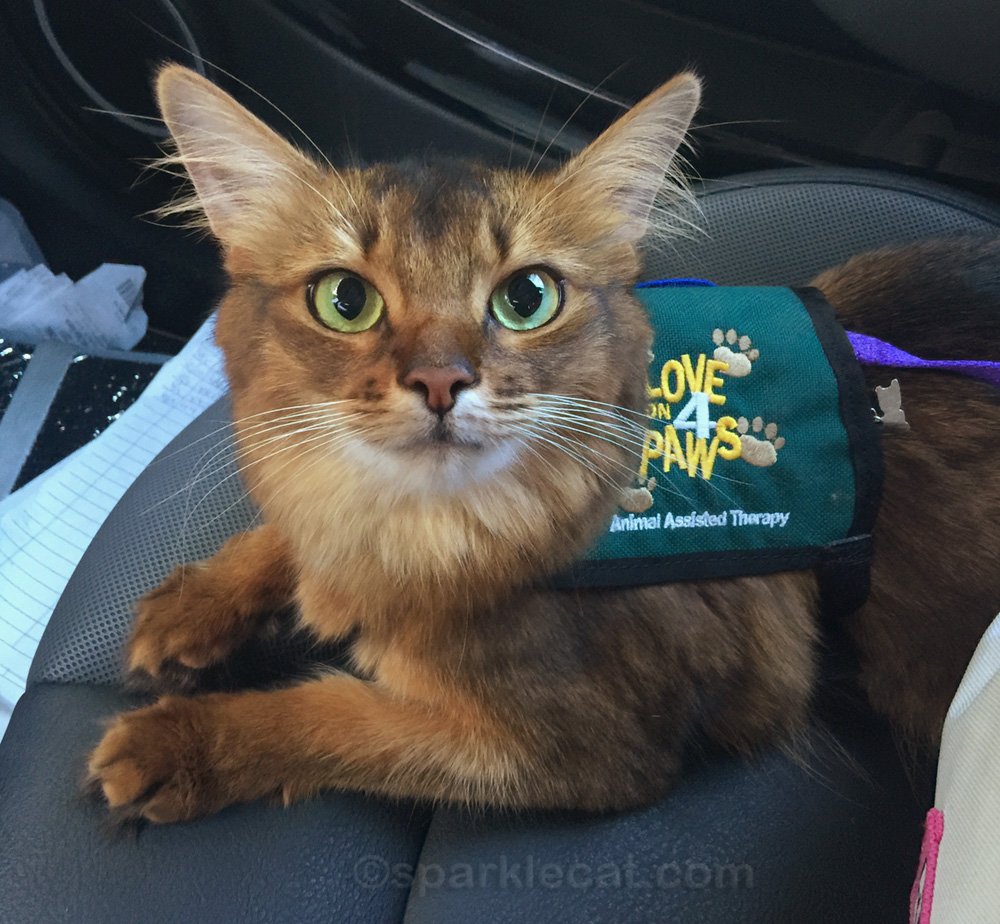 She also needed to figure out which organization we should be with. There are two national ones, Pet Partners and Love on a Leash. But neither of them had chapters, or evaluators, that were that close to us. Then she started searching local groups and found Love on 4 Paws, which visited several facilities in our area. The advantage to Love on 4 Paws was they already had a list of facilities they worked with that we could sign up with, and we weren’t on our own. So my human went with them and signed me up for one of their periodic evaluations. I passed of course! I got the regulation vest that day.

The Part They Leave Out 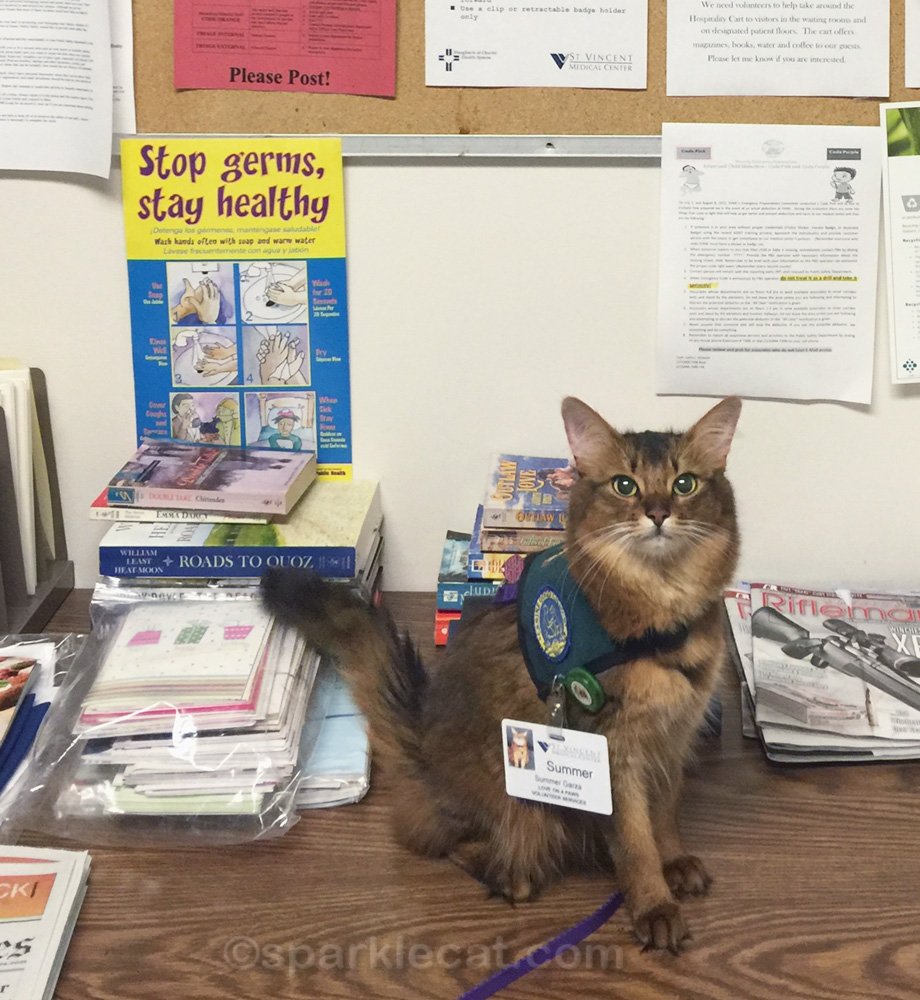 So that’s how I became a therapy cat. But there is one part they don’t mention. Passing the evaluation is one thing — actually visiting is something else. Sometimes a pet will pass the evaluation, but then it doesn’t work out when they do actual visits. Even when I was brand new, I was friendly, and I figured out pretty quickly that it was a good idea to curl up with the patients who were in bed. So it was clear right away I had the gift. That was in June 2016, and I’ve been a therapy cat ever since! 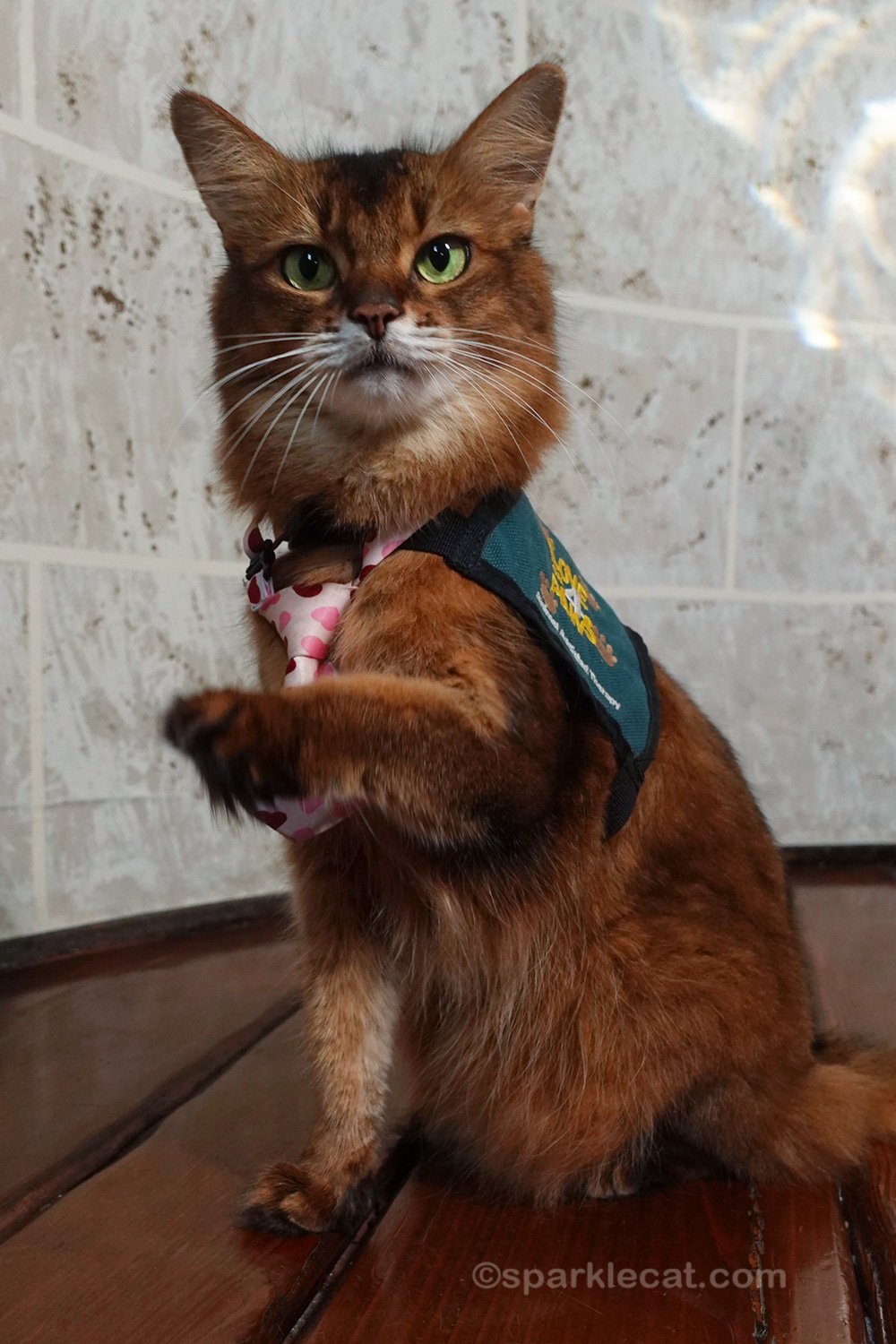