You are here: Home / Kitty Wisdom / Help Kitties Keep Their Claws With the Paw Project 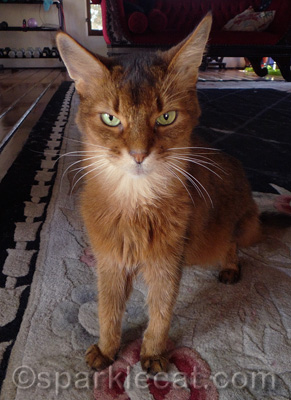 I have something very serious to discuss with you today. I know most of you who visit me on my blog are already against declawing cats and know it is wrong. But last week, my human went to see a documentary called The Paw Project, and Jennifer Conrad, DVM, the veterinarian and director responsible for it answered questions after the screening — and she pointed out some cold, hard facts that I think you should know! And it is up to me to tell you because a lot of veterinarians out there won’t.

There are studies that found out every one of the items on this list. They are not made up. Some come from veterinary journals, so I don’t understand why some vets will not acknowledge them.

For more information, you can go to the Paw Project’s website — there is lots to pour through there.

The bottom line is that declawing is painful and potentially crippling procedure. That last fact about longterm complications? Those were things like nail and bone regrowth and lameness. It did not include things like arthritis, phantom pain, or death from a cat escaping outside and not being able to defend herself against predators. Or cats being taken to a shelter because they started biting or refused to use the litter box after their declaw. Do not let anyone tell you declawing is no big deal. It is a very bad deal for both cats and the humans who live with them!

The Paw Project is a very thorough and well-done film about the fight to outlaw declawing in one of the few first-world countries that still allows it — the United States. It was a big fight, but the anti-declaw movement was successful in getting eight cities in California to ban declawing. That includes San Francisco and Los Angeles, so population-wise, this is actually a lot! But the battle is still going on everywhere else, and sadly, there are veterinary organizations that are trying to stop the no-declaw movement. These organizations have way more money than those who want to ban declawing, so it is tough going. Fortunately, humans are starting to wake up to what declawing really means, and how much it harms cats.

My human has been against declawing her whole life, and she and I want to help the Paw Project bring its message all over the U.S.! So I’ve created this tote bag for sale at my Zazzle shop: 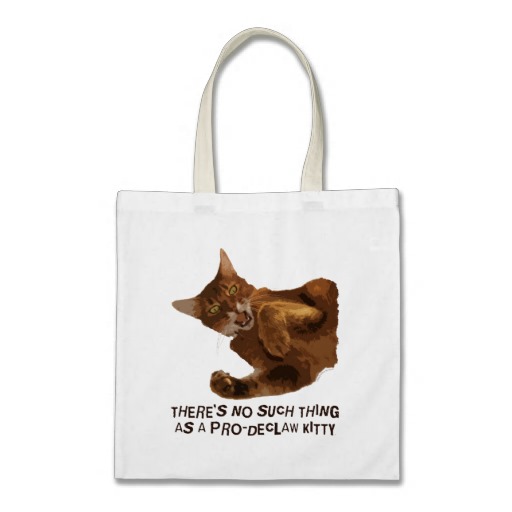