I’m really sorry I never properly introduced Monster. He was a Kitten Rescue sanctuary cat, and one of the happy recipients of the Santa Kitty Toy Hop. But in my blog post, all you really got to see of him was this: 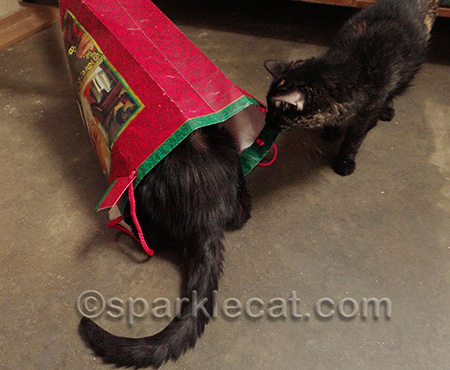 Monster was so entranced with the bag of goodies, he spent much of his time with his head buried in the bag. Eventually my human was able to coax him out to get a photo. 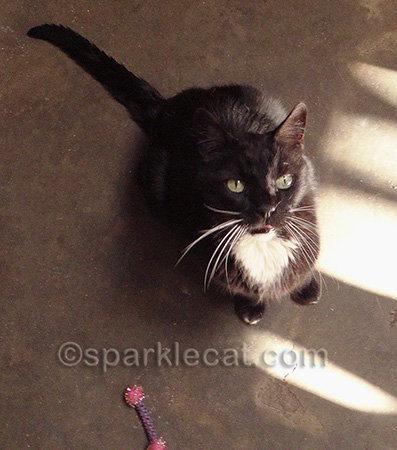 It doesn’t do him justice, though. You can see better photos of Monster on his page at Kitten Rescue’s Smugmug account. 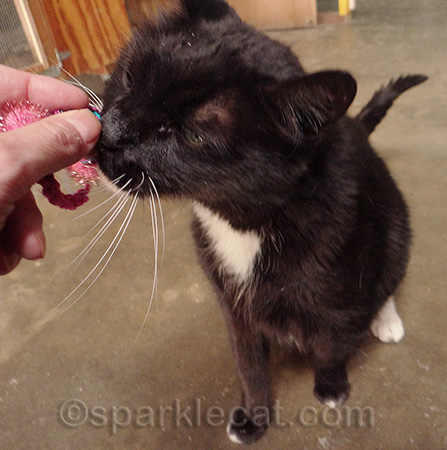 Monster was a real sweetheart and all the sanctuary workers and volunteers loved him. He and his sister Domino had been living at the Sanctuary for a little over four years. The two of them were adopted in the early 2000s as youngsters, but were returned as older adults when their human had a “lifestyle change,” whatever that means, and could no longer take care of them. Some kitties eventually find second chance homes, but that was not to be for Monster. He developed kidney problems and a few days ago, his body began to shut down. The Sanctuary manager held him in her lap as the veterinarian helped him to a peaceful end. 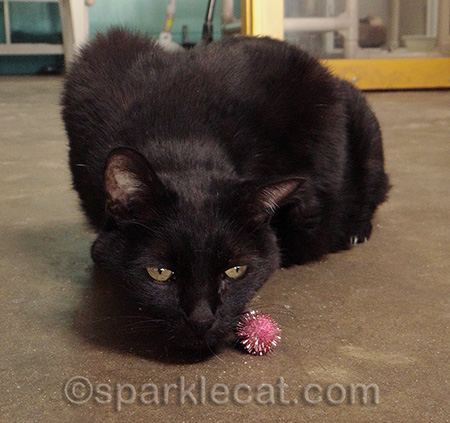 My human also remembers Domino, with her wonky ear, patch of white on her chest and quietly pleasant personality. Even though my human only spent a little while interacting with Domino and Monster, it was clear they were a bonded pair, and the Kitten Rescue humans had wanted them to be adopted together. Now Domino is alone, and I think she needs love, and a person of her own more than ever. Here is Domino’s Kitten Rescue Smugmug page. If you know anyone who lives in southern California who might want to give this girl a home, please direct them to Kitten Rescue’s website.