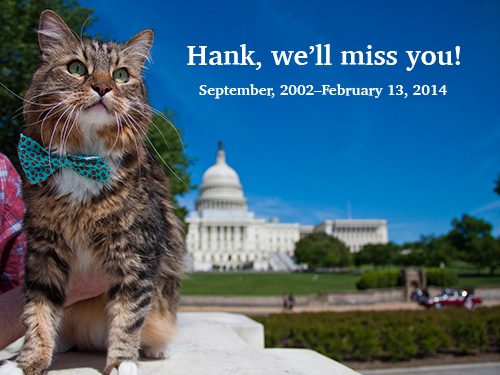 I hate to start the week off with an obituary, but Hank’s life was far too important to ignore. While this handsome Maine coon was not the only cat to ever run for public office, he was the first cat whose campaign gained truly widespread attention. His run for United States Senator from Virginia resulted in over 7,300 write-in votes and $60,000 in donations for animal rescue.

If you followed Hank’s campaign, you probably know about his humble beginnings — born to a single mother on the streets and winding up with his family in a kill shelter. Animal Allies came to their rescue, and Hank never forgot this kindness. It is no surprise that he used his senate run to promote rescue.

Hank’s political career got off to a rocky start. The first time he ran for public office — as State Senator — he got a measly 7 write-in votes. But that only made him more determined to succeed. In 2012 he stepped up his game and went for U.S. Senate with a well-run and hard-hitting campaign. Even an attack ad by a pack (PAC?) of dogs could not cast a shadow over him. It is no surprise that he got enough write-in votes to claw to third place behind two candidates supported by the bloated political parties who are currently keeping America’s humans divided, instead of seeking common ground from which to work together. It was a very strong showing for a cat who wasn’t even on the ballot.

Some humans have assumed that Hank’s campaign was merely a novelty, a silly joke to poke fun at when the “real” candidates were being too pedantic or uninteresting. But Hank was about a lot more than that. Let me quote the “Donate” page from his website: “Hank’s campaign is about fixing the real problems that we all face everyday, not about his political career, self-promotion, or selling books. That’s why Hank’s campaign is completely self-funded. Hank won’t accept one cent from individuals, corporations, or special interests – so there’s no worry about corruption or cronyism.” Human politicians could have learned a lot from Hank.

But that wasn’t all. The page goes on to say, “Hank knows that there are people suffering in the world and that he wouldn’t be here today if it weren’t for loving and caring individuals that save animals from euthanasia every day. That’s why Hank is requesting that donations be made to rescue groups and no-kill shelters that save lives and help stop the suffering of the booming pet population.” Can you imagine the change that would happen if human politicians followed this same path, instead of spending millions of dollars to tear each other apart?

Even though Hank returned to private life after the senate race was over, he left his mark on thousands of animal lovers, and he continued to keep in touch with his devoted fans through his Facebook page. It was less than two weeks ago that Hank started to get sick. The veterinarian diagnosed probable lymphoma, but a host of other physical problems developed and Hank couldn’t fight them all. He died in his humans’ arms just before 5 PM on February 13.

Hank was a unique cat and politician. In his human, Anthony’s words, “He was kind, pragmatic, intelligent, open-minded — and saw the world through eyes that we can’t. But I know he would want more than anything for others to keep on where he left off, whether cat or human or otherwise.” So instead of mourning his loss, we should see what we can do to lend a paw to some kitty who is less fortunate than we are. That, after all, is the legacy Hank wanted to leave.