You are here: Home / Kitty Wisdom / Four Tips on How to Train Your Human 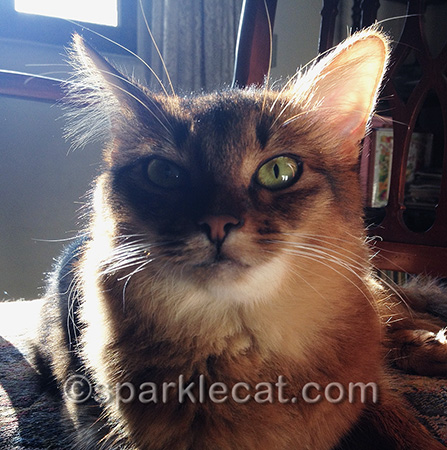 Did you know that January is Train Your Dog Month? Do you care? Didn’t think so. Shouldn’t we kitties declare January Train Your Human Month instead? Because as many of you know, a well-trained human is a happy one! When humans haven’t had proper kitty training, they tend to scatter their energy, have no focus and just behave very chaotically. They also tend to act out in negative, unpredictable ways. Humans need structure and a direction in life, and if we kitties don’t help them with this, who will? Certainly not the dog. The dog needs training just as badly… but that’s not our job.

So with all that in mind, here are four crucial human training tips.

1. Keep them on schedule. Cat behaviorists are always saying that we kitties need routine, but you know what? Humans need it just as bad, if not worse! Without a schedule, they will drift aimlessly, watch too much television, forget to change the litter box and, worst of all, feed you late! Basic human training, of course, is making sure they are always on time when it comes to meals. I’m sure most of you are already experts at reminding your human when it is dinnertime. Some of you may even be like Binga, and start reminding them an hour or two beforehand. Honestly, I think she is a little paranoid. You shouldn’t need to start your reminders more than 30 minutes before it’s time to eat. If you can get them on a schedule for litter box cleaning and playtime, that’s ideal!

2. Make sure they get enough recreation. Humans work, work, work and then they come home and do chores, and they think that recreation is zoning out in front of the TV. Oh, that is fun too, and I’m sure a lot of you kitties join them, but you’ve got to get them moving now and again. It’s a well-known fact that an active body releases endorphins. So encourage them to play with you often! I actually bring my toys to the humans so they can play with me. Not just the mousies either. I even will find the wand toys and drag them around the house until one of the humans takes the hint. Don’t let them slack off on this.

3. Be persistent — and consistent. Nagging looks bad coming from humans, but when kitties do it, we get things accomplished! If your human is not getting things done the way you like — whether it’s cleaning the litter box right after you’ve used it or opening the curtains to let in that morning sun puddle — keep at them until they get the idea. Consistent repetition is the best way to get your human on track, and it’s how they learn best.

4. Offer rewards. Humans can get a little cranky if you spend all your time ordering them around and nagging them, and that’s all you do. Can you blame them? Humans aren’t robots, programmed to do your bidding – they are living, breathing creatures with feelings, just like us kitties (only not as smart). A simple purr can work wonders. When they’ve done well, thank them. After dinner, Sparkle would sometimes jump on my human’s desk chair and give her head butts. My human knew that she was showing her approval and not asking for anything because, well, she had just eaten. Humans love little gestures like that, so be generous with them. Not too generous, though — you don’t want them to start expecting rewards for every little thing they do. So give them just enough, and hold back on occasion. Don’t spoil them.

I hope you’ve found these tips useful. All in all, I’d say that training humans is much more rewarding than training dogs. Lucky us.