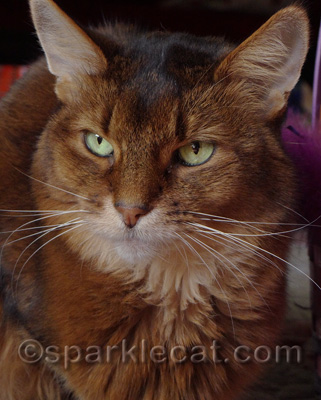 To be honest, I am not sure why I am even bothering to write about any lessons humans can learn from cats. When a creature loses all sense of instinct and then tries to replace lost inner knowledge with foolish things like MBAs, books about relationships and so-called value systems that more often than not conflict with someone else’s so-called value system, it kind of makes a kitty lose hope. Even so, I do think there are a small handful of humans who are willing to take note of feline wisdom and maybe even apply it to their own lives. And for those three or four people (I am being optimistic here), I am presenting five lessons we cats have that may actually surprise you!

1. It is fun to jump and fly through the air! Most humans lose this type of exuberance early in life, so it is no wonder they develop so many illnesses later on. And then their health gets so bad that they could not jump around if they even wanted to. So if you have not gotten to the point of no return, I suggest you start leaping around and feel the rush of your blood flowing and adrenalin pumping. There is a reason that cardio exercise is good for your heart health, because the heart is where you feel joy.

2. Stalking is a good thing! Okay, maybe not stalking someone you love who does not love you back, but just about anything else goes. If you keep focused, keep your eye on the prize, and are patient and persistent, you can catch that feather wand toy or anything else you may have as a goal. In fact, it is about the only way anybody accomplishes anything, no matter their species.

3. Talking is not necessary for communication. We cats meow at humans a lot because it seems to be the easiest way to communicate with you, but we really think it is an awkward, inarticulate way to make a point. If you watch two or more kitties spend time together, you’ll notice that they rarely meow (unless they are wrassling and one is being too tough with the other). Instead, we cats communicate through subtle visual cues that have a lot more meaning than mere speech. A brush of the tail or cheek, a flick of an ear, slow blinking — each of these actions contains a whole story. If humans would shut up sometimes and really watch what other humans are saying instead of depending so much on words, they would communicate with each other a lot better. Often, I notice that words get in the way of communication rather than making it easier.

4. Disagreements are not forever. If you live with more than one cat, you might notice they get into occasional arguments. There may even be bad meows spoken, and some hissing and whapping. But you can pretty much guarantee that a little while later, they will be hanging out together, sharing a sun puddle or curled up together on the sofa. When we kitties are pals, we don’t hold grudges. Of course we don’t always see eye-to-eye (no kitty or human ever does), but when we get in an argument, we get it over with and forget about it. The only time animosity between kitty pals may linger, it’s an indication that something else is going on (such as redirected aggression) — and that is something humans should explore in their own relationships too.

5. Always cover your you-know-what! We cats are known for our fastidious litter box habits. We like a clean litter box, and we like to cover up what we leave there. Humans should do the same and cover up their messes. It is only good manners. And yes, there are cats that don’t cover — they are usually the ones who think they are top cat. Have you ever noticed that there are boss humans out there who do the same thing? They let all their bad behavior hang out and create messes for everyone else. Nobody wants to work for someone like that, so follow your kitty’s lead and don’t be that guy.