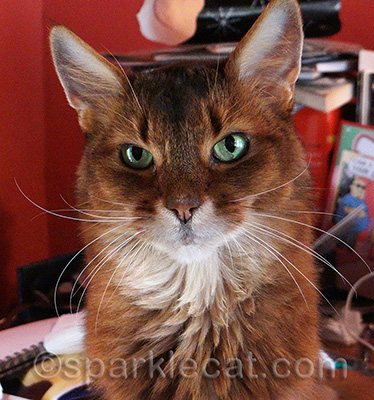 If you kitties have lived with humans for any length of time, you know they can sometimes be a challenge to cope with! They are willful creatures who often consider their own comfort before thinking about their cats’. They are unpredictable, occasionally loud and are known to eat really strange things. But even though they are quite a handful to manage, well-trained humans offer lots of rewards in playtime, treats and love.

Here are five tips that will help you, my fellow felines, unlock the mysteries of human behavior — and keep you sane at the same time!

1. Expect to be told “No.”
Humans mistakenly believe that the word “No” will have an effect on our behavior. They use it whenever they disagree with some way we are behaving. You are welcome to ignore this word — or not. Sometimes it is fun to surprise them and stop whatever you are doing. Of course, this does not mean you have to do a repeat. You can always go back to ignoring.

2. Passive-aggressive behavior will get mixed results.
Humans lack the ability to interpret subtle clues. So it may take them a while to figure out you are rusting that paper bag and making annoying noises because you are hungry. Usually, over time and after repeated, ignored “No’s,” they will figure it out, but you might want to consider a more direct approach, like walking to your food bowl and meowing loudly.

3. Humans do best following a routine, but you may have to teach them.
Like cats, humans are creatures of habit. But there are times when their routines do not match yours. In these cases — usually revolving around snack or meal times — it is up to you to stick firmly to your schedule. If you are not consistent yourself, you will get inconsistent results. This is especially true when it comes to morning routines. Don’t let your humans sleep in if it does not work for you. Be strong and persistent.

4. Humans can have annoying ways of trying to impose their will on you, but there are workarounds.
Do they pull out a spray bottle or speak in their loudest voice when you are trying to do something they don’t like? Perhaps your best tactic is to do it whenever they are not around to bother you. Yes, there is fun to be had in getting a rise out of them, but you also have to know when it’s just not worth it. Enjoying your most desired (and least human-liked) activities in their absence can help keep the peace.

5. Cuteness will overcome an amazing number of gaffes.
Did you accidentally break an expensive vase? Leave claw marks on the leather couch? Steal the roast that was meant for the human’s dinner? Roll on your back and wiggle around! Make that irresistible little “prrt” meow! Give with the innocent tilted-head look! All cats have something that they do that makes their humans melt, and the best time to pull it out is when you’ve done something that those humans are less than pleased by. But don’t just wait for those nasty situations to pull out the Cute card. When you want something, such as a taste of whatever the human is eating, big eyes a little paw pat on the leg will work way better than just jumping on the table and trying to grab it. Cuteness is your secret weapon, and the best part is, it never gets old.

Kitties, do you have any more tips you would like to impart?