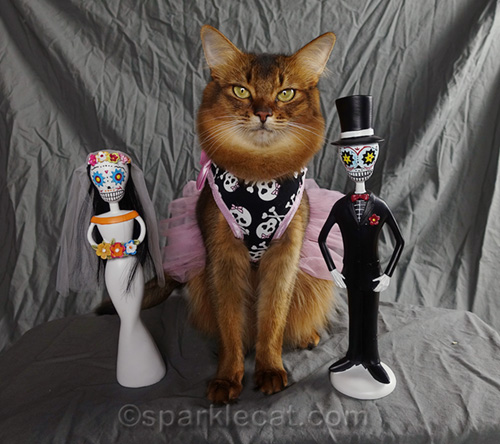 I will tell you something that’s not really a secret, but you may not know. My human doesn’t really care much for Halloween — she doesn’t like cheap candy or noisy children, and her favorite character to dress up as is herself. But she adores the Day of the Dead. It’s a holiday that’s bright and mystical and magical, all at the same time. And it’s part of her heritage as someone who is part Mexican (technically she is half Hispanic, but not all of that is Mexican), and who grew up in Los Angeles. 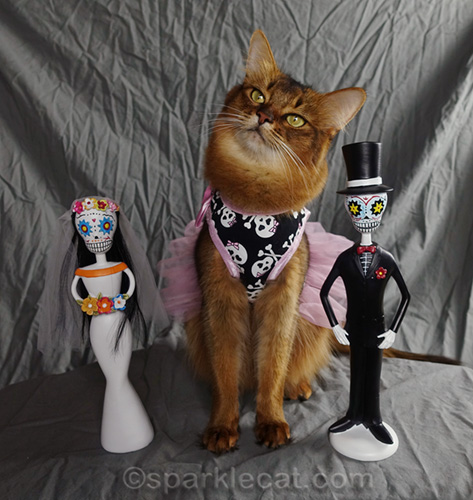 Día de los Muertos has its origins in Aztec times. When the Europeans came and forced their religion on the natives, they didn’t accept it wholeheartedly. They took many of their own holy days and symbols and adapted them to give the appearance that they were practicing the European religion. Originally this holiday was celebrated in early summer, but it got changed to coincide with All Saints Day and All Souls Day, November 1 and November 2.

The Day of the Dead is a way to celebrate those who have gone before. Instead of being sad and mournful, it is colorful, with good food, good memories, marigolds, the famous sugar skulls, and other traditions, like cleaning up and decorating headstones and plaques at the graveyard. The first day, November 1, is to honor children and babies who have died. It’s often referred to as Día de los Inocentes. November 2 honors adults who have passed on, and is the actual Día de los Muertos. 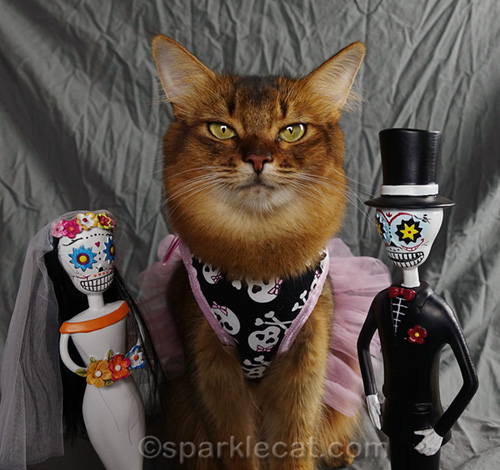 Día de los Muertos is not a sad or mournful holiday. It is a way to celebrate the magic that those who are gone have brought into your life. It’s a way to connect with spirit and with forces that can’t be seen, and which science has yet to fully explain. If you are Mexican or from parts of Latin America, it is time to spend with family and a reminder to treasure those close to you. For my human, the people she is closest to are not blood relatives, but she treasures them just the same.

I hope you take some time to honor those in your past, and celebrate them.