You are here: Home / Kitty Wisdom / Commenthon Results! And Some Commentary 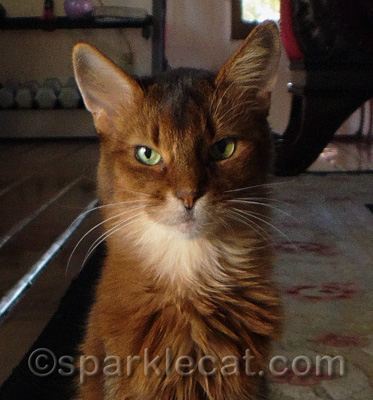 By the time the deadline was up for my feral cat commenthon, I had 74 comments, but somebody mentioned on my Facebook page that they were having a problem commenting, so I added them in to make it 75, for a grand total of $37.50… but Spitty’s human offered to match my human’s donation, so Fixnation is getting a full $75! Isn’t that awesome? 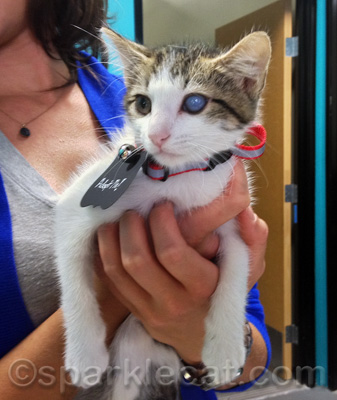 My human saw the little adoptable cutie above when she went to Fixnation for their National Feral Day party. Fortunately for me, I did not see her later, because you know my human would have been more than happy to bring her home!

Los Angeles is a very big city and we have several organizations that help feral and stray cats — community cats — through TNR (Trap, Neuter, Release), education and advocacy. Along with Fixnation, there is also Stray Cat Alliance and Kitty Bungalow. That is actually pretty amazing and wonderful, considering that they are all working in what is actually a hostile environment politically for feral cats. Several years back, some humans with very wrong information and attitudes forced an injunction through in this city that prohibits animal control from participating in any actions to help feral cats — or even talking about helping them! Never, ever bring a cat you don’t know into an animal control facility in the city of Los Angeles. If it is judged feral they have no choice but to kill it. I hope this changes someday. But until then, these organizations and others are working hard to protect homeless cats who just want to live and be left in peace.

What is going on in your city regarding community cats? If there are any organizations working on TNR and adopting out socialized former-feral kittens, please get involved. If your city has laws that hurt feral cats, find out if anything is being done to change this. I know that everyone who reads my blog is on the side of us cats… and it is up to you to act on your passion.