You are here: Home / Kitty Wisdom / Blogging Cats Step Up to Help Rescue Devastated by Fire 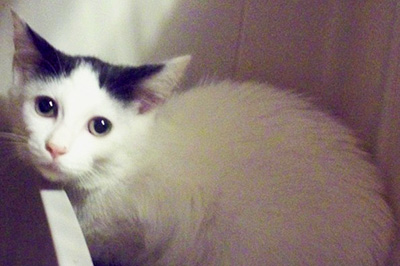 On Friday, January 24 — a bitterly cold evening — one of the worst situations imaginable happened at STOP (Stop The Overpopulation of Pets) in Mansfield, Ohio. A fire broke out in the basement of the small cat rescue. The fire department rushed to the scene and quickly put out the flames, but the cats remained in the smoke-filled house. In fact, many of the kitties in this free-range facility rushed into the basement — the very place they should have avoided. Because of the cold, firefighters had to work in shifts to rescue the cats, and neighbors pitched in to help. It took a couple of hours, but most of the 42 surviving cats were rounded up. Three died onsite of smoke inhalation.

All these cats were taken to Hull Veterinary Hospital for assessment, and that is where most of them still remain, being carefully watched for developing issues from the fire. Eighteen of the 42 cats have now been deemed stable, one of them being Fanny, the sweet-faced girl in the photo above. One of the other stable kitties, a three-legged youngster named Tracey, is being fostered by a firefighter and his family, who were already planning adopting another kitten in their care, Maddy. Another firefighter is hoping to adopt Charlie, a big Himalayan mix he personally saved from the rescue.

That leaves 39 cats being cared for, some in very serious condition. You can imagine the kind of vet bill that is being run up. And the building where the rescue was located is unusable.

Awful tragedies like this can bring out the best in everyone. Artist Bz Tat brought the plight of STOP and their kitties to the cat blogging community and word has spread. Dash Kitten, A Tonk’s Tail and Random Felines blogged about STOP. Paws and Effect and Cat in the Fridge (Crepe’s blog) both posted on their Facebook pages. Even BlogPaws did a post about the rescue. Not only did Bz Tat write a blog post, she helped out by setting up a Go Fund Me page to help raise money for the vet bills.

As of this post, the Go Fund Me page has raised $4,600 of its $10,000 goal! That is pretty amazing, when you consider that just before the fire, STOP, a local cat rescue that offered low cost spay and neuter services, was completely unknown to anyone outside of its area. It had no social media presence, just a Petfinder page. Now, this group is getting help from all corners of the earth.

If you want to help the kitties of STOP, there are several ways to do it. You can donate through the Go Fund Me Page. Or you can donate funds, food, litter or other supplies to the Hull Vet Clinic, 1300 Middle Bellville Road, Mansfield, OH, 44904. Or you can give directly to the shelter: Stop The Overpopulation of Pets Inc., 1152 Lexington Ave., Mansfield, OH 44907.