You are here: Home / Kitty Wisdom / Better With Cats!

Purina had a “Better With Pets Summit” in New York City this week, and I made sure my human was there to see that cats were properly represented. (Well, actually the Purina humans invited her, but she had to get my permission to go.) The Better With Pets Summit featured 16 humans who spoke about the various relationships between people and pets — from the internet to up-close-and-personal relationships to life-saving relationships. It was a pretty awesome one-day event, from what I gather! 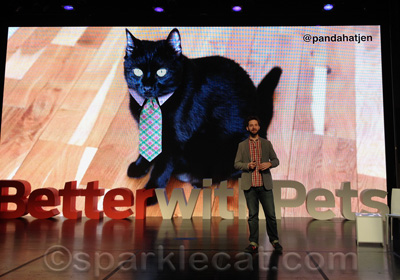 Some of the feline highlights of the Summit included Mike Rugnetta, host of PBS’s “Idea Channel” and Reddit co-founder Alexis Ohanian (pictured above with his cat, Karma, on the big screen). They all but admitted that we cats have conquered the internet! And not only that, but we kitties are also the conduit for bringing humans all over the world closer together. I can say from my own experience this is true because my human has friends world-wide, and my blog and I have helped her get to know them! 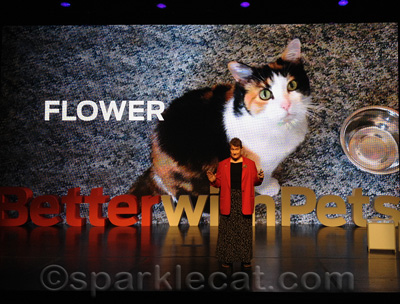 Dr. Robin Downing, a veterinarian who is the founder and Hospital Director at the Downing Center for Animal Pain Management, gave a very important talk about pain and pet behavior. One of the stories she related was about Flower, a pretty calico kitty who was almost euthanized because she was aggressive and attacked people. The truth was that she was overweight, arthritic and had such severe mats that she was in constant pain. That was what was making her act out. Dr. Downing worked with Flower and her human and saved her life. Since we can’t tell humans we are hurting, they need to be extra aware about what may be going on with us health-wise if our behavior changes. 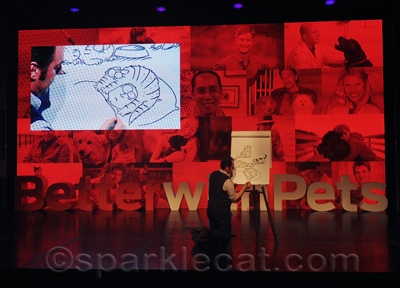 One of the Summit’s highlights was Simon Tofield, the artist behind the Simon’s Cat cartoons! He drew for the audience and told stories about his four cats. That is his tabby Jess in the drawing above, in her favorite sleeping position. 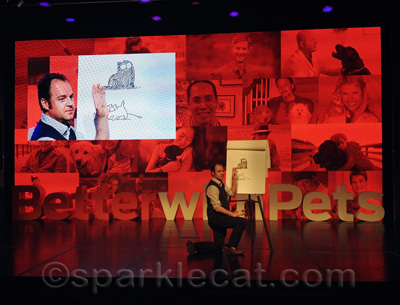 Simon told the audience a big secret: two of his cats — Hugh and Teddy — who were the biggest inspirations for the star of Simon’s cat and the kitten who’s his sidekick (or nemesis) are black cats in real life! He explained that he made them white in the cartoons purely because that way it is easier to draw them. 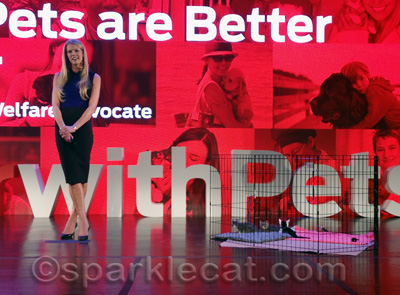 One of the other highlights of the day was when a trio of kittens was brought out and put in a kitty playpen! All the cat bloggers were excited… and it turned out they were being fostered by Beth Stern (author and wife of Howard Stern). Beth is a passionate animal advocate and does a lot of volunteer work with North Shore Animal League. So far, she has fostered nearly 50 kittens and cats and has found homes for all of them… well, except one. 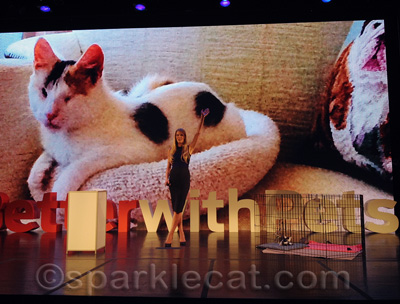 Kitna was a blind mom cat — the kind of kitty that would almost be guaranteed to be euthanized in a city shelter. Fortunately, North Shore Animal League got involved and the Sterns fostered her… and fell in love with her. That was a pretty awesome foster fail story!

This was an amazing event… oh yeah, and there were humans talking about dogs too. You didn’t think I was going to write about them, did you? If you want to know more, you can go to Purina’s Better With Pets website. Right now, they have clips of the talks, and will upload the full talks in early December.