You are here: Home / Kitty Wisdom / Avoid Getting Bitten by Mosquitoes Without Harming Your Cat – Here Are Non-Poisonous Solutions 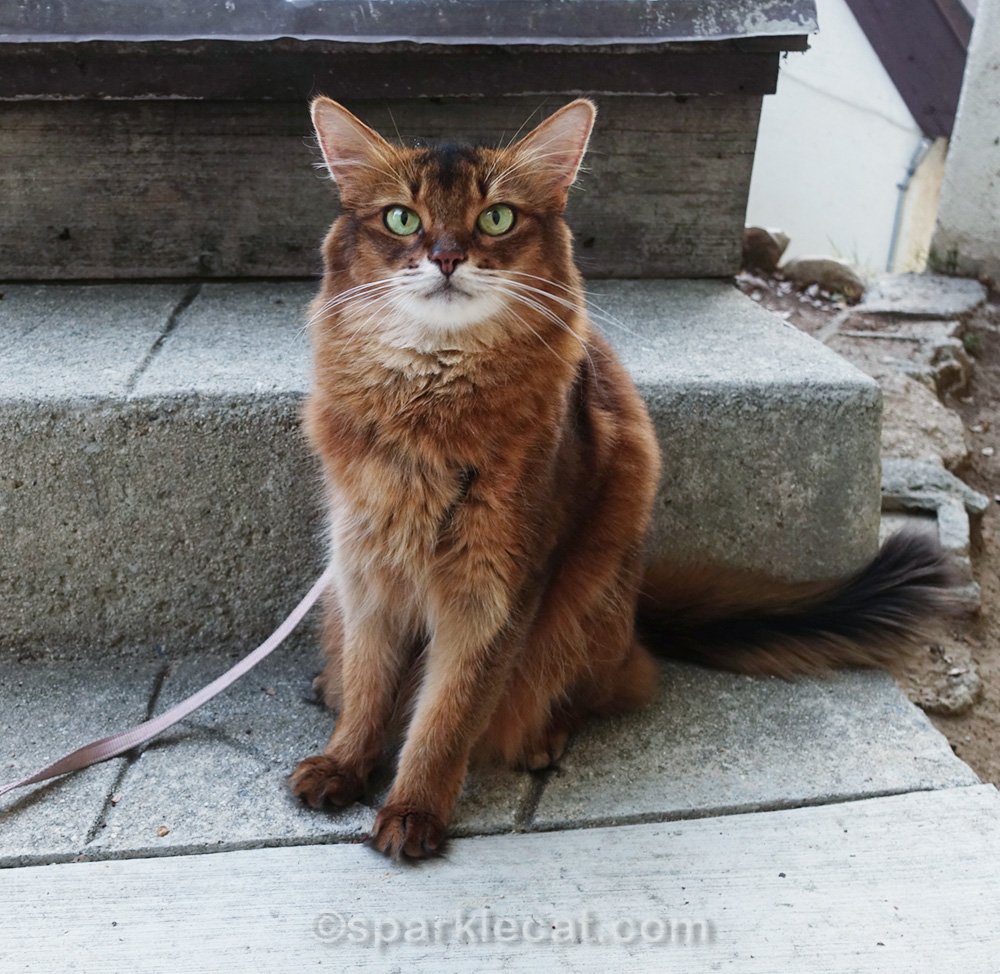 My human loves summer… but she’s not fond of the mosquitos that haunt her this time of year! They are attracted to certain blood types more than others, and unfortunately her blood type is one that they love. Whenever she takes me out in the early evening, she is almost guaranteed to get bitten.

Since she so often has me along when she is outside around the house, she can’t put on any chemical solution that might be harmful to me. And so many mosquito repellents out there are highly toxic for cats. So finally she decided to search for a solution. Here’s what she found — maybe some of these suggestions will work for you.

First, However: Mosquito Repellents to Avoid Around Your Cat

This is a common insect repellent, but never put it on your skin and then pick up your cat. My human holds me so much that she can’t ever use this for fear of making me ill. If your cat accidentally ingests DEET and shows signs of depression, tremors, hyper salivation, vomiting, or worse, seizures, take her to the vet immediately!

Another repellent, which is sometimes sold under the brand name Nix. It can be sprayed on clothes and camping gear or used as a clothing treatment — but don’t, if you are going to be near your cat. According to the International Cat Care site, Permethrin poisoning is one of the most common for cats worldwide, probably because it is a frequent ingredient in spot-on flea treatment for dogs, and people mistakenly use it on their cats. Symptoms of Permethrin poisoning include tremors, drooling, sensitivity to touch, and seizures, and it can be life threatening.

Mosquito Repellents That Are Safer to Use Around Your Cat

Mosquito Repellents Specifically Made for Cats – You Can Use Them Too!

There are a handful out there because, yes, cats get bitten by mosquitos too. And they may also work for their humans. But make sure they are specifically formulated for cats, not primarily for dogs. Dogs and cats have different sensitivities to toxic substances (see Permethrin above). So what works for dogs may harm cats. Even repellents for dogs that are called “natural” may contain ingredients that are poisonous to cats, especially essential oils. So read the labels carefully and avoid ones that contain things like peppermint or eucalyptus oil.

Cat friendly mosquito repellents may need to be applied on human skin more often than the usual chemical stuff, but at least it is safe for your cat. Keep in mind that some cats are extra sensitive to substances that wouldn’t bother other cats, so always keep an eye on your cat’s reaction to anything you haven’t tried before.

This skin softener has long been touted as a mosquito repellent (they hate the smell), and it won’t harm your cat.

If you don’t want anything on your skin, or you want to supplement what you have already put on, keep a bug zapper nearby. Or you can try an ultrasonic pest repellent. The sound they emit does bother bunnies and rodents (also some reptiles), but they don’t disturb cats or dogs.

Although your neighbors make give you the side eye, a hat with mosquito netting is a safe way to keep the little critters off you without chemicals.

There are also certain clothing colors that mosquitos avoid. If you want to know what they love, it is black, which is my human’s favorite clothing color! Dark colors in general tend to attract mosquitos. She would be much better off wearing softer colors like khaki, beige, and even a light gray.

Yes, mosquitos hate catnip. Lucky for us cats! This has not been tested, but if your human wants to rub fresh catnip all over her skin, it’s worth a try! At the very least it will be a cat attractant.

If you have a green thumb, basil, rosemary and lemon balm also repel mosquitos. If you are prone to getting bitten, they are good to have in your garden… alongside the catnip, of course.

As you can see, you have lots of options to repel mosquitos and still be able to pet and hold your cat without worrying about harming her. Have you tried any of them, or are you planning to? Let me know in the comments! 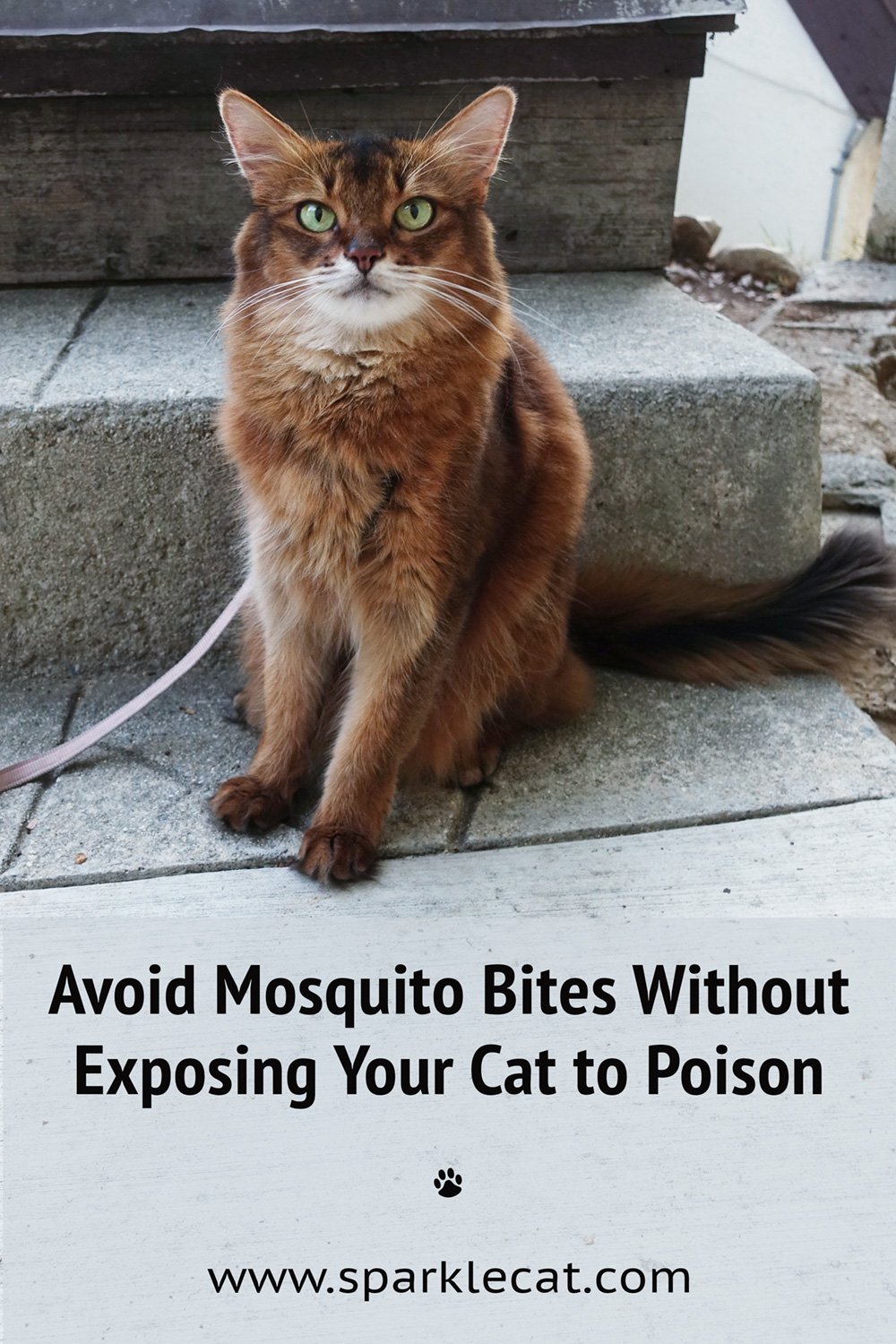