You are here: Home / Kitty Wisdom / About the Rescued Cats, and Their Causes, Part 1 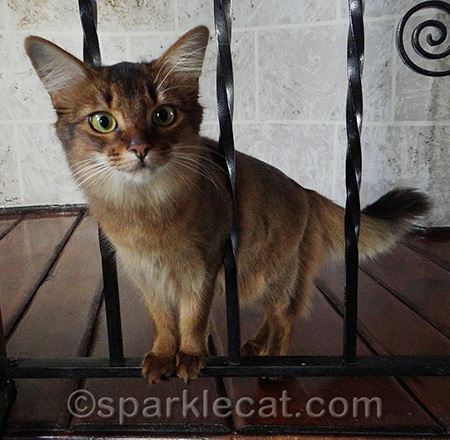 If all goes according to plan, Rescued, the anthology of rescue cat stories that’s coming out on my human’s indie publishing imprint, FitCat, will be coming out next week. But she isn’t planning a big, blowout book launch party like most publishers. She is having a year-long book launch!

Here is why: each author chose a rescue to receive a portion of the profits from the book’s sales, so there are 12 rescues. And each author has been assigned a month to promote the book, with a third of the profits from that month going to the rescue. The book’s expenses (short print runs, contest entries, etc.) will be evenly divided over the promotion months for donation purposes to make sure everyone has an equal playing field.

So you are probably wondering which cats got which months, and which rescues they are supporting… in case you want to help them out during their month. Well, that is the purpose of today and Monday’s blog post! Here are the first six:

Crepes’ month is February 2015 and she is supporting Tree House Humane. You probably know Crepes from her blog, Cat In the Fridge, and the cool CATastrophes videos her humans make! But she started off life at a clear disadvantage — she was missing a foot, a congental defect. She’s come a long way!

Ryker’s month is March 2015 and he is supporting Great Plains SPCA. If you were on Twitter in the old days, you remember Ryker, and if you weren’t, you still probably know those who came after: Allie, Faraday and Maxwell of A Tonk’s Tail. Ryker was one special guy, but apparently his breeder didn’t agree. She thought he was defective and almost had him euthanized! But he was saved and lived to make his mark on the internet.

Nerissa’s month is April 2015 and he is supporting Anjellicle Cats Rescue. Nerissa is the teller of tall tales on his blog, Nerissa’s Life, but before that, he and his young siblings and their feral parents showed up at his Peeps’ house, needing to be tamed and corralled. This is where Nerissa first showed his leadership skills — and his love for nip.

Lucky’s month is May 2015 and he supports Homeless Animals Rescue Team (HART) of Fairfax Station. Lucky was a victim of cruelty but his warmth and spirit showed through the terrible wounds he suffered when someone poured a caustic substance on him. Now healed and happily adopted, he uses his Facebook page to lend a helping paw to other animals in need.

Rama’s month is June 2015 and he is supporting Pope Memorial Frontier Animal Shelter. Rama was abandoned by his former human and survived alone in an apartment for several weeks before he was discovered. Brought to a shelter, he was depressed and refused to trust anyone, not even the couple who adopted him. His mistrust almost cost him his life.

Browser’s month is July 2015 and he is supporting Paws and Claws Animal Shelter. Like many of the cats in Rescued, Browser came from rough beginnings. But when he wanted to escape his hard life on the streets, the friendly place he happened to enter turned out to be a library. Becoming a library cat has brought Browser worldwide fame. He has his own blog, with news about his home, Pine River Library in Minnesota.

Tune in on Monday for the remaining cats and their rescues!