You are here: Home / Kitty Wisdom / About My Dad

I am one of the fortunate cats — I know who my dad was. His name was GC Tajhara Miles Davis and I wanted to share about him this Father’s Day because we lost him late last year. He died peacefully in his sleep in November and his human, my breeder, misses him lots. My dad was not just some stud cat — like any good, small breeder, his human considered him a beloved family member and very special.

In addition to being a Grand Champion and the father of other champion cats — and father of the internet’s most famous Somali cat (me!) — Dad was also a supermodel. He appeared on the cover of Cat Fancy Magazine twice, in 2001 and 2004, representing the Somali breed. 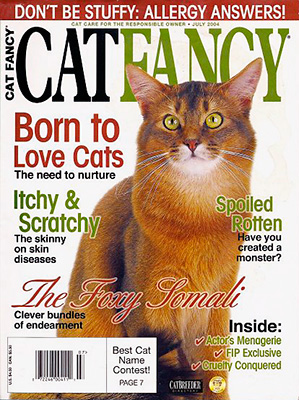 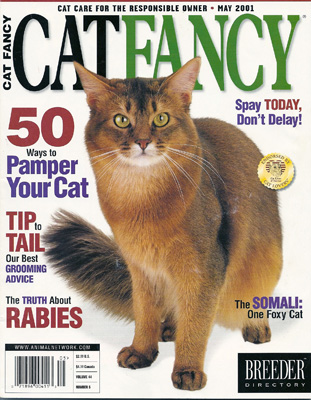 Can you see the resemblance between my dad and me? 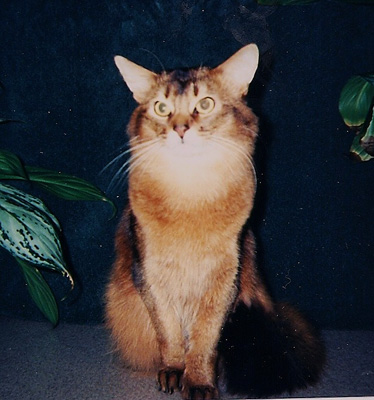 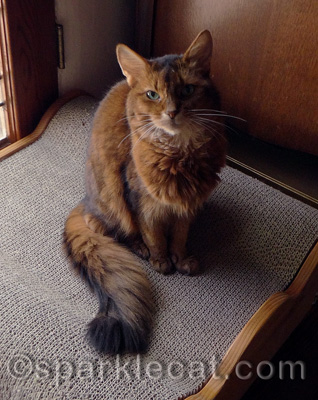 But the titles he won at shows and his magazine credits don’t really tell you who he was. My dad was a friendly guy who never met a stranger, and was very loyal. Whenever a family member was ill, he was there in bed with them, sending them healing purrs and energy. He was that kind of a kitty.

He was named Miles because of his human’s love of music. (In fact, my mother was named Tina Turner.) Like his human, my dad loved jazz and enjoyed listening to his favorite tunes while traveling to the shows in which he competed.

Dad’s human does not have many photos of him — a lot of photos she had were lost in a computer crash. But this one, I think, really captures who he was. 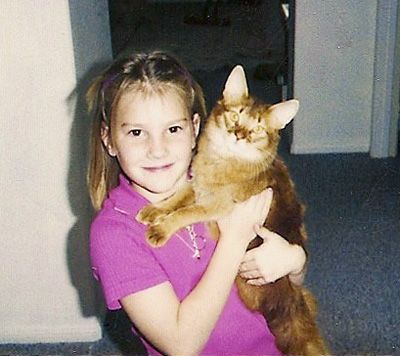 While most of Miles’ kids are just homecats like me (I did not have a show temperament and I was spayed shortly after I came to live with my human), he lives on in a daughter, CH Tajhara Jazzy Jane and a son, Tajhara Elson of Chatboulie who lives in South Korea! There is also granddaughter, CH Tajhara Calamity Jane of Gunsmoke and two grandsons which my human hopes to meet at a cat show sometime in the future, Tajhara Gato Barbieri and Tajhara Miles to Myles (a take on the Miles Davis tune, “Miles to Miles”). But even though we all carry hints of who he was, my dad was an exceptional guy and he really set a high bar for all of us, not just in looks, but in kindness.

I love you, Daddy. I will always remember you.

Remember to nominate me for The Petties, especially my story Humans Are Willfully Destroying Our Bird TV (https://www.sparklecat.com/special/humans-are-willfully-destroying-our-bird-tv) for Best Blog Post! You can do this every day until June 28 — the more times, the better!