You are here: Home / Diary / Working the WAG Petcon 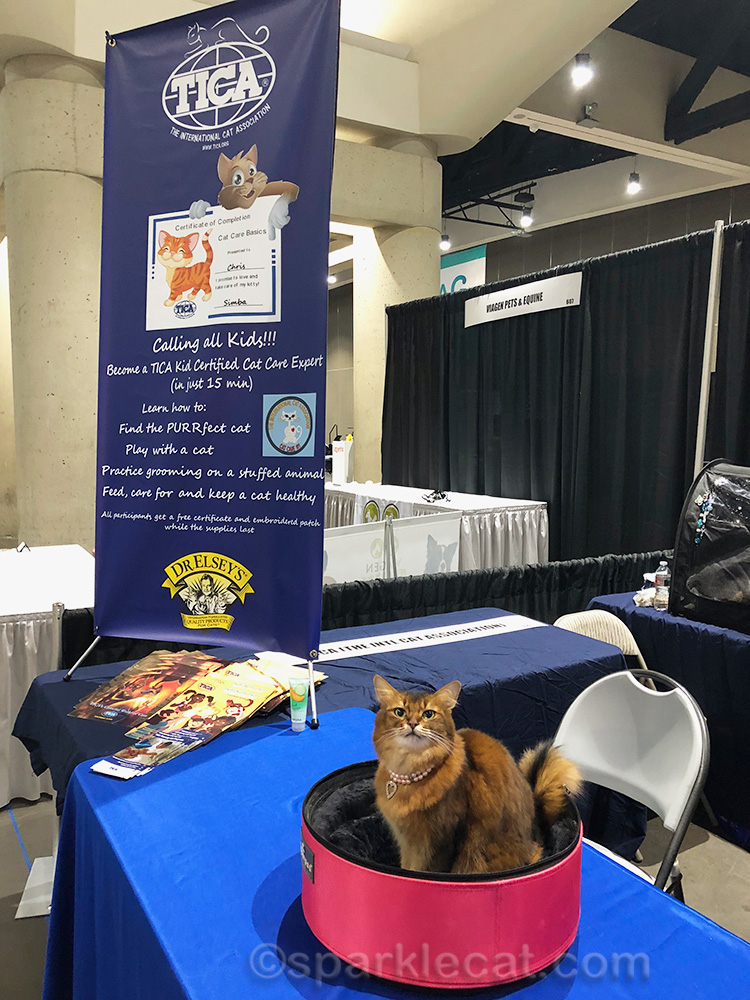 I had some fun work come up! I got to help out at the TICA booth at the WAG Petcon in San Diego. WAG is part of Vet + Pet West, an event that provides cutting edge education for veterinarians — and also people who live with pets. Our part of the San Diego Convention Center had the exhibitor booths, and short, educational talks. TICA — The International Cat Association — needed some “bullet proof” cats to be present at the booth, and my breeder suggested me. I don’t know if I’m bullet proof, but I do know how to work a crowd! 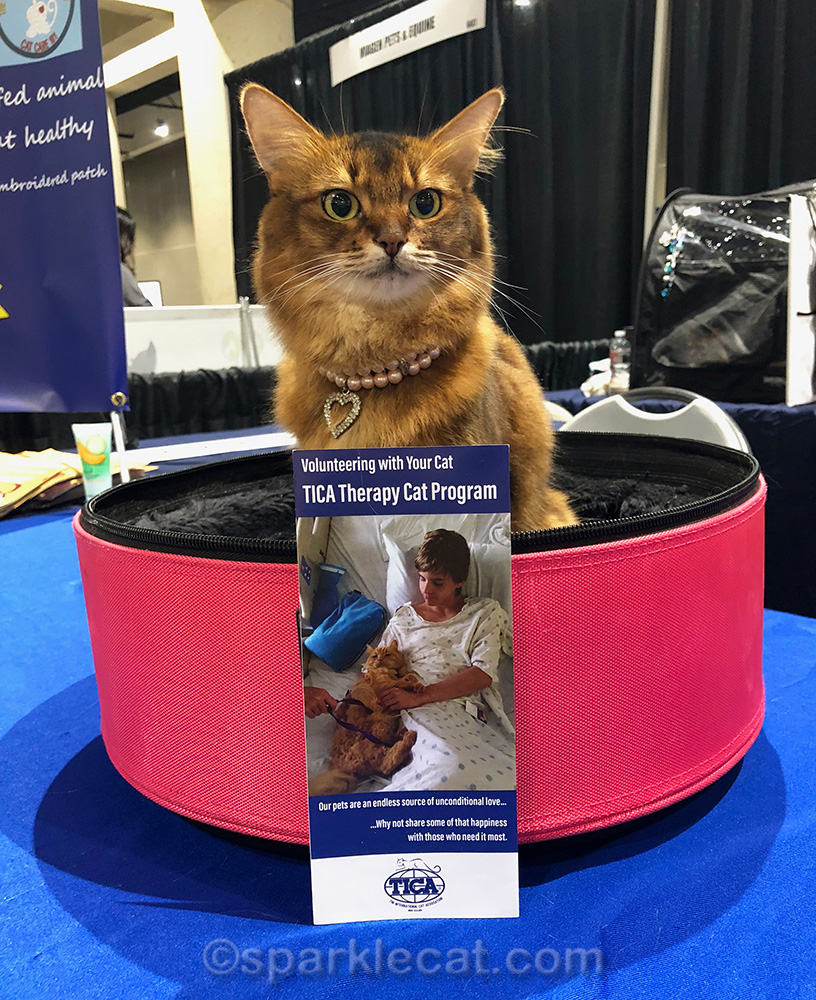 Not only is TICA the largest registry for pedigreed cats worldwide — I’m a two-time regional award winning show cat for them — they also have a therapy cat program, among other things. TICA is also a big supporter of all cats, not just breed cats, and most shows have rescues doing adoptions there. Since only 5% of the over 92 million owned cats in the U.S. are breed cats, it’s important to look out for the well being of them all. 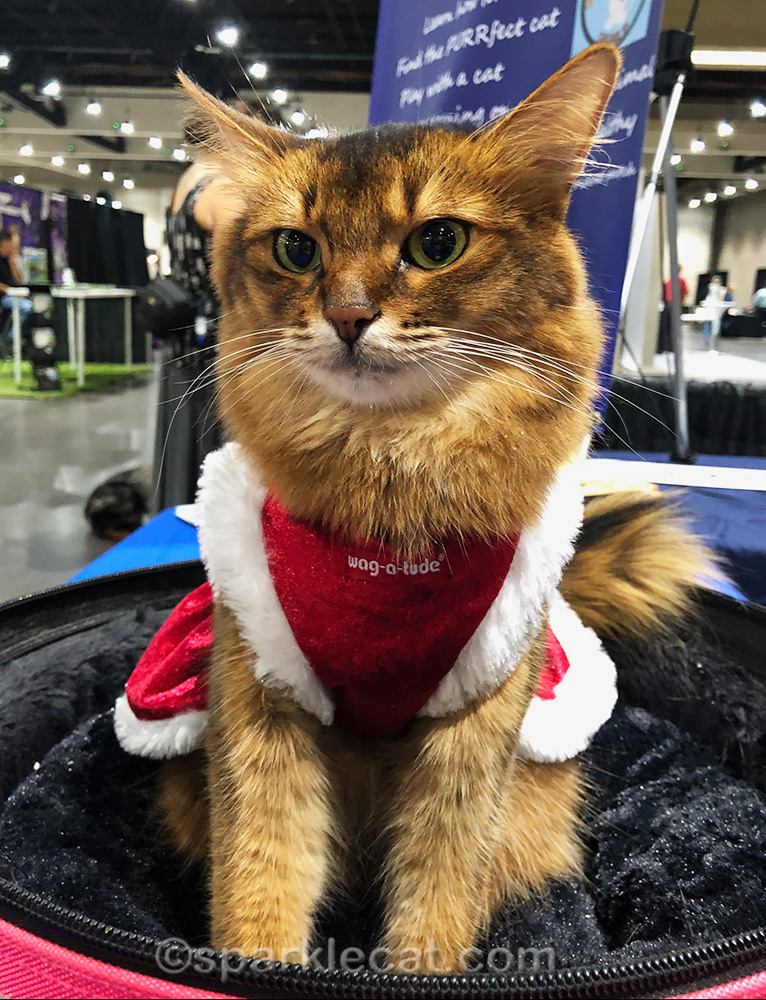 I only brought a few wardrobe changes, since I figured most people wanted to pet my soft fur. One was this Santa dress. 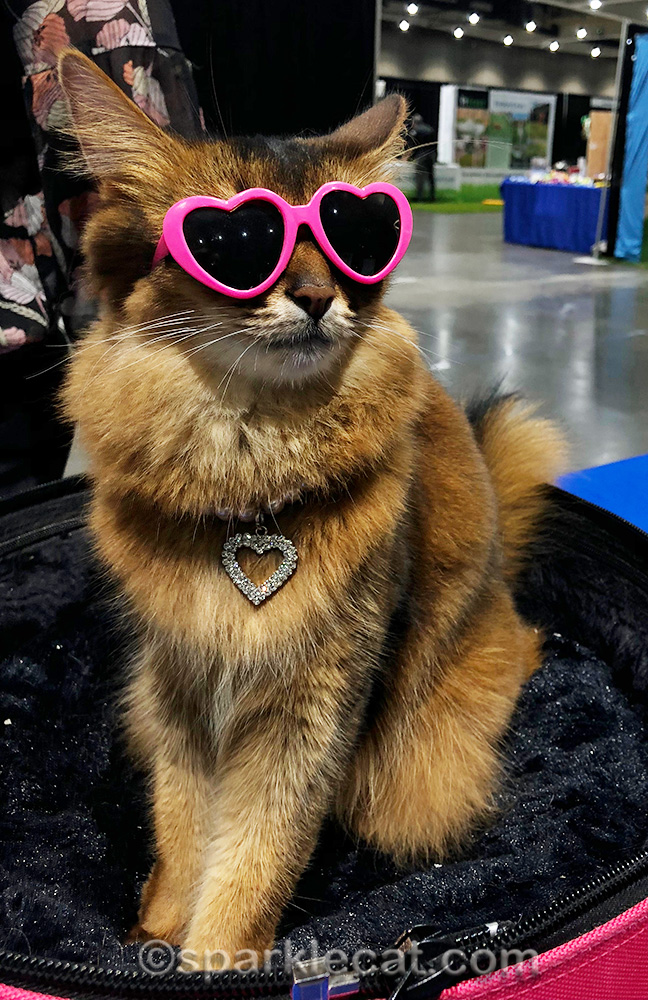 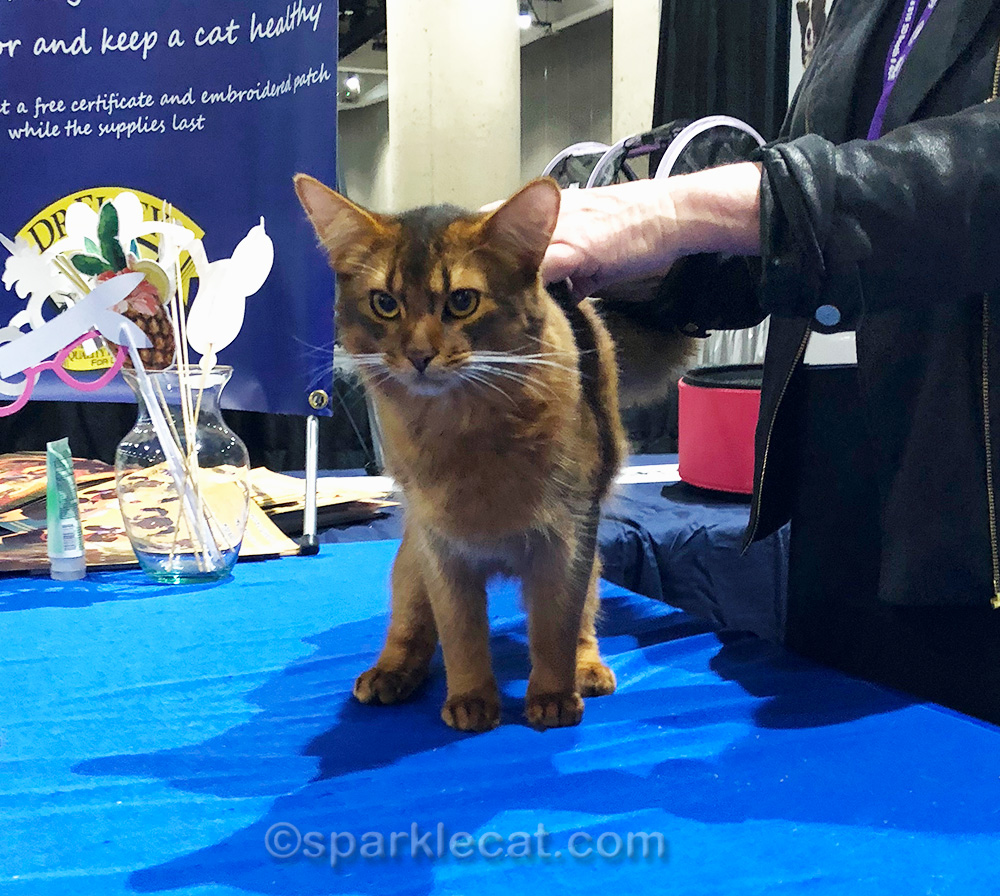 Obi was also there! This was his very first time doing something like this, and my breeder was very protective of him. People were allowed to bring their pets, which usually meant dogs. And while I am used to them, he really hasn’t seen any, or maybe just one. But he has flown to the Netherlands, and to Bogota for cat shows — and he has done a bunch of cat shows! — so it’s not like he’s some sort of newbie. He did really well. There was also a Bengal at our booth, but my human didn’t get a photo of him. He was very nice. 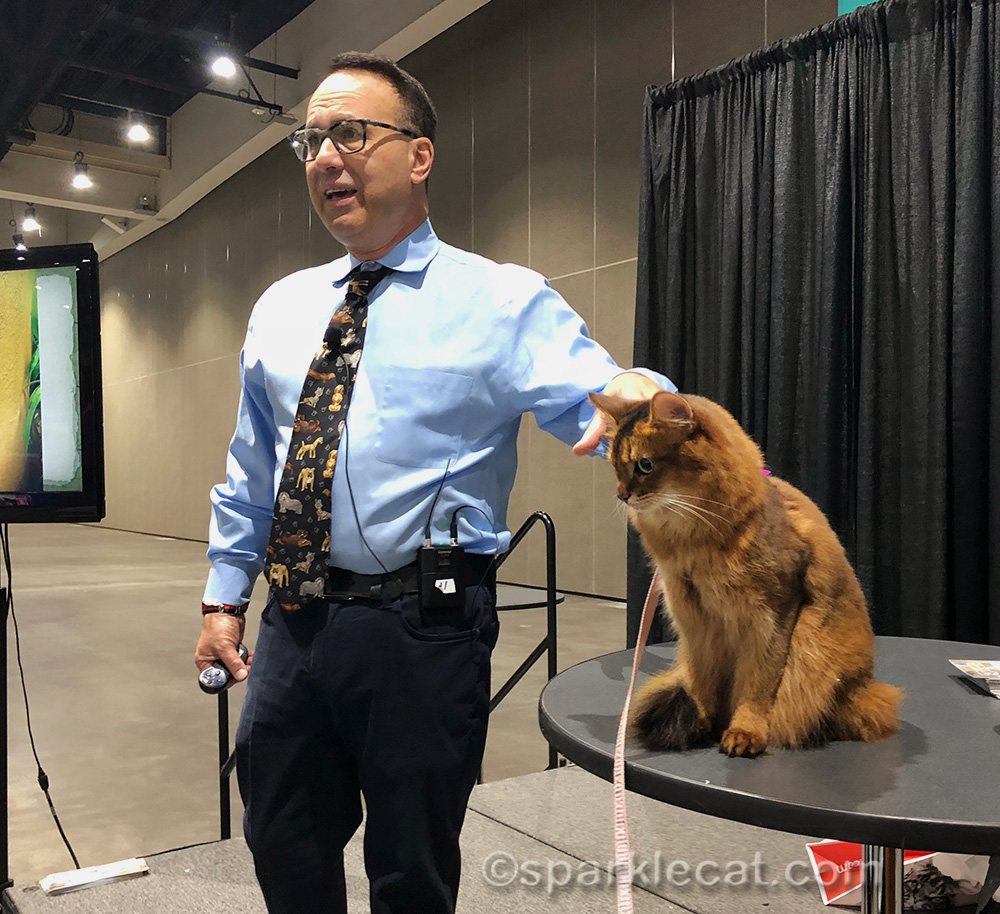 Then something exciting happened! Renowned pet expert and animal advocate Steve Dale stopped by our booth. My human knows him, and they chatted for a bit, and… he wound up asking me to join him onstage for his short show hall talks in the afternoon! The topics involved cat behavior, and helping cats be more social and outgoing so it was a natural fit. 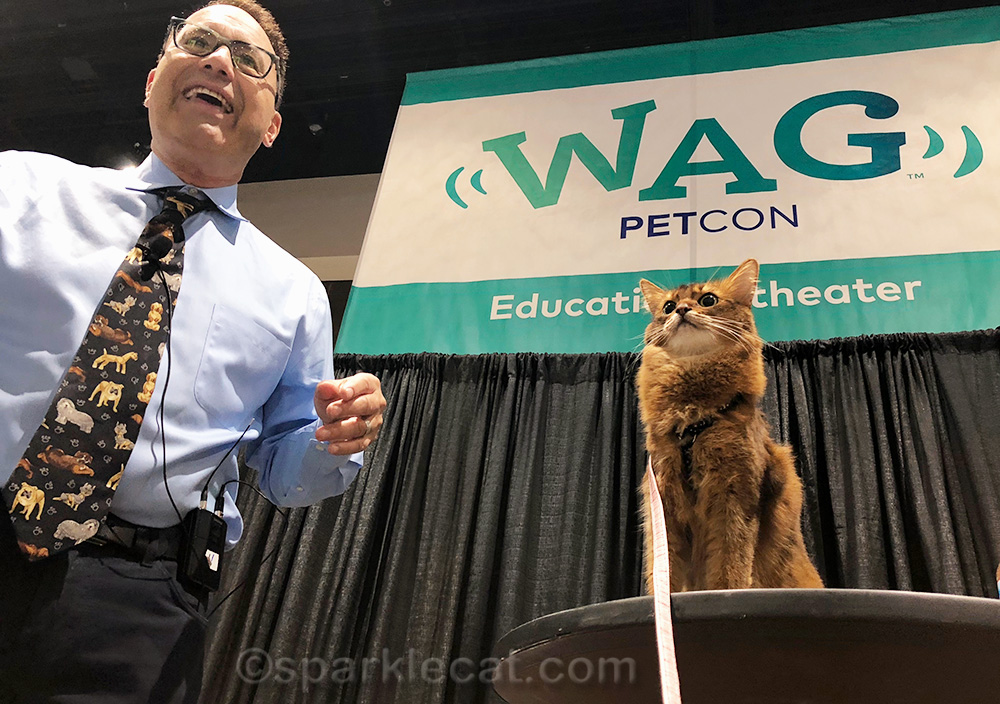 I think people enjoyed seeing me up there with Steve. It was a great end to a fun day! 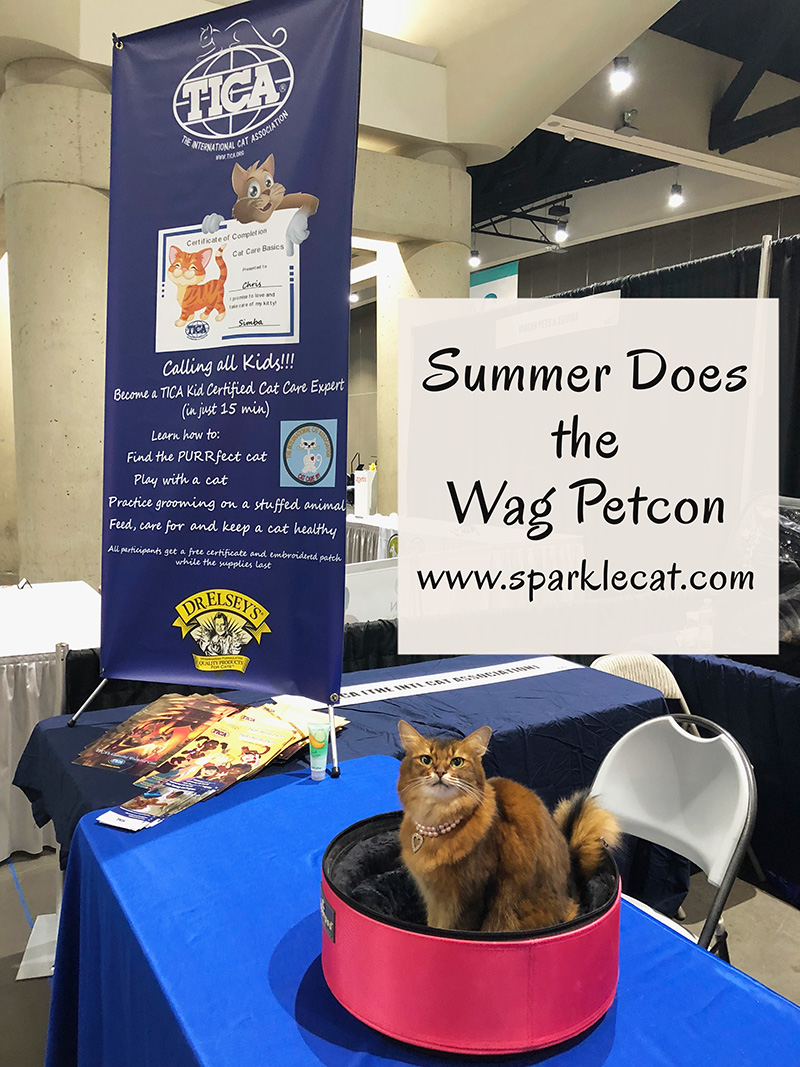