You are here: Home / Diary / Why I Love the Acro-Cats 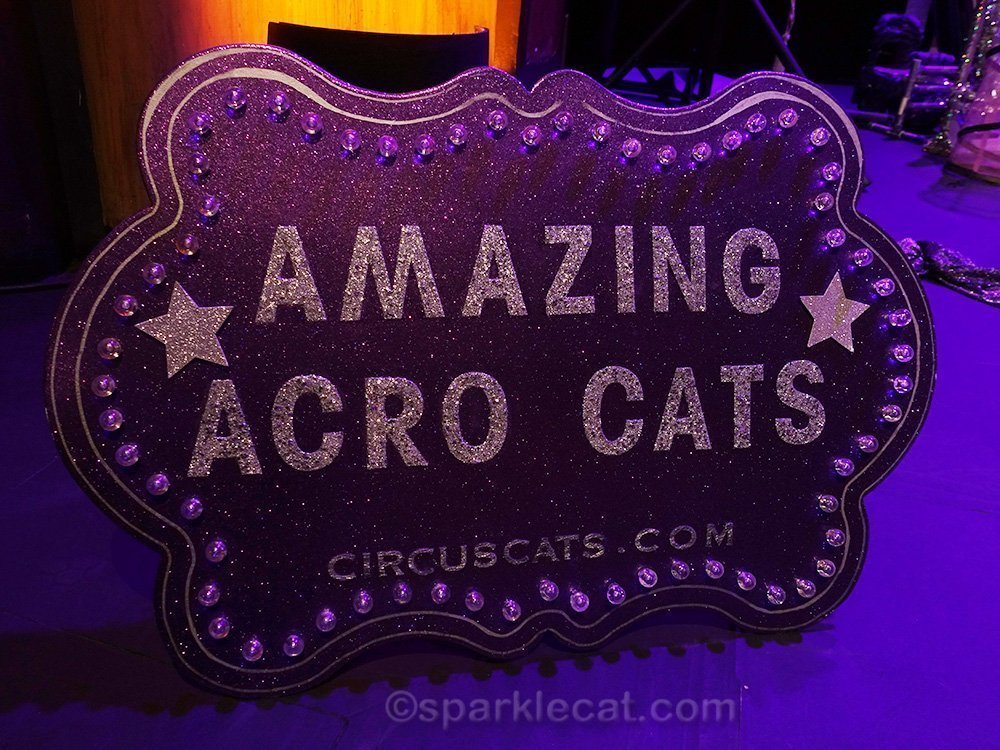 The Acro-Cats were in town this past week! 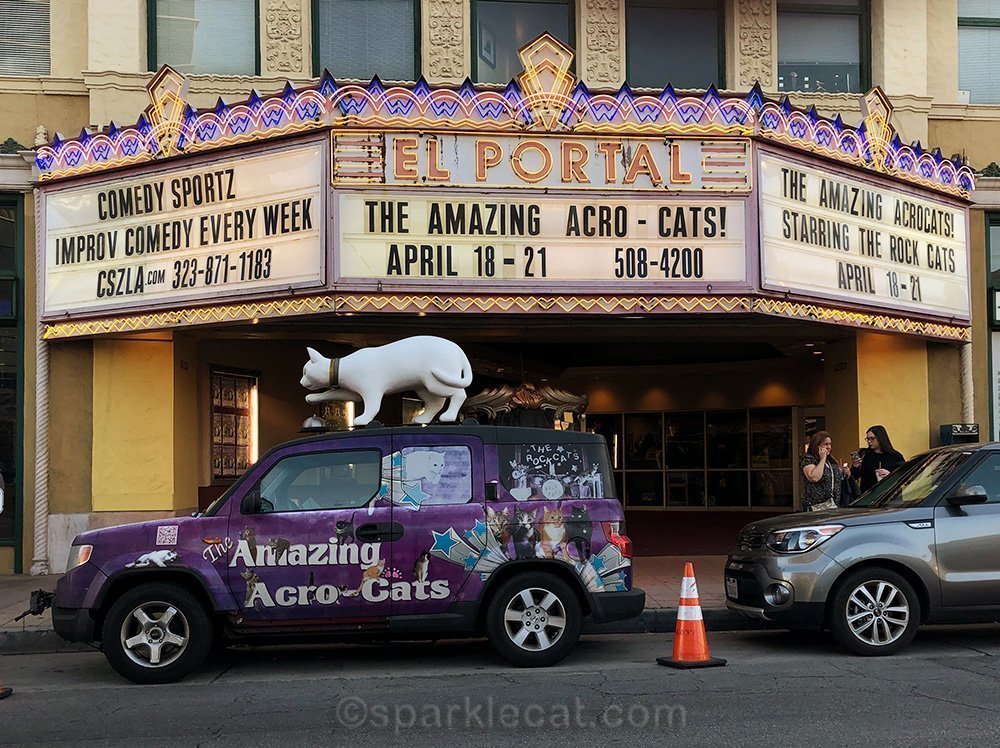 Of course my human went. I mean, how could she not? They’ve been an inspiration for her for years, and for me too. We have lots of reasons to love these touring kitties, and their head human, Samantha Martin. Here are just a few of them. 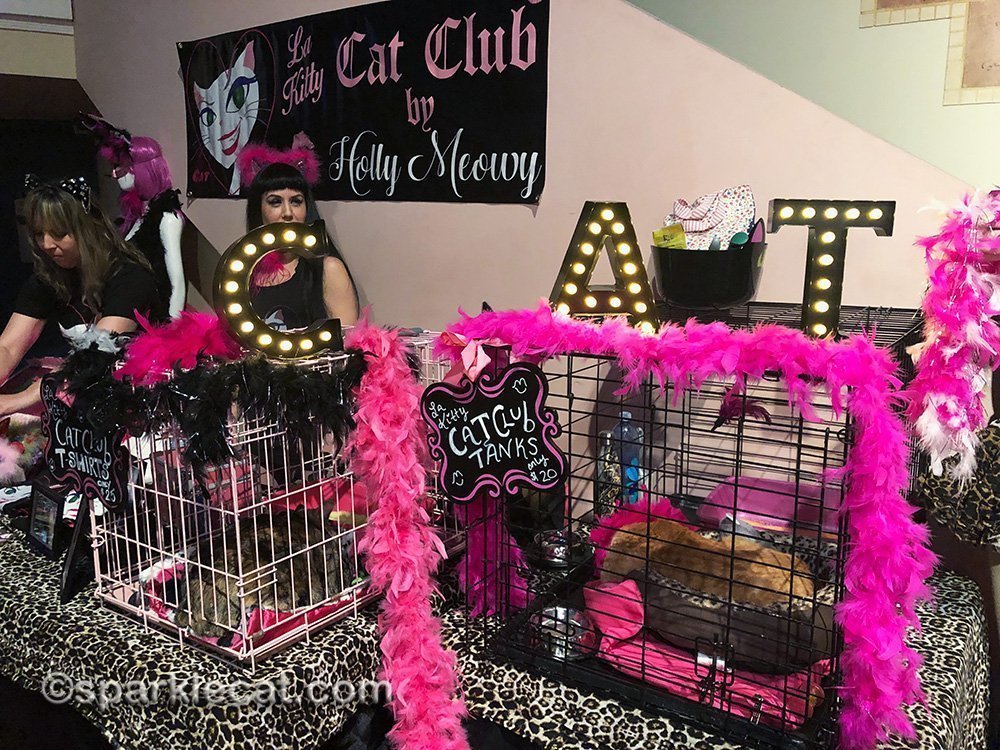 They work hard for cat rescue! Not only are the stars of the show rescue kitties, the Acro-Cats also promote cat adoption at the shows. At the show my human went to, there were even kitties for adoption, courtesy of one of our local rescue groups, The Cat Club. Samantha has donated many thousands of dollars to rescue groups all over the U.S. 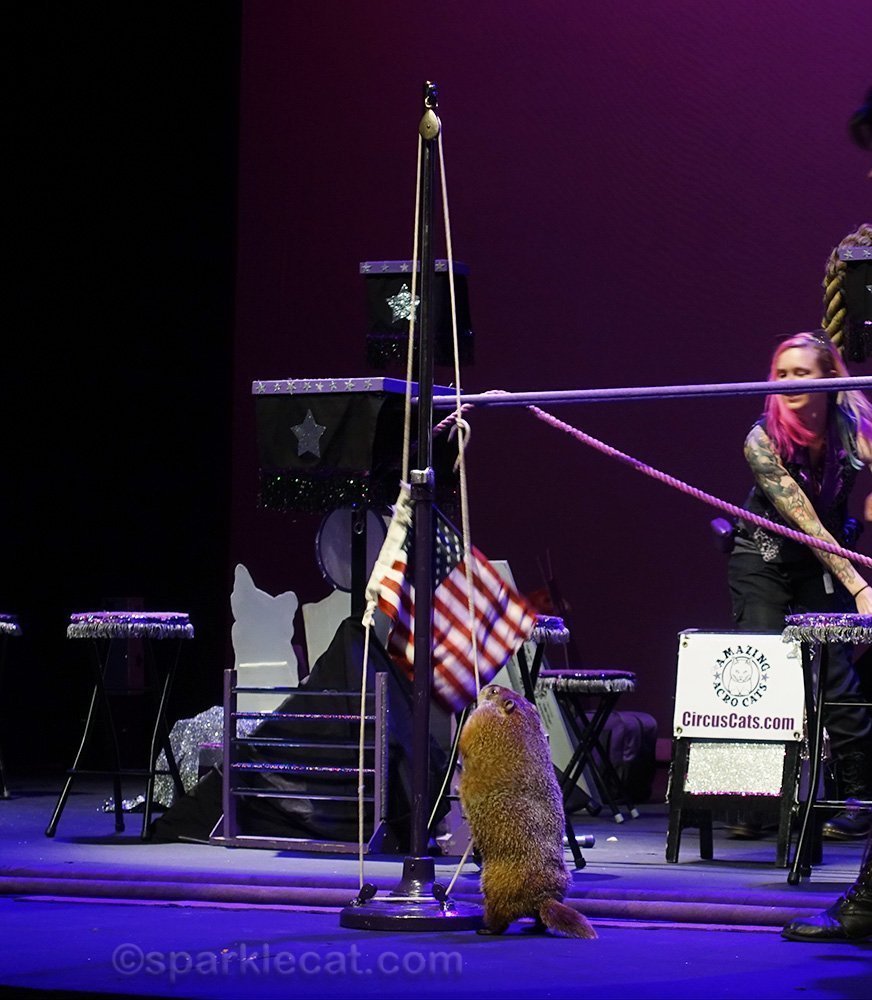 The Acro-Cats are actually more than just cats! There’s also a chicken, Cluck Norris, who can bowl and play the tambourine, some trained rats (rats are super intelligent!), and as you can see here, Griffin the groundhog, raising the flag. So even though the main attraction are the cats, there’s even more fun and more animals on stage! 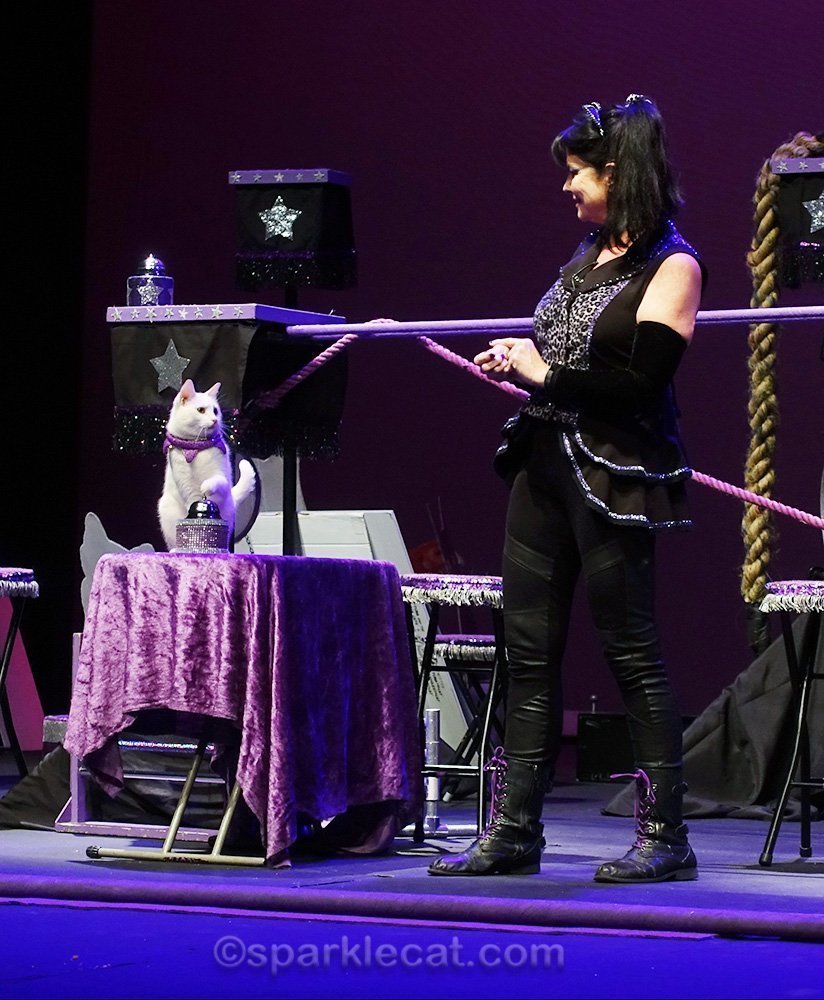 The tricks, of course! The cats all get their moments to show off. Their best trick — and one that Samantha says all cats should know — is how to run into their carriers on cue. Imagine how much time this would save in an emergency! I still need to learn that… although I am already really good about going in my carrier. 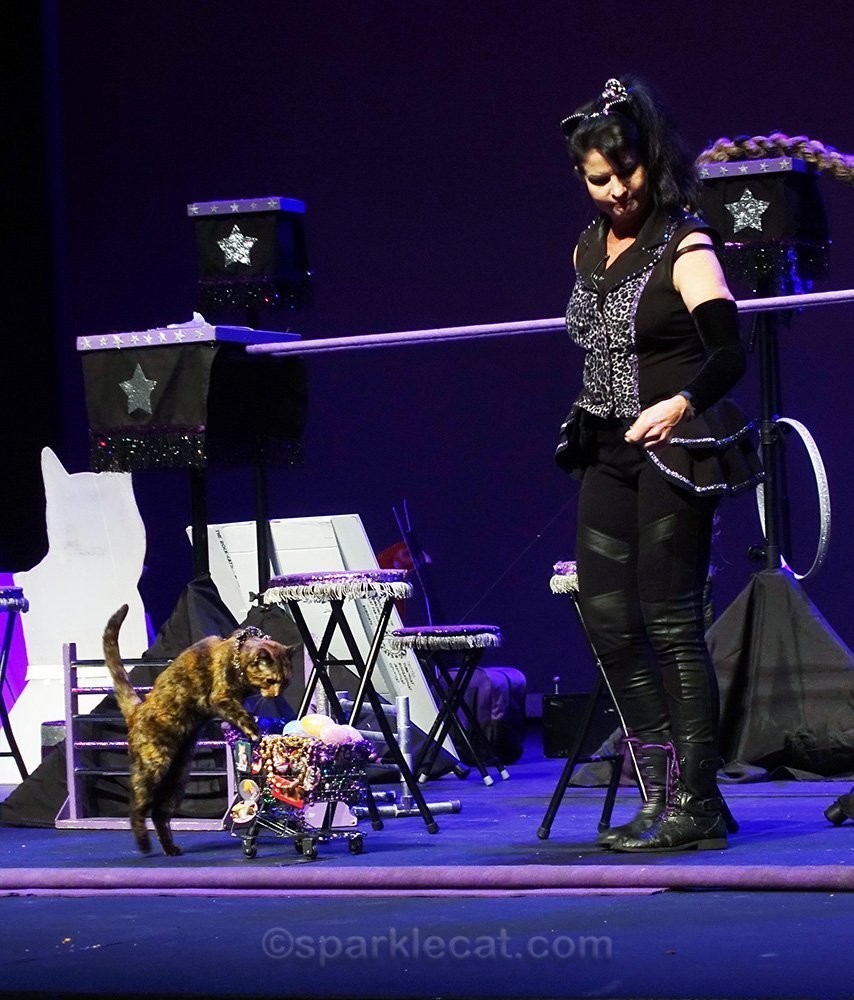 Each cat has her (or his) specialty. Here is Sookie (my human’s favorite… figures she’d like the tortie best!), pushing a shopping cart. She also rings chimes, which was a surprise talent nobody was expecting from her. Some cats are more accomplished than others, but they all have a place in the show. 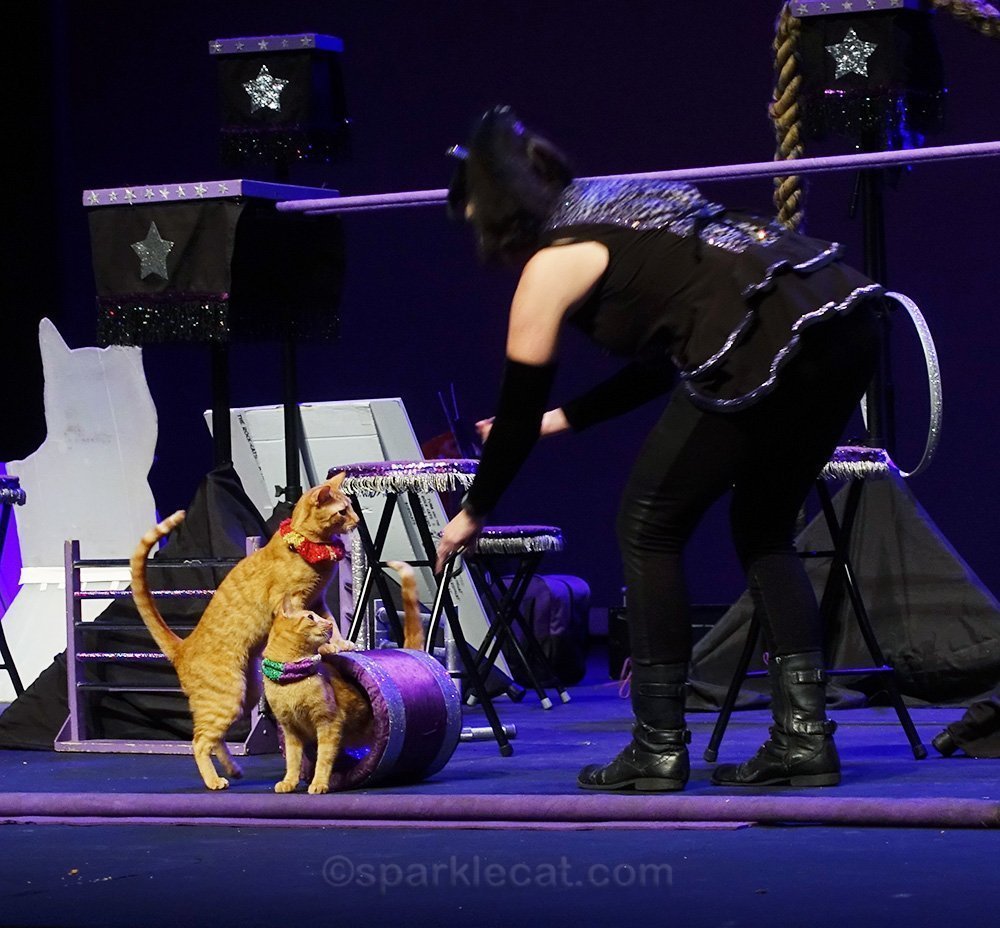 The shows are meant to be fun, not perfect. People sometimes worry that the cats are treated like circus animals, and forced to do their tricks. Well, number one, you can’t force a cat to do anything, and number 2, the cats display so much enthusiasm on stage. It’s clear they love performing. Because they are cats, the shows rarely run completely as planned, with a cast member sometimes deciding to jump off stage and wander through the audience, or a performer temporarily “forgetting” a trick. But that’s all part of the charm of the Acro-Cats. They’re spontaneous, and you are never completely sure what is going to happen next. They do get their tricks right most of the time, though. 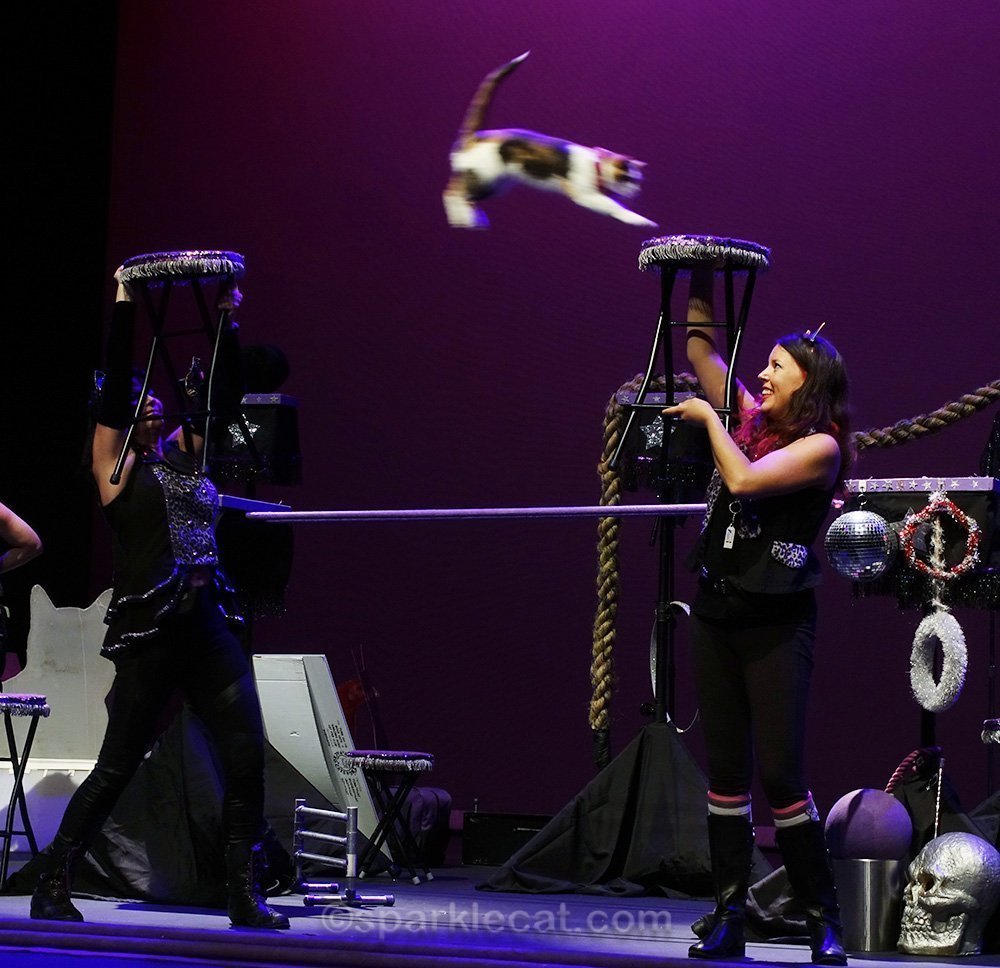 They’re in the Guinness Book of World Records! Alley — the calico streak you see here — holds the title of longest jump by a cat. She is pretty amazing! 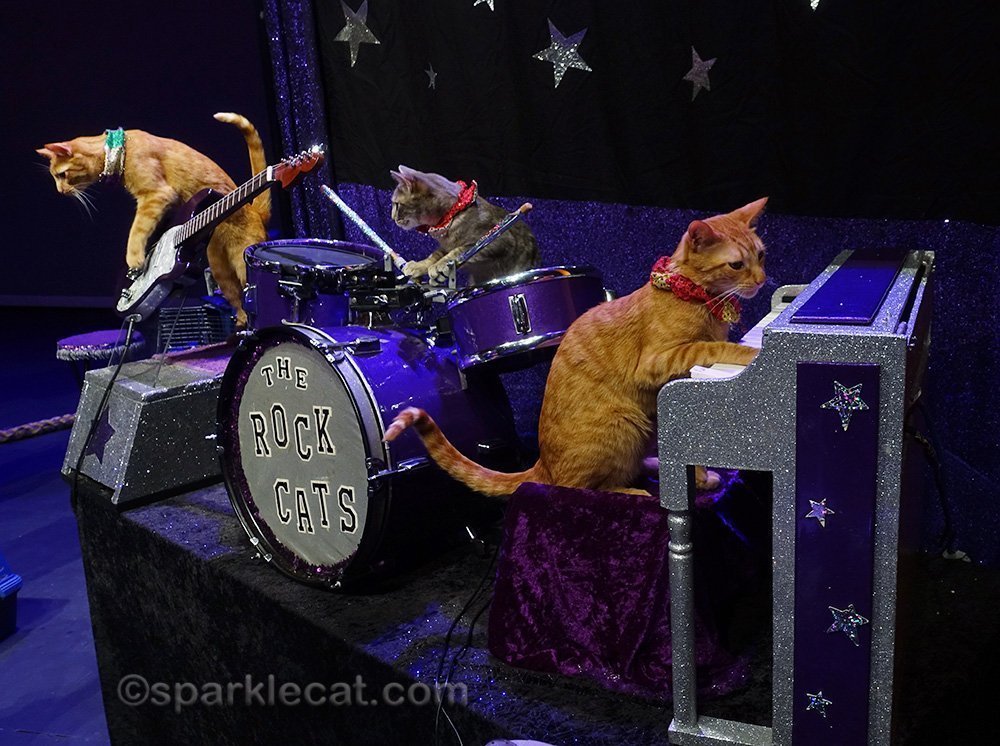 They have a rock band! The Rock Cats always end the show on a high note. They’ve featured different band members over the years, and this is one of their current lineups. 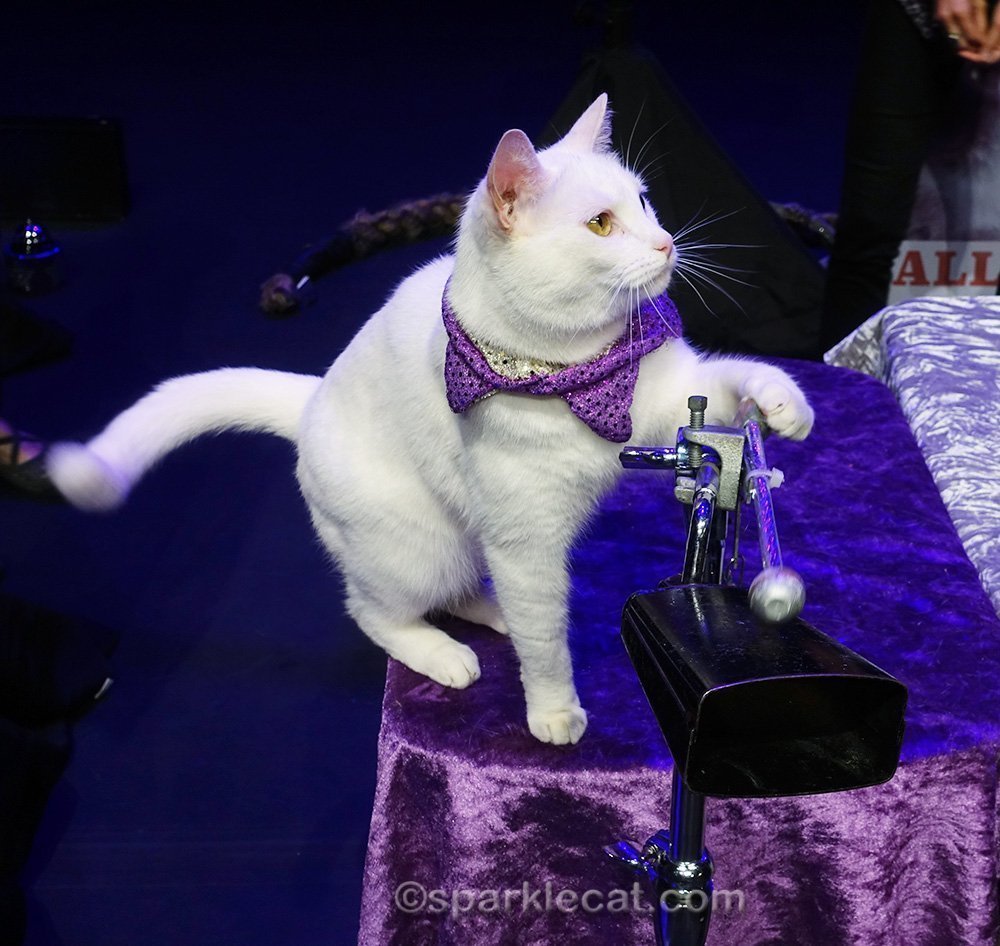 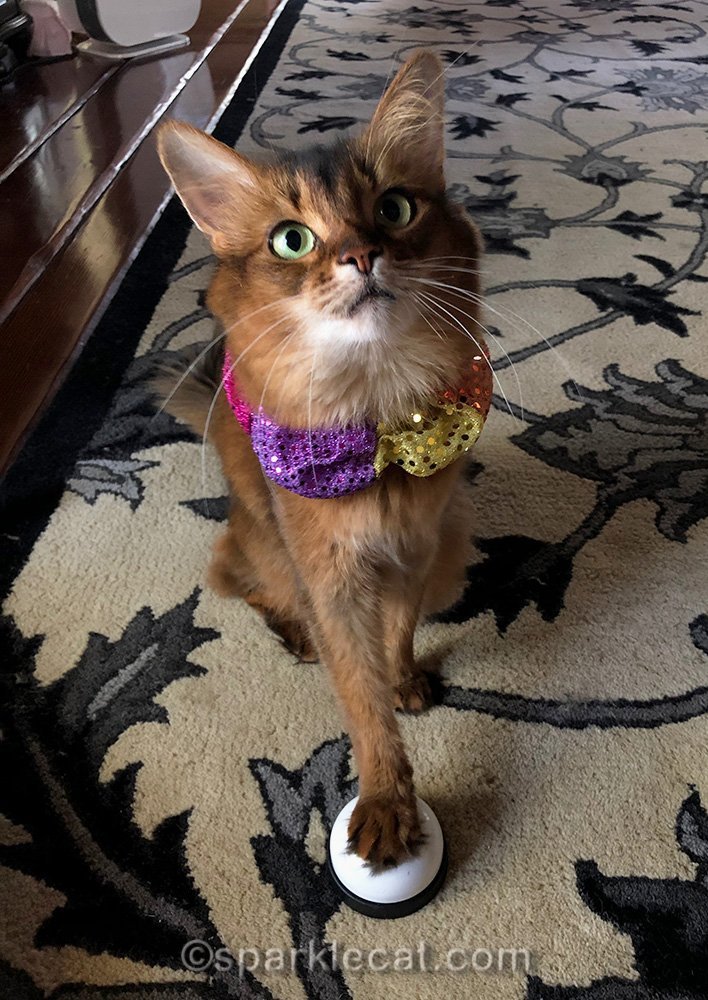 I wanna be an Acro-Cat! Do you think I would pass the audition?