You are here: Home / Diary / Walk for Hope Therapy Cat 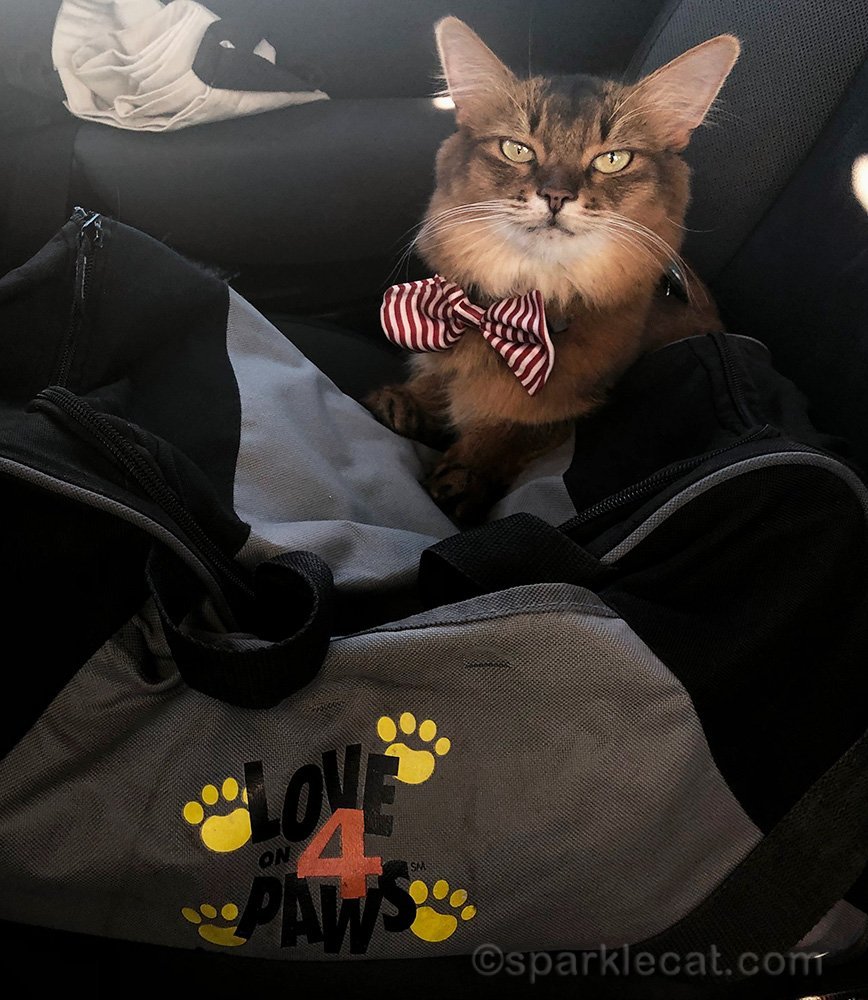 I did a really different type of therapy cat gig this weekend! I got to be at a booth for City of Hope’s Walk for Hope event. The facility itself is a leading research and treatment center for many diseases, but it’s most well known for its work with cancer. The Walk for Hope is a fundraiser specifically for women’s cancers. Survivors and supporters could do a 2K or a 5K walk, and the campus had lots of booths and music and food trucks. A company called Pednar sponsored our therapy pet organization so we could share a booth there. I was one of four therapy pets that spent time there in the morning. 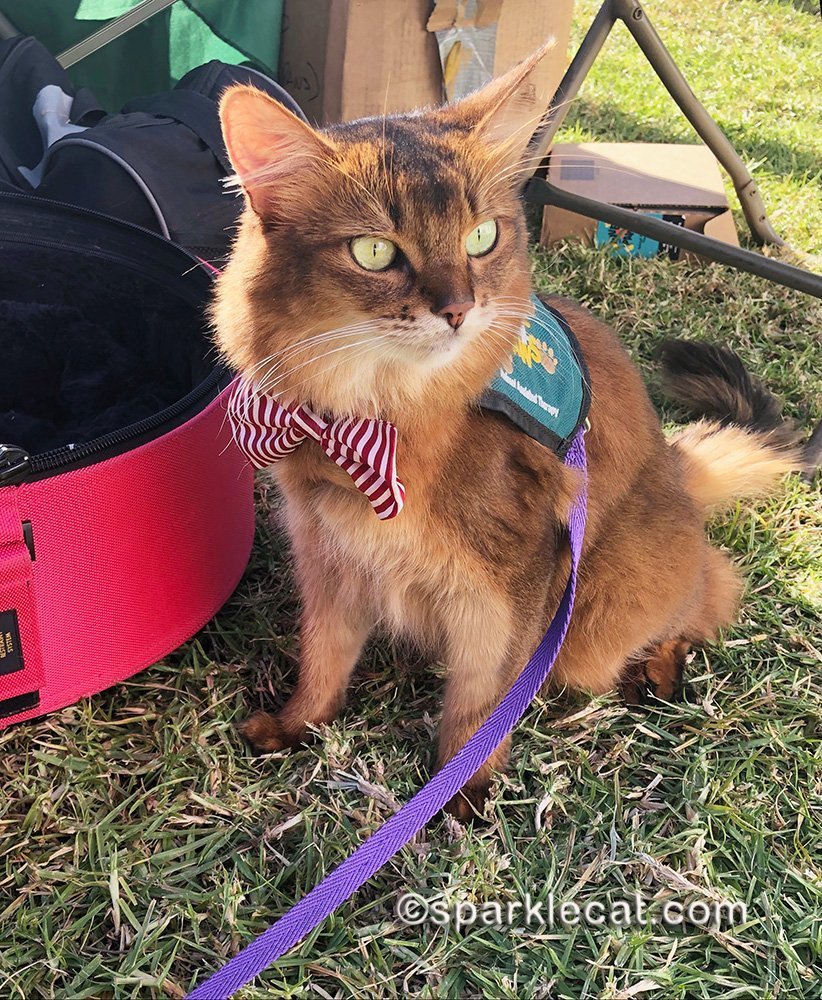 The cool thing about getting to come to this event is that normally, I don’t have clearance at City of Hope, so this is the one time I got to be there! I wanted to make sure that attendees realized that kitties could do therapy work too, since they only see the dogs during the week.

Even though it is the middle of autumn, it got pretty hot in the morning. My human’s biggest priority was making sure I had enough shade. She finally decided to sit my carrier down in a cool patch for people to come visit. Our booth was set up near the finish line, and it was quiet at first. Only a few people stopped by, and I got a little bored and wanted to wander on my leash for a few moments. Then, not long after my human and I returned, it got crazy! Hundreds and hundreds of people were coming through the finish line! Some of them had t-shirts or signs with the names of their loved ones on them. My human heard there was something like 10,000 people in attendance! Lots and lots of grown ups and kids stopped by to pet me and visit with me.

Mostly I curled up in the bottom half of my Sleepypod carrier and appreciated all the attention. Just about everyone was surprised at how calm I was. But why wouldn’t I be? Even though the atmosphere was party-like, it wasn’t like a regular expo or fair. I could sense that lots of these people needed my healing energy, for one reason or another. And I was more than happy to oblige. 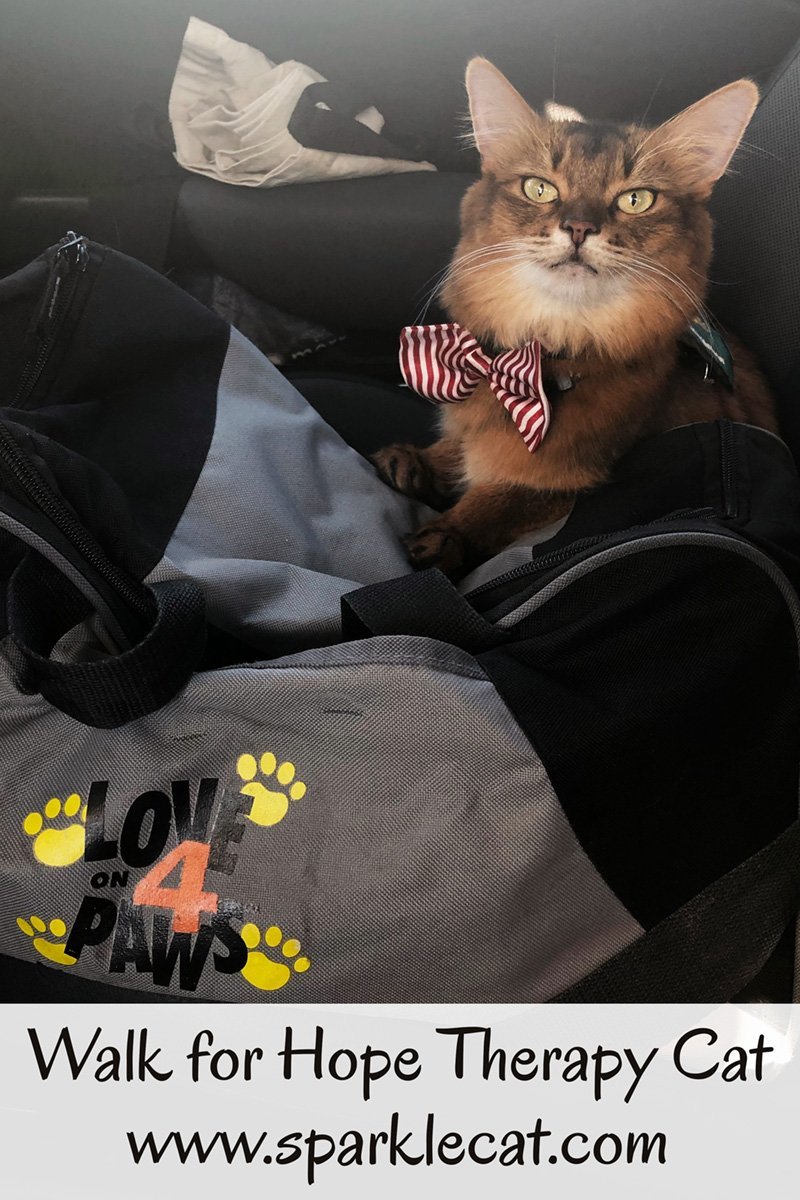