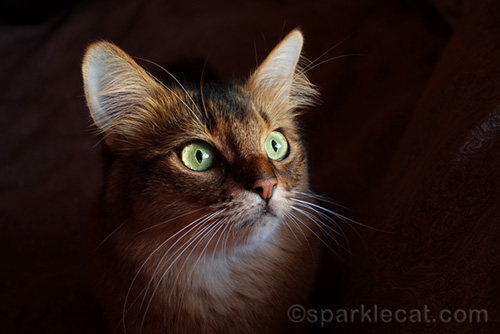 The last couple of days of our Vancouver trip, we stayed with some very nice friends! I think a lot of you know them: Critters in the Cottage. In fact, if you follow them, you may have seen me on their blog yesterday. 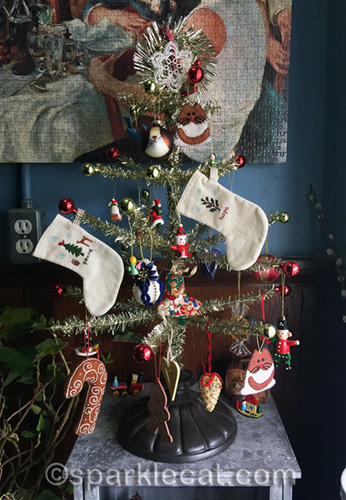 They don’t actually live in a cottage, but in a large building that has several apartments on the second level. It’s over 100 years old and very charming. When my human and I entered, at the top of the stairs was this pretty little tree. 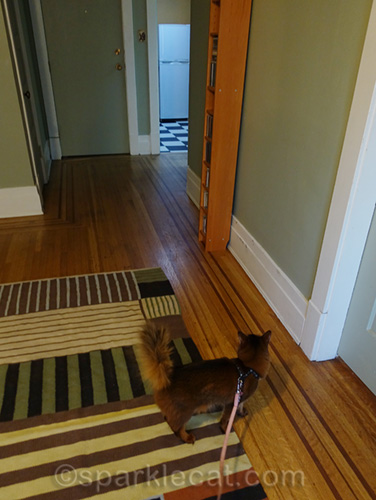 The Critters and their humans have several of the apartments to themselves, including one that they use for visiting family. This is where we stayed. 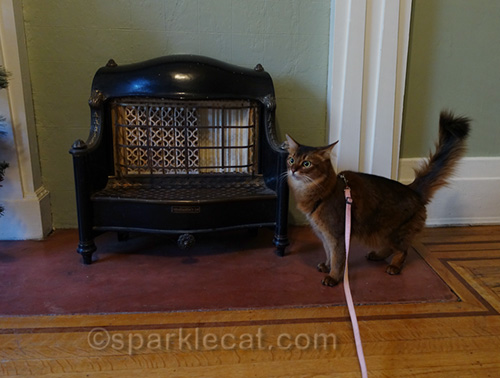 There were lots of cool details that you only find in old buildings. 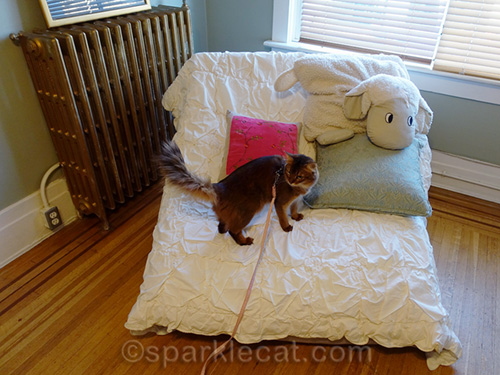 This was in the living room area. 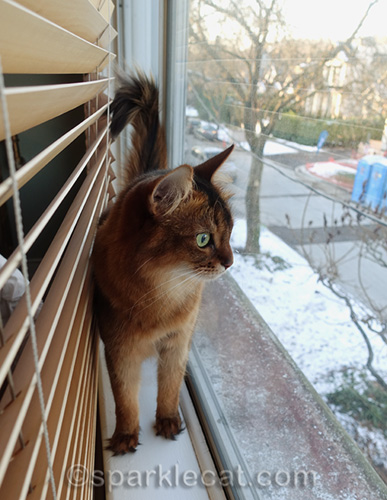 The view out the window was interesting, and there were lots of old homes down the street. Sadly, across the street, there was a big, modern structure going up. At least one nice, old building was torn down for the new construction. 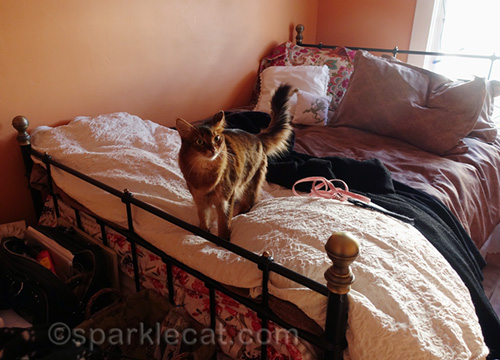 This is the bed where we spent the night, and where I spent most of my time. Because there were several nooks and crannies I could have gotten behind, especially in the kitchen, my human only let me explore the rest of the apartment on my leash. 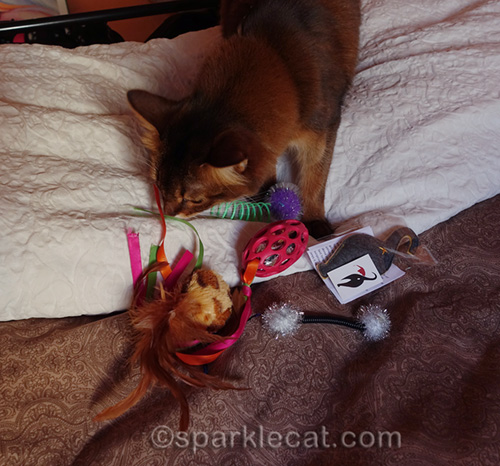 I didn’t mind too much, though, because the Critters in the Cottage human gave me some gifts! I loved these cat toys a lot. 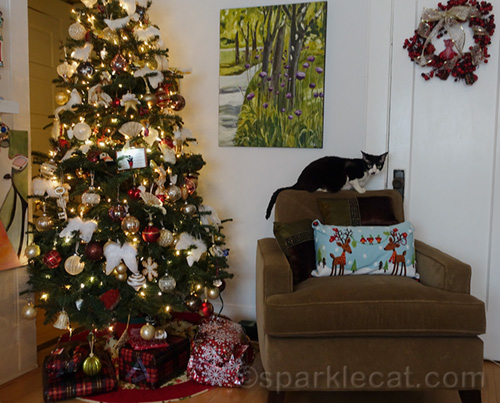 Although I didn’t get to meet the kitties — Mitalee, Esme, Malou and Levon — my human did! She didn’t get a chance to take photos of Esme and Malou. She managed to get a shot of Levon by the Christmas tree. When she gave Levon a small bit of one of my treats, he became her instant pal! 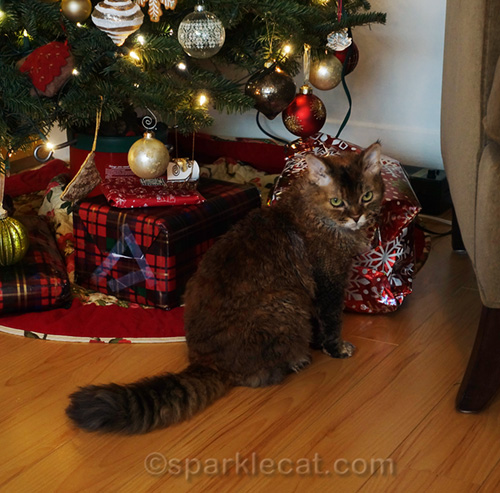 She also got a couple photos of Mitalee.

Usually, the cats are all over guests, but not with my human! Probably because they could sense I was down the hall, and my human had brought me. You know who loved my human best? 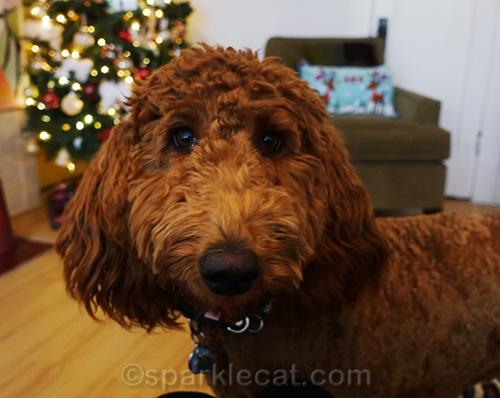 Wilhelmina! She couldn’t get enough of my human, which is funny because my human is not even a dog person. But she couldn’t resist Wilhelmina’s charm and cute face. 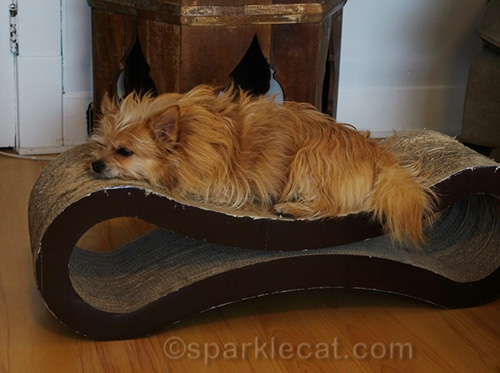 Duffy was also a big fan of my human’s. Duffy is a very unusual and special dog. I think he may think he’s a cat. 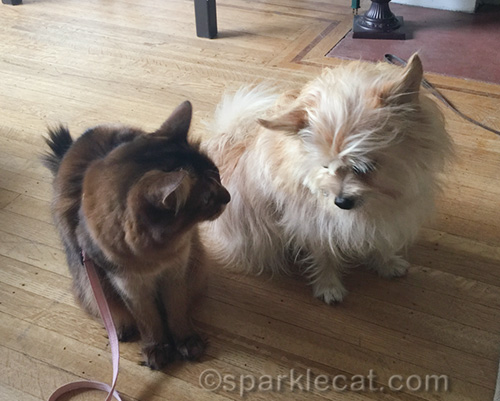 Duffy is the only Critter I got to meet. He was very polite. He only tried to sniff my butt a couple of times and stopped immediately when he was told, “No.” We got along well, and if I had stayed more than a day and a half, we might have been pals. 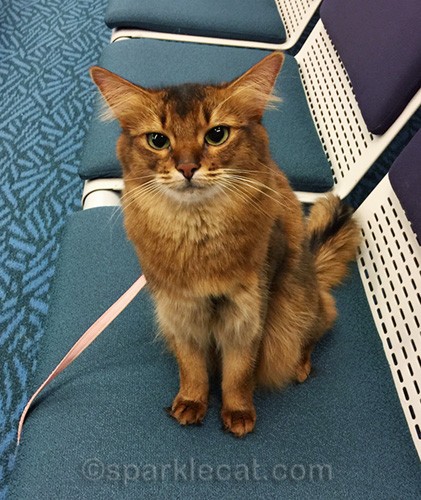 All too soon, it was time for my human and I to catch our flight back to California. The Critters in the Cottage humans were nice enough to drive us to the airport. It took a while to go through customs to get to our gate, but the whole way, I got admired by lots of people, including the security people! When we got to the gate, our flight attendants were waiting to board and they admired me too. 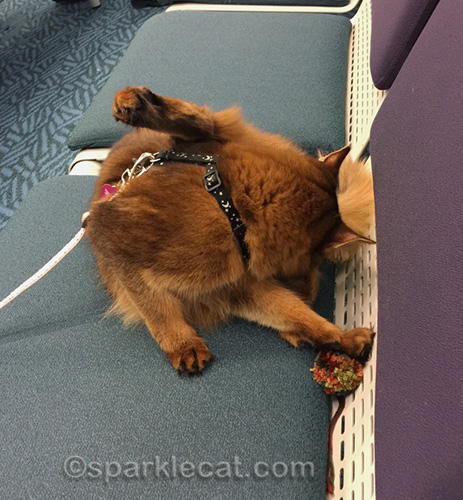 I’ve gotten really comfortable at airports. My human says I’m getting a little too comfortable. I don’t know what she means by that.